A Rough Ride to the Future, by James Lovelock 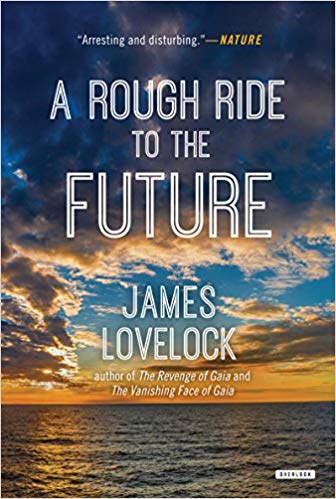 This book is a fun read by a scientific maverick, written at age 95. He’s now 99, still going strong. A prolific scientist and inventor, Lovelock is best known for two things: 1) inventing the electron capture detector, which detects particles in a gas in parts per trillion. It became the standard instrument to detect chemicals in small concentrations as in research on the ozone hole. And 2) The Gaia Hypothesis, that the entire planet is one big interconnected system, self-regulating to sustain life. That organisms are symbiotic is not controversial, but that inorganic matter is symbiotic with life is. Lovelock notes that life affects energy flows on earth. For instance, vegetation absorbs energy; hot rock reflects heat back into space.

Gaia is the Greek goddess of the Earth. Scientific doubters of the Gaia Hypothesis pose the Medea Hypothesis: huge prehistoric eruptions exterminating almost all life show that geology does not favor life. Lovelock counters that after each mass extinction, life evolved to an even more complex level, leading to homo sapiens. Each extinction was followed by more complex evolution. Organic evolution begins with microorganisms and aggregates its way up to the macro level. Discoveries over the decades tend to support the Gaia Hypothesis. For instance, scientists just announced that huge masses of anaerobic microorganisms live in the Earth’s crust down to a depth greater than 3 miles.

Lovelock’s asides attest to his vigor and iconoclasm. As a lad he detested school; says he is a lifelong self-learner. In the 1950s he froze and rejuvenated hamsters to show that cryogenic preservation of life is possible. He smoked for 30 years before giving it up for health reasons. Having no car, at age 94 he and his wife walked a four-mile round trip to a grocery and lugged their groceries home. Recent interviews show Lovelock as lucid and irascible as ever.

Lovelock calls himself an independent scientist, beholden to no one, but he does collaborate. His collaborator publishing the Gaia Hypothesis was Lynn Margulis. However, the electron capture detector leapt out of personal intuition. It worked. At first, he could not grasp why it worked, but it worked. Just because a phenomenon can’t be scientifically explained does not mean that it does not exist. Explaining why is science. Inventing out of the blue is creative. Lovelock has done both.

Lovelock detests groupthink. In science, he claims that it arises from too much collaboration. He also decries bureaucratic interference in science, committees to assure health and safety (the Precautionary Principle). He considers the green movement to be mostly political, backed by little moral or scientific evidence (do little; claim a lot; feel good about yourself). He’s been a proponent of nuclear energy because claims of biological damage from radiation are overblown. (Lovelock seems to have never assessed the return on energy of nuke plants, or deeply considered solutions to the quandaries of decommissioning plants and storing accumulating spent fuel rods for eons, much less doing anything to remediate old nuclear weapons test sites.)

Lovelock says that we’re dangerously addicted to cause and effect thinking – Cartesian rationality. He claims that St. Thomas Aquinas did not define deadly sin by Cartesian logic, but as unchecked feedback loop cycles, amplifying and spreading like an epidemic, out of balance with the surrounding environment.

In practice, overreliance on models and model building is more what Lovelock means by excessive Cartesian logic. For instance, he doubts that any individual vehicle designer can explain in detail how a modern vehicle works. Vehicles are designed as much by software systems as by people. Then designers lose the ability to intuit what might be going awry; for example, they can’t sense whether an instrument reading is probably in error.

The Outlook, Given the Gaia Hypothesis

Lovelock’s core message is that humans are trapped in climate change, too stupid and obstinate to do anything globally effective about it.

Why? We’re hopelessly addicted to global power games and much lesser self-serving follies. Therefore Gaia (nature) is evolving faster than humans can adapt. Our fate would be stalled if the human population reduced to 1 billion people on Earth by 2100. Can humans volitionally do this? Probably not. Gaia might do it for us – or to us.

It’s inevitable. Earth’s environment is going to hell. If humans can’t adapt to hell, we will go extinct. Only life forms that can adapt will survive. Gaia will preserve life in some other form until the Sun’s radiation expanding beyond Earth’s orbit kills all forms of life. Enjoy your foolish existence while you can.

Is this unbearably depressing? To most of us, I’d guess that it is; however, philosophers are beginning to strain their logic debating whether human extinction would be positive or negative from a big picture view.

So what’s in Lovelock’s crystal ball?

Lovelock proposes ideas to stall climate change. One is to compress people into small, climate-controlled bubble cities. He estimates that heating and cooling buildings under canopies would take much less energy than doing them individually. Besides, compressing inhabitants into walkable neighborhoods would curb traffic. Most things people want could be obtained without a vehicle. However, Lovelock leaves this scenario hanging. For example, would bubbles be self-sustaining or how would they otherwise be supplied?

Following the Gaia Hypothesis, Lovelock keeps pondering whether life forms not based on carbon cycles and water might be possible. “The Singularity” intrigues him. That’s the possibility that computerized life with artificial intelligence will soon become more intelligent than human life. Could AI evolve into a self-organizing, energy absorbing, self-preserving system, living on energy exchanges that don’t need water, carbon, or oxygen? Wet, carbon-based life systems are not long for this world by geological time scales, but non-carbon life forms could long endure, evolving far beyond mere human capabilities.

The promise of artificial intelligence is technological learning cycles much faster than humans. Would AI entities also develop “”emotional” self-preservation instincts? Could they coalesce intelligence into a program to benefit all Earth (Gaia), rather than fight for survival individually?

Unlike Compression Thinking, Lovelock’s Gaia Hypothesis is pessimistic that humanity can reform. His ideas are scattershot, but that’s the message. Coupled with Lovelock’s quirkiness, that message is what makes A Rough Ride to the Future a “fun read.” From the view of Compression Thinking, the book clarifies that if humanity is to have a future, we must quickly learn to help Gaia instead of screw her. And to do that we must acquire capabilities that we have not exhibited before.