Chasing the Scream: The First and Last Days of the War on Drugs by Johann Hari 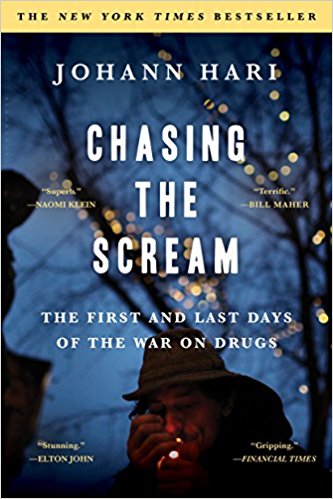 Johann Hari’s book interested me for four reasons; the first is that the author is a very talented, but tarnished young British writer. He won a number of writing awards in his first job, political writing for the Independent before being ignominiously fired. Under deadline he pasted in copy without attribution. That’s plagiarism.

Second, Hari did over three years’ well-documented research to write this book, but he buries facts and figures in stories that put human faces on the numbers. By slowing down and being thorough, Hari is obviously trying to repair his tattered reputation, so let’s cut a young guy some slack and see what he’s got.

Third, as a political columnist, Hari advocated decriminalization and legalization of drugs without knowing much about addiction. Maybe it would be in Hari’s best interests to research The Disease Model of Addiction. His book recounts his adventures researching the causes of addiction and the origin of the War on Drugs. At the end he still advocates decriminalization and legalization, but from a more nuanced view. He learned to examine all sides of the issues.

Fourth and best, Hari’s findings prompt more questions than he asked. Like, if a craze is not associated with a chemical, like gambling or video games, is it still an addiction? Is overeating an addiction? Is dependence on cheap energy a form of addiction? Is clinging to false beliefs about addiction actually a form of addiction, or is it better described as a phenomenon that the psychiatrist Carl Jung termed a “psychic epidemic?” (Jung’s take on this paradox is classic, “Our present lives are dominated by the goddess Reason, who is our greatest and most tragic illusion.”)

Why do people become addicts? Two thirds of drug addicts suffered traumatic abuses in childhood. Each major childhood trauma ups the chances of adult addiction two to four times. Many addicts want to numb their minds to mental demons like PTSD. Depressed and lonesome, addicts substitute chemical comforts for human ones. This insight is not new; listen to the lyrics of old country songs like “Whiskey River.” Or note that Native Americans instinctively sense that they become addicted because they are aliens in modern society, living lives that have lost meaning.

A more novel insight is that social interaction, a renewed purpose for living, can bring most addicts out of it. Ostracizing and punishing addicts depresses them further.

However, public perceptions and government policies are trapped in fear-fueled beliefs that addiction is chemical enslavement that makes addicts depraved and violent. Therefore force addicts to go cold turkey by eliminating their access to drugs. Jail them and their dealers. Destroy every stash you can find.

The crime filled fiasco that was Prohibition should have put the lie to these beliefs. Instead we began the War on Drugs. Eventually it too must go the way of Prohibition – and for the same reasons.

Hari traces how we got hooked on the War on Drugs. Harry Anslinger set the hook. Well connected, Harry was appointed Assistant Commissioner of the Bureau of Prohibition in 1929; then Commissioner of the Federal Bureau of Narcotics from 1930 to 1962. After Prohibition ended in 1933, his agents had too little to do. To justify their existence, they needed a new enemy. Harry invented one – marijuana.

Harry either grossly exaggerated or flat made up stories about marijuana users losing all control and becoming violent. Being racist, he claimed that marijuana implanted in black men an insatiable lust for white women – and other wild tales. Harry could never control the flow of drugs, but he became a master manipulating the media to control the flow of ideas. By both legal and illegal means he intimidated all critics including the American Medical Association after it issued a report debunking his flamboyant claims. If you would like to grow some marijuana yourself, and would like to check out what equipment to buy then you could check out https://ledgrowlightshq.com/best-grow-tent-reviews/.

On his deathbed in 1975, Harry’s doctor told him, “You have led this country to treat scientific questions the way such matters were handled in the Middle Ages.” Harry’s deceptions – and his War on Drugs – are with us still.

The biggest benefactor of prohibiting liquor and drugs was Arnold Rothstein, the father of modern organized crime. In the 1920s he was the undisputed boss of the New York City underworld. (He and his showgirl wife were role models for the musical, Guys and Dolls.) First with alcohol, then with drugs, Rothstein quickly seized the lucrative potential in selling illicit substances. By the mid-1920s, he “owned” the alcohol and drug traffic on the East Coast – and big swaths of both New York politicians and police. Until he was shot dead in 1928, Rothstein was “the man.”

Nicknamed The Brain, Rothstein began his underworld career gambling on dice, cards, and sports. He tried to rig every game he played, and allegedly paid off eight White Sox players to throw the 1919 World Series (the Black Sox scandal). He converted Mafia organizations from extortionist thugs into corporate-like hierarchies with compartments and controls based on fear. Two of his protégés were Meyer Lansky and Lucky Luciano.

Hari psychoanalyses Arnold Rothstein as the prototype of all drug dealers, from block captains to kingpins (he interviewed some). Arnold epitomized money-obsessed management by numbers. Exceptionally astute calculating odds, Rothstein regularly paid people to fix a game (e.g. pay a jockey to throw a race). Never give a sucker a break. Enforce control. Never show weakness. Rig every game. Always make losers pay; reject all sob stories. Miss paying The Brain; expect a hit man to dislodge your brains from your cranium.

Rothstein’s methods and mentality are the modus operandi of drug lords everywhere. Show any empathy for drug users and you lose your nerve. Never snitch. Defend your territory from all rivals; kill them if you have to. Buy off or intimidate the authorities.

Against this, law enforcement loses. The only way to quell drug violence is to take the money out of the racket: legalize drugs. Total drug use may not decrease, but it is apt to be by more people taking less adulterated drugs, so there are fewer overdoses, less disease, and much less violence. Connect addicts with society, jobs, and a meaningful reason to be alive, and most will taper off or quit. Human connections replace chemical habits.

Hari traveled to several locations where such programs exist now. He tells the stories of the heroes of transition in Vancouver, BC; Switzerland, Portugal, and Uruguay. The most unique leader was the former president of Uruguay, Jose Mujica. The world’s poorest president, he refused to live in the presidential mansion, but with his wife in their old tin roof shack. Shunning the presidential limousine, he rode the bus.

In every case, addicts are accepted back in society. Most wean off drugs themselves, but of course, new addicts are always coming on. Treat them the same way, and most will continue to function – like functional alcoholics that we all have known.

The benefits to addicts are obvious. To the public, the biggest benefit is safety – a drop in crime rates, first by desperate addicts or gang leaders, and second when police shift attention to crimes other than drug-related violence. If no longer perceived to be corrupt, public confidence in police and officials rises. Youth heed drug counseling if it is not loaded with scare stories that they know are B.S.

But Hari learned that legalization does not bring total peace; merely a big reduction, and he has reservations. One is deciding what chemicals like fentanyl still should be prohibited because they are extremely dangerous to anyone’s health, even if taken in small doses or in combination with other drugs.

But the most serious issue is persuading fearful people to establish such programs; then persuading them not to abolish them. A hundred years of lies are not dispelled overnight, and the dealers and jailers whose livelihoods depend on addiction do not want the War on Drugs to end. To build confidence, political tactics may have to advocate change in stages. To make anything stick, a cultural shift must address the compound fears of drug addiction, public safety, health care, racial conflict, poverty, sexual taboos, and maybe even the environment. However, to tackle all this tied together, perhaps we must neutralize paralysis by fear and encourage more systemic thinking.

Back to the questions that Hari’s work summons, how many other pressing social and environmental issues stagnate in conflict because of misplaced beliefs? Can we dispel the stagnation by becoming vigorous learners?