An American Sickness: How Healthcare Became Big Business and How You Can Take It Back by Elisabeth Rosenthal, MD 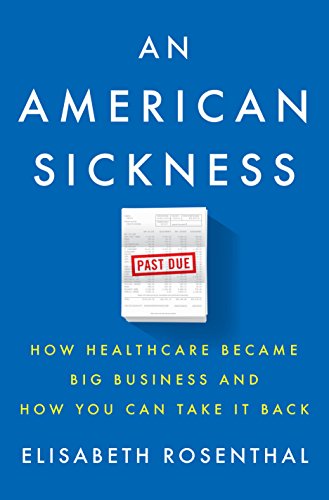 Why does curative care cost so much? Rosenthal explains many of the reasons by muckraking American healthcare in gory detail. Not only an experienced MD, she has written on medical topics extensively for the New York Times. Rosenthal states names and places uncovering dirt that is fresh even for healthcare scandal fans. She follows this up with detailed suggestions of what you can do about it as a patient and what we can do collectively. She proposes no magic solution, but thinks that we drifted into this mess slowly; we will work our way out of it slowly.

Rosenthal presents a brief history of medical advances warming up to how curative medicine became a dysfunctional market. All players, including patients, are subjugated to schemes for financial gain, seemingly guided by 10 “rules,” each of which are cited several over and over to explain more harrowing tales than can be recounted in a review:

The dark labyrinths of medical system finance are often unknown to physicians until they too are surprised. The arcana of insurance contracts and cross agreements that constitute service networks are difficult to fathom. This complex system thrives in a deep, dark woods of co-pay formulas, manipulation of medical billing codes, no legal requirement to approve a drug beyond minimal evidence of efficacy – and on and on.

Of all Rosenthal’s vignettes about the resistance of the system to shrink itself, one tale stands out: Dr. Denise Faustman of the Harvard Medical School and her finding that BCG can reverse Type 1 diabetes. BCG is an old vaccine against TB, and a cheap generic for many decades. No company can build an attractive business model around it, and curing diabetes would wipe out the income stream from all the lifetime treatments now on the market. Technological disruption is attractive only if it adds to revenue (Rule #2, above).

Dr. Faustman has completed limited clinical trials with great success. Unable to attract money from the usual foundations to finish clinical trials that would meet FDA approval, she is now trying to crowdsource $25 million, and this is unusual because there is no commercial sponsor. In the meantime, at the annual meeting of the Children with Diabetes Foundation at Disney World, all the joyful children there wish for a cure, while sponsors of the meeting focus on selling ever costlier treatments and supplies.

Rosenthal’s stories of the bloat in medical supply chains (outsourcing) have parallels elsewhere in business. Outsourcing of bioptics is an example. A hospital can send its biopsies to a distant lab; the specimen may degrade in shipment, but it costs less, especially when the distant lab transmits the images to a third distant, cheap lab for interpretation. The patient and the insurance company pay more for delayed, lower quality outcomes, but the hospital makes more money by externalizing this cost. But the worst aspect is that the hospital loses the specialists to do this on site, and loses the means to train residents in how to do it. Skills degrade.

A dull, but telltale story of commercial thinking invading medicine is the demise of the century old Physician’s Desk Reference (PDR), a huge manual issued annually that described all drugs, their effects and their side effects – a dry fact book. It could not survive the opportunism presented by funding its conversion to the digital age. The digital PDR morphed into just another vehicle promoting drug ads.

Rosenthal dredges up many more sordid sagas of hard-hearted commercialism, but cites more reasons for high costs than greed. First, patients vaguely sense what’s happening, so they are too timid to ask pointed questions – plus their cultural bias is that more treatment and more expensive treatment must be better. Second, physicians’ fear of litigation is real, so going with the safe, high-cost flow is prudent. And third, the big operators with big money drive many of the more conscientious practitioners out of medical care. Go with it and make money, or oppose it and go broke. That’s the system today.

What to Do About It: Rosenthal has no magic wand, but proposes many actions to begin to restore integrity to curative care – and she concentrates on curative care. One is for patients to become much more inquisitive, and she has suggestions like researching your own symptoms as best you can, and check the ratings of the institutions and doctors you will use. Keep notes during procedures to use later if you question a billing, and 50-90% of audited hospital billings have errors. Always question or complain in writing and insist on written responses. Thus you build the basis of a legal case if needed.

Other suggestions are for regulatory change. Here are a few:

Rosenthal has so many stories and recommendations that her book is informative even for those who try to keep up with the curative care world. She is a proponent of preventive health, but this book was not written to address it.