The Unthinkable: Who Survives When Disaster Strikes – and Why by Amanda Ripley 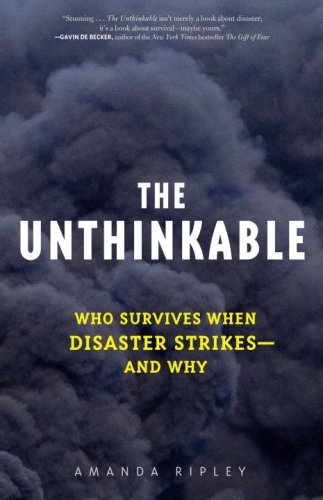 All the way through, Amanda Ripley’s book reminded this reviewer of the Boy Scout motto, “Be Prepared. And for what? For anything, of course. The expanded explanation is, “you are always in a state of readiness in mind and body to do your duty.” This theme is not new, and not confined to scouting. The Coast Guard motto of Semper Paratus means always ready, and the Marine Corps Force Recon motto was “Improvise, Adapt, Overcome.” All would be great mottos for Compression Thinking in the coming era in which protecting all life takes precedence over get as much as you can.

Amanda Ripley is an investigative journalist who digs deeply into subjects of interest. Interviewing survivors of the 9/11 Trade Towers disaster provoked her curiosity about how humans behaved in other disasters. She is praised for reporting facts accurately and in lively prose. Artful turns of phrase reveal insights such as, “One accident led to another, until a fault line opened up in a civilization.”

The Unthinkable became a PBS documentary. The trailer, still available on YouTube, encapsulates a few punch lines from the book. At the end Amanda says that your brain wants to help you survive in a world gone by, but it can’t in a modern disaster unless you have trained it to override instincts. Evidence of Amanda’s perseverance digging up new insights is her 18-minute presentation on K-12 education.  She mines data to look for root causes expressed by real people – new insights, not statistics testing preconceived ideas.

Ripley opens with the history of the Halifax, Nova Scotia explosion of a WWI ammunition ship in 1917. It devastated Halifax and its surrounding area, taking at least 2000 lives. She zeroes in on the story of Samuel Prince, an Anglican priest in Halifax, who in wonderment chronicled what he saw. How was a young soldier able to work an entire day after one of his eyes was knocked out? Prince became a pioneer in human behavior in disasters, research of a kind that still languishes in specialized crevices. Ripley scrapes the crevices to pull information together.

Survivors want to tell us how we can better prepare for whatever might happen, but we don’t want to heed much of it. Preparation is a distraction. Media flock to disasters to cover the drama, but without garnering lessons learned. The time and effort needed for full preparation today seem as unthinkable as the horrors of disasters tomorrow.

From Halifax to Nightclub Fires to Shootings to 9/11, Ripley tells the stories, classifying the behavior seen as denial; then deliberation; then the decisive moment. She actually visited Mecca during Hadj to learn how hundreds of pilgrims can be crushed in a stampede. Crowds are so dense that you can only move with the crowd. This inhibits normal breathing. If for any reason someone has to get out, waves of crunching calamity quickly spread.

Ripley documents heroes of disaster that were ignored ahead of time. One was Rick Rescorla, security officer for Morgan Stanley in the Towers on 9/11, and also when a truck bomb exploded in its underground garage in 1993. Rescorla proposed more security in the parking garage to prevent a recurrence. It was ignored; too expensive probably. He was an annoying drill sergeant prodding employees through evacuation drills.

On 9/11 Rescorla would not leave the building until all his charges were out. Going back for a few procrastinating dealmakers, he was still inside when it all collapsed. Thirteen people, including Rescorla perished; 2,687 lived on. Ripley describes Rescorla as the most valuable investment Morgan Stanley ever made.

Ripley examines why we prepare poorly. One is excess legalese and fear of litigation. As an example she cites Mayor Ray Nagel of New Orleans delaying a mandatory evacuation order during Hurricane Katrina. He was waiting on a legal opinion whether business owners could sue for loss of income if the evacuation proved to be unnecessary. (The city was sued anyway.)

Because of legal CYA we confuse real safety messages with warnings not to use hair dryers in the bathtub. Schools drop driver training for fear of litigation. And how many drivers’ ed courses really prepare students how to avoid accidents and what to do if they have one?

On a bigger scale, Ripley recommends regular, repeated training of the public on how to respond during earthquakes, floods, terror attacks and the like. After a surprise, the most crucial lifesaving is by civilians before emergency professionals can arrive on the scene. She thinks much more emphasis should be placed on local Community Emergency Response Teams. There are 2,300 or so across the United States. Capabilities range from excellent to dismal.

My thoughts reading The Unthinkable were on how it paralleled Compression Thinking. Disaster researchers know that to take the right action immediately, you have to practice until the imprint will show up on a brain scan. Likewise with Compression changes that may be decades in the making – or be thrust on us as instant catastrophes. We don’t know the timing, but we can prepare.

To prepare for Compression consequences, we need two thrusts. One is new practices for production and for living. Many techniques are known as the R’s: Reuse, Repurpose, Re-Manufacture, Recycle, and so on. There’s much more, but the key element driving a new system is a change in our values from maximum consumption driving our economy to minimal consumption preserving the health and safety of the environment, thereby improving our own resilience. Optimistic resilience and preparation are the keys to survival.