Being Wrong: Adventures in the Margin of Error, by Kathryn Schulz 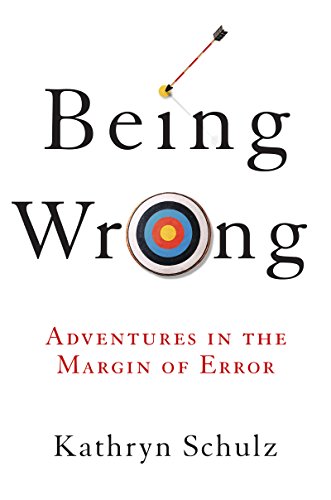 Kathryn Schulz is a professional journalist and writer covering a broad range of topics. This book was her foray into heavier non-fiction topics, and she researched it well. It’s been out a while, and well acclaimed. Obviously leaning on a liberal arts education, she covers wrongness from many different angles. Although a bit wordy, she gives short shrift to the usual quality and statistical approaches to error and dwells on error from historical and behavioral perspectives.

The book begins by noting that our capacity to err is central to human cognition. It’s how we learn. It lets us have adventures. And it’s the basis of our better qualities: empathy, optimism, and imagination. If we could not visualize something that does not exist, we might or might not make fewer mistakes, but our existence would be joyless. We could not suspend disbelief to “get into” novels or movies. Error distinguishes us from machines. Long before Rene Des Carte, St. Augustine posited, “I err; therefore I am,” or to err is to be human.

But we can’t stand to be wrong. We choke accepting our own mistakes, but relish nailing others to the wall with theirs, but this depends on the size and nature of error. Blurting that we grabbed the wrong car keys is easy; concluding that our lifetime beliefs might be wrong is hard. Our self-concepts are invested in beliefs, so acknowledging error in them is to acknowledge that basically who I am is wrong – and perhaps descend into a suicidal funk. Changing beliefs is a major think-it-through, soul-searching churn.

We can’t remember old errors either. Error gnaws at us until we accept an alternate explanation. Then we create something new to overwrite the old in our memories, because psychologically we can’t stand a state of prolonged wrongness. That’s excruciating. Avoid it.

Accepting error in basic beliefs is so tough that we are inclined to hang on to them, inventing wild rationales why they cannot be wrong. To flip, we must assimilate reasons for it until we can argue for the new belief and claim that we have never thought otherwise. “That’s what I always said.” Schulz terms this the “hinge point.”

That’s why telling others that they are wrong about basic issues is counterproductive. They dig in their defenses deeper until theysee a reason to change beliefs. Instead, suggesting a new belief that puts them on the right side of the angels, and let them think it through.

Schultz contends that error is integral to our humanity, and perhaps to all life. We cannot eliminate it by biological evolution, including genetic engineering. Nor will it disappear through technical advance, a utopian society, or spreading the Word of God.

Schulz also whiffles through the usual examples showing that human perception is deeply flawed: optical illusions, limited spectral detection, and being limited to only one perspective at a time. No way can we know everything – but we like to pretend that we do. We generate stories, then seek evidence to support why they might represent reality. Some of these are scientific hypotheses, supported or not by scientific rules of evidence. These have difficulty being accepted if they are not congruent with prevailing social beliefs. Disbelievers invent counter stories with their own supporting evidence, real or imagined. Schulz winds up this section wondering, like many others, whether reality actually exists, and if so, whether we can detect it.

Being Wrong covers too much to summarize in a short review. There are several stories of Don Quixote and others famous for being wrong. Ah, but they were happy with their illusions.

At the end, Schultz describes “depressive realism:” Depressed people see (or foresee) the harsher realities of our earthly existence. Dwelling on this without comic relief drives you nuts, so most of us don’t dwell on it long. Accepting futures like Compression might move us to do something, but if not, let deniers revel in their optimistic bliss while they can.