Derivative trading is astronomical. All the numbers below are in Trillions. The 2009 U.S. GDP was $14 Trillion (with a “T”); and for the entire world, it was $57 Trillion.

Sizes of Squares Represent Comparisons of Magnitude in 2008 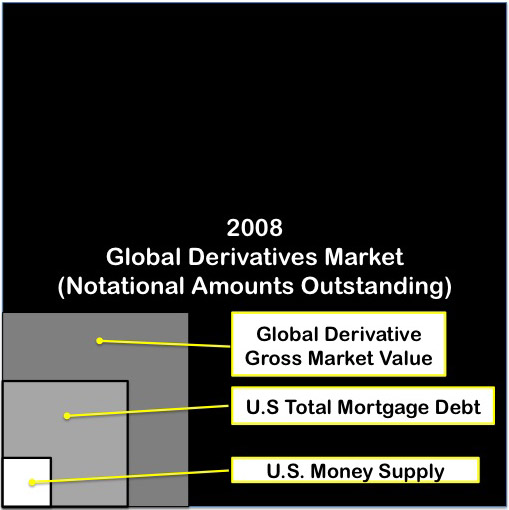 This over-sized market in the sky trades “derivatives,” split-offs from direct human valuations, like mortgages, thus ballooning the number of packages and sub-packages to trade. Also as each new derivative model abstracts further and further from any underlying base value from which it was derived, one must wonder at what point they branch too far from reality.

In addition, trading these things lets normal bubble psychology play on a much bigger gaming table. To traders placing mega-dollar bets, million dollar bonuses are trifling; billion dollar bailouts mere primer to get back in the game.

This game merely stalled. Infusions of money from the U.S. and other central banks keep it primed. Transactions are so intertwined that banks can’t easily unwind them and cash out; losses from just one deal can cascade into a bigger string of losses. Try to renegotiate a mortgage that has been split up into derivative poker chips, and you may be charged an “unwinding fee.”

Down on planet earth, despite market shrinkage and job losses, expansion is still going. Most durable goods previously made are still here, and more are piling up.

Bubble psychology also makes it hard for us to deal with Compression. For instance, it creates cost bubbles. Companies or governments commit to big outflows, assuming that growth will cover them. If growth slows or reverses, promises can’t be kept. Surprise!

General Motors was typical. Stakeholders collectively assumed obligations that seemed so certain that “lifestyles” depended on them. Allocating the hit created endless fairness arguments because no one wanted to lose. Bondholders wanted maximum payment. Suppliers needed shoring up. Employees wanted to send kids to college and pay for retirement. Final resolution was possible only in bankruptcy.

Shattered illusions demoralize. Repeated shattering weakens the “moral mystique” that legitimizes money, meaning that most people take money obligations seriously. The basic mechanics of money are simple, but unless they are cloaked in an arcane fog, no mystic aura, almost like a religion, confers this sense of social obligation.

Today we are no longer well served by deep neural impulses that might have served us well in a non-modern world. We have to recongize them and overcome them to overcome financial bubbles, much less the challenges of Compression. Behavioral research demonstrates how deep this lies within us. Human pseudo-logic often merely rationalizes impulses from the primitive parts of the brain. For example, Bradley Love’s experiments show that even with lots of information about long-term consequences, most people readily opt for short-term rewards. They influence fads in investing, fashion trends, political leanings. To explain things, an old tribal shaman usually confounded dreams with observation. Maybe we only think we are different. Evolutionary psychology suggests that optimistic illusions (the stuff of dreams) are necessary for us — so we keep fighting to the end to win, or to stay alive.

We even have social bubbles, or learning bubbles. For example, bioscientists’ enthusiasm appears to have run ahead of reality expecting great things to come from decoding the human genome.

Intellectually, we can grasp the challenges of Compression, but psychologically we can’t hold them in mind very long. Our instinct is to focus on immediate concerns, much smaller in scope. Our biggest challenge converting concepts to practice is spanning this gap. How can real working organizations with real people do it?