The Whole Economy is Full of It 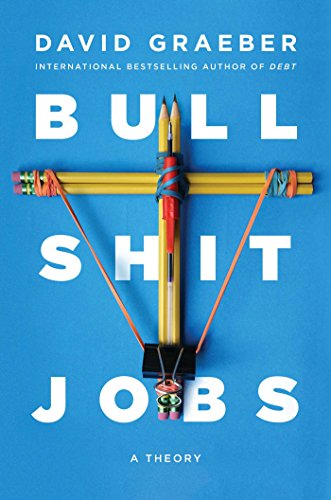 Although an American and by training an anthropologist, David Graeber is a professor at the London School of Economics. He’s not a stereotypical economist. He’s a rebel in the growing gang of “economists” at Evonomics, seeking a new economic system.

Readers familiar with lean operations recognize its definition of waste: any activity that a customer would not pay for. That’s a customer-centered definition. Bullshit Jobs expands that reference frame. Bullshit work defines waste as any work that does not benefit society, directly or indirectly.

Bullshit Jobs is in the same genre as a much earlier tongue-in-cheek treatise, Parkinson’s Law, by C. Northcote Parkinson. Sixty years later, Parkinson’s first law is still quoted, “Work expands to fill the time available in which to do it.” Occasionally heard is another of his ten laws, “The amount of time spent on any subject in a business meeting is in inverse proportion to the amount of money associated with that subject.”

Both Parkinson and Graeber knock bureaucratic administration, private as well as public. Graeber back-doored his way into this book. In 2013 he dashed off a political screed, “On the Phenomenon of Bullshit Jobs: A Work Rant.” It got a million hits; went viral – in multiple languages. Guerrilla posters quoting the article appeared in the London subway. Strangers flooded him with e-mail describing their bullshit jobs. Seeing an opportunity in this flood, Graeber decided to test whether evidence supported his rant.

Researching this subject was mostly qualitative assessment of his e-mail swamp, but Graeber managed to dredge up a few statistics. Fortunately, YouGov polled jobholders with questions taken directly from the article, and Graeber used the data. The key question was, “Does your job make a meaningful contribution to the world?” To Graeber’s amazement, 37% of all respondents believed that it did not – that their total job was bullshit, all of it. Of course, that assumes that if a person holding a job defines it as all bullshit, it really is. (50% thought their job was meaningful, 13% were unsure.)

From his e-mails and interviews of senders, Graeber fleshed out his definition of bullshit work. He concluded that at least 10% of almost anyone’s job doesn’t need doing – it’s bullshit — while about 37% of jobs are 100% bullshit. In addition, the YouGov survey estimated that about half the time in all American offices is spent on bullshit.

However, calling total bullshit waded deep into subjectivity. For example, almost everyone thinks that a registered nurse does not have a bullshit job. But RNs complain that 80% of their time is spent on paperwork, much of which is bullshit.

Graeber distinguishes a bullshit job from a shit job. Garbage collecting is a shit job, but vital. If garbage isn’t picked up, people notice immediately. However, if garbage system administrators don’t tick all their boxes, does anyone notice? Not immediately, anyway.

Graeber notes a managerial bias. Managers see waste when it interferes with socially necessary work that is obvious in purpose and whose accomplishment is visible, like workers leaning on a shovel instead of digging. But total bullshit thrives in the crevices of bureaucracies, interpreting arcane rules, collecting data, auditing, legal maneuvering, indecisive dithering, strategic planning, and polishing important reports that no one reads. A British academic, Graeber noted with dismay that UK universities have followed American ones padding up with well-paid administrators and PR flacks, while low-level teaching staff languish on poverty rock. Worse, these bullshitters preempt teaching time with useless meetings and reports.

Financial services are nests of bullshit jobs, with IT not far behind. Graeber received more missives from financial institution employees describing their job as total bullshit than from any other sector. A few thought that their bank’s core mission was bullshit; first create money; then trade it and manipulate it. If finance is supposed to spur efficiency, why in 1900, was finance roughly 4% of the economy, but by 2010, it was 9% (where did he get these numbers?). Did this happen because financial complexity proliferated into a morass that hides how useless it really is?

Business dogma insists that private enterprise cannot harbor waste like government bureaus. Astute managerial cost cutters would chop it. Bullshit says Graeber. He cites real estate employees whose job is to make rent payment so complex that renters miss payments. Then evict them and replace them with higher paying renters.

In many places Bullshit Jobs reminds me of my mother, a modestly paid bookkeeper for a local company in a small American city, circa 1930-1970. She belonged to a club of 16 women doing similar work. All did payroll and kept day-to-day operations running while their owner/managers played man-about-town in civic engagement. Everybody tacitly understood this arrangement. It was as if nothing had changed since the Greeks, whose elite citizens shunned mundane work because it interfered with their political and civic responsibilities (women weren’t Greek citizens). Other than payroll, my mother considered many other requests from her boss to be “government work” – bullshit.

Graeber claims that the rise of service work as a percentage of employment signifies an increase in bullshit jobs. Farmers and factory workers don’t have bullshit jobs, but many office workers do. A test: can you satisfactorily explain your work to a six year old?

Top-level rule making unwittingly proliferates bullshit work. Bureaucracy sets up turf wars, alpha contests for position, and fiddling with performance measurements to buff lack of substance into acceptability. Graeber notes that bullshit jobs may be the highest paid. Bullshit work is not limited to government bureaucracies. Denizens of corporate bureaucracy detect its stench – and it may be stronger.

Bullshit work wastes human lives. Many of Graeber’s respondents made peace with bullshit work by doing something to benefit humanity outside it. As one explained, “I write PR drivel for pay so I can fund worthwhile projects.”

But Graeber says that workers trapped in bullshit work with no outside counterbalance experience “spiritual violence.” Everybody needs a reason for being, a moral justification to compensate for feeling totally useless at work, or they sink into psychic depression.

Graeber severely condemns people who monetize and financialize “caring sector” work – the kind that requires empathy – teaching, caring for the sick, helping people with basic needs – or just listening when people need to talk. When caring people are stifled by bureaucratic bullshit, society is disintegrating. To relieve this, Graeber proposes a guaranteed basic income – maybe, sort of. He’s iffy about it.

Graeber nicely describes a murky subject, but offers few solutions. Most public policy solutions are top-down, which usually piles  bureaucratic bullshit. He advocates social change. Confer on people doing real work, often toward the bottom of the pay scale, the power to manage their own work. Pay them a living wage. Give them free time instead of make-work. Most people will use it to do something socially useful.

Graeber recognizes our big environmental issues, but does not dig into their implications. However, he does us a service by illustrating how a big chunk of what we call an economy does very little that is essential to us, much less to nature. Most bullshit work merely manipulates images and symbols – an artificial economy, whose system often serves only its own perpetuation. Perhaps if we concentrated more on nature and less on symbols, administrative rules, diversionary entertainment, technological baubles, and keeping up appearances, we would see through the artificiality.

Do Bullshit Jobs prop up a system that is inherently wasteful without us noticing it? The waste is not easily seen when viewed from within the system. Something is wrong when large numbers of jobholders see no social value in what they do. We assume that fuzzily defined work must have a purpose somewhere. We have to question purposes more critically, distinguishing between what we really need and what we merely want. We need a more effective system for resolving messy systemic issues. And these issues are emotional. We’re apt to understand intellectually, but balk at letting go of our own sentimental artifacts, status symbols, and power rituals.