Ages of Discord: A Structural-Demographic Analysis of American History, by Peter Turchin 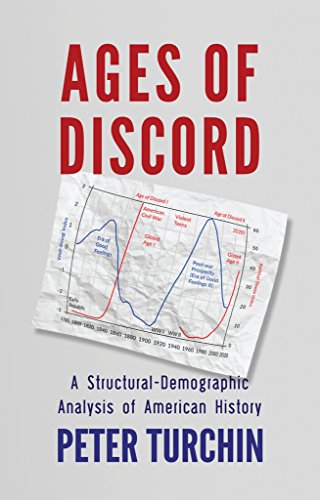 Peter Turchin is Professor of Evolutionary Biology at the University of Connecticut, and a founder of “Cliodynamics,” mathematical modeling of long-term social processes. You could call it mathematical anthropology. He analyzes social changes going back millennia to compare them with social trends he tracks today. That’s how Ages of Discord came about. It compares ancient social cycles with those in U.S. history up to the present.

Turchin compares social cycles in antiquity with those in American history. Historians love to classify events in cycles. Turchin applies quantitative analysis to historians’ subjective cycles. The early part of Ages of Discord trudges through the methodology to do this, slowly building to his punch line for journalists’ consumption: the United States is on track to experience “significant social disruption” in the 2020s.

Turchin bases this projection on his structural-demographic theory by which he analyzes social cycles in civilizations dating to antiquity. He calls them secular cycles. He devises comparative indexes covering four areas:

Population and Demographics, including an index of Social Optimism

Environmental analysts consider climate significant in the rise and fall of ancient empires, but Turchin ignores climate, perhaps because the effect shows up in his social stress indexes. However, Turchin analyzes social factors that environmentalists ignore.

Turchin compiles surrogate indicator data into his indexes, necessary in order to compare cycles across civilizations 2500 years apart. He calls this “building a spectrum of models, each addressing a different aspect of a complex phenomenon.” To compare data across centuries, he uses stochastic models instead of independent agent models favored by other complexity researchers. All his stress indexes are weighted in formulas by which he classifies secular cycles as integrative or disintegrative.

As much as data will allow, stress was high during the American Revolution; then started to drop, reaching a low in the 1820s, historians’ Era of Good Feelings. Stress indicators then rose all through the 19th century, peaking in the 1890s. Of course, the instability sub-index peaked during the Civil War, but overall stress kept climbing during Reconstruction, peaking around 1900. Why? Social disruption was enormous. Besides Reconstruction remaking the South, Western Migration, railroads and other new technology ripped up old patterns of life. Monetary instability caused panics. Strikes became violent. And elites feared anarchy. (An anarchist assassinated President McKinley.)

Curiously, this stress kept dropping in the 20th century, through the Depression and WWII. It began rising again with the Civil Rights and Viet Nam rumbles of the 1960s, and has steadily moved upward since. It’s not back to the 1890s peak, but if the trend continues, it might get there. The instability sub-index, high in the 1960s, has since dropped a tad, wobbling well above the placid 1950s, but not yet at the Civil War level.

What about the Depression? Why wasn’t it more stressful? Turchin opines that it was because people pulled together; helped each other out. They did not make it an age of discord. The New Deal cushioned the misery, and in spite of it all, life improved (electrification, etc.), wages kept rising, and income distribution flattened considerably.

Lawyers provide some of Turchin’s interesting stress measurements. The number of lawyers per capita grew about 2.5 times during the past 40 years. Between 2000 and 2014, the beginning salaries of new law graduates sharply split. In 2000, salaries formed a bell curve, but by 2014, most new grads got about $40,000 per year and a pile of debt, while top grads (budding elites?) clustered around $125,000 per year. Another indicator is percentage of federal judicial nominations confirmed (going down). Courts are overloaded; prisons are packed; Americans are notoriously contentious working out their differences.

Turchin also looks at the increasing cost of electing a U.S. Representative, doubling since 1990. Social distrust has waxed and waned since the resignation of President Nixon, but each new peak is higher. Distrust in social institutions particularly worries him. Since 1980, his political stress index has risen rapidly and is still climbing. In other civilizations this has been a precursor to violence.

However, disaster is not foreordained. We may be in an age where more people can see the structural forces propelling us into disintegration. If we know that we are skating to the brink, perhaps we can take measures to keep from going over the edge. But Turchin stops without proposing policies or measures that might be taken, and by whom.

We can sense that a huge change is coming without Turchin’s indexes, but he leaves us with a question: Can radical transformation be peaceful?