A History of the World in Seven Cheap Things: A Guide to Capitalism, Nature, and the Future of the Planet by Raj Patel and Jason Moore 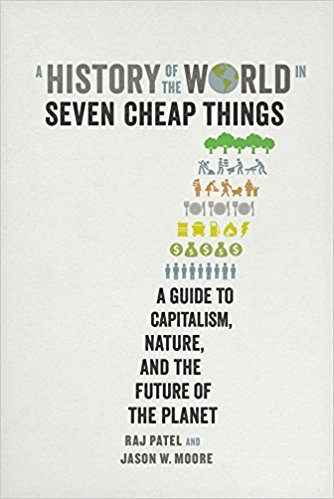 A three-minute video blaring the theme of this book is the first video scrolling down Raj Patel’s home page. On the faculty of the University of Texas, Patel’s passion is food security. Jason Moore is a researcher at Binghamton. Both are young rebels against the status quo and prolific authors.

This book is not the authors’ first dance, and with Patel you get a view of “the system” from a bottom-up, third world perspective. That view paints the history of how the capitalist system formed in different colors. Patel and Moore are not economists, so they see through the numbers, relating what they see to recurring environmental crises.

From start to finish, the authors posit that the deep cause of our global crisis is seeing human systems as something apart from natural systems. Why? They have always been inseparable and still are. The fallacy that they are two different entities is propped up by Des Carte’s mind-matter dualism, which lets us classify nature, including other people, as things to be exploited and traded. Once down this path, we believe that Thinkers (minds) should control the world; non-thinkers (nature and subordinate people) are things to be controlled for the thinker’s benefit. This explains why minority and indigenous people connect environmental problems with social injustice.

The evolution of dualistic thinking began before Des Carte – and Columbus, not seen as a hero. Upon landing in the New World, his constant thought was how to monetize anything he saw, including the natives. He expected to find riches, so he sought them in everything he surveyed. The voyages cost money. They had to be justified.

What the authors call “cheap,” an attribute, business writers would more likely call “commoditization,” a process, but let’s go on. The system that promotes this continuous cheapening is not just business. It’s our total culture, a meld of technology, legalities, religion, myths, beliefs, military force, and money. That mix brews a colonial mentality.

In simplest form, a colonial mentality opens frontiers, often done by force. Wars cost money, so exploiting new frontiers has to pay for them. For five centuries, that’s been the game, but now new frontiers are less rewarding. The system faltering. Social chaos is deepening as we grope for a new system – a new “stable basin” as chaos theorists put it. Is one possible by consciously migrating toward it, can one just emerge, or will we have total environmental collapse – and with it, economic collapse?

This theme rolls through the details of “cheapening” seven factors necessary for capitalism to work: Nature, Money, Work, Care, Food, Energy, and Lives. All of them would fundamentally change were we to merge human systems with natural systems.

A review can only give a whiff of a fascinating read. If we pay people to work, it is not supposed to be fun, and often it’s painful drudgery. However, if no money Is involved, people may make it into a celebration, as is often done with volunteer work. Apply pressure to increase productivity, and work is apt to be even less enjoyable. The authors do not understand Toyota and other companies’ adventures engaging the employees in process improvement. Engaging employees is high priority for many managers today, as they try to bridge the owner-employee gap, but the authors have a bigger picture in mind.

Under capitalism, time is money, as if every minute has a money multiplier. All time is measured, marketed, and used to make money. Time measurement is well known in the providing of goods and services. Could we get so goofy as to penalize consumers who consume at too slow a pace? When merely passing time, enjoying life and observing what’s around us is considered a waste, we feel guilty about being unproductive.

A huge, perhaps fatal blind spot of capitalist society is that much of its support is off-the-books, uncounted. That’s work at home, motherhood, parenting, sick care, and other functions necessary for quality of life. When the system pays people for this support, it tends to underpay them. That’s systemically biased cheap work. A more deadly flaw is regarding nature as free for the taking. Attempts to assign values to these support systems tangle in knots because their very existence doesn’t fit the mindset.

The Christian religion supported colonial expansion and economic growth. Natives know that Christianity encouraged slavery. Ignorant savages had to be told of Christ. Work was their route to salvation, and this theology was abetted by late Renaissance philosophy. John Locke, the philosophical godfather of the U.S. Constitution, delivered the opinion that Coosa Indians captured during a revolt had no rights to property, while the right to property was a bulwark his philosophy. Of the property rights of slaves from Africa, or the right to consider them as property, he was silent. (Patel surmises that Locke wrote this opinion for a hearing that was influenced by a moneyed benefactor.)

Outright slavery still exists, but the huge rise in agricultural productivity is making a bigger crisis. It’s driving farmers all over the world off the land and into cities. There they must be fed. For food they need cash. But to keep urban goods cheap, city wages must be cheap, and urban poor that cannot buy food revolt immediately. This system depends on cheap food, so food workers must be minimally paid, and on it goes.

These cycles of cheapening have to end somewhere, sometime, when nature and other reservoirs of cheapness (off-the-books or externalized cost) deplete.  Any government in history that didn’t provide food to urban rabble was in trouble. The basic problem is that too much of the social work on which civilization rests either can’t be valued in cash, or if it is, greatly undervalued. Society and nature as entwined webs of life work as a combined system. They have to. However, market valuations using cash cannot make all parts of a system work together. Market competition is not social collaboration. Market comparisons imply that some parts of a system are more valuable than others. That’s nonsense if the whole system has to work as an intact web.

Patel and Moore have the same problem as everyone else devising a prescription for all this. They propose generalities. Specific actions aren’t covered, perhaps because they depend on a location. Their “post-capitalist vision of governing and reckoning” is in five phases.

Recognition: That our relationships with nature and each other are deeply embedded in culture. Paternalistic, colonial mindsets will not uproot easily – and union of humanity with nature might be resisted with violence.

Reparation: Spending money cannot restore nature to health. It’s not an insurance pay out. Nature cannot directly use compensation in money. You can’t buy her off and make her go away. We have to change how we think and what we do. That’s the real reparation (which most environmentalists would probably call “regeneration.”)

Redistribution: Disconnect the provision of homes, energy, and food from the capitalist system, or at least from the global capitalist system. Create places and ways for everyone to reconnect with the web of life. The authors rightly expect capitalists to forcibly resist these proposals, but offer little strategy for how to proceed.

Re-imagination: Rethink how work is done in homes, shops, offices, and classrooms. Make work meaningful, if not fun. How do you interest children in doing mundane work? Turn it into fun. How do you maintain the interest of volunteer workers? Respect them, recognize them, and have fun once in a while.

Re-Creation: Re-discover the joy of idleness as well as of good work. Learn to enjoy nature and life where you are. Reconnect.

Seven Cheap Things proclaims that for both humans and the ecology to survive, we must create very different systems for work and life. It spots the fatal flaws of capitalism, beliefs and customs in need of transformation. It does not wade into the weeds – no mention of recycling, circular economies, or energy budgeting. The authors appear to assume that if people learn to see themselves as indivisible from nature, they will readily learn the how-to.

The authors want us to reconceive our relationship between nature and human systems, but say little about how to erase and replace beliefs so deep that few of us know how they originated. I can empathize. You can only do so much with one book. However, this shortfall does give pause for what Vigorous Learning should encompass. Perhaps it should start by individuals practicing a new world view.

In the meantime, self-help neighborhoods, garden programs, and co-ops here and there seem to be taking off. People fed up with cash-strapped penury seek a “new economy,” whatever it might be, by taking their welfare into their own hands. They are not waiting on government policy, and few would be aware of the history in Seven Cheap Things. They’re great, but only a start toward a much different mode of living, and toward much different basic ideas on what constitutes quality of life. Whether these movements can muster the energy to deepen their changes and spread their programs to other localities only the future can tell.