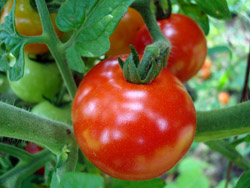 In February, the UN’s Global FAO Food Price Index pushed further above its former peak in July 2008, the same month that oil prices peaked above $140 a barrel. The 2008 peak subsided quickly because it was partly speculative trading, but not before food riots broke out in various places; Egypt for one. The 2011 rise promises to hang around longer. Its cause is basic supply shortages as noted in earlier updates. Bad weather pinched recent harvests in Russia, Ukraine, Australia, and Argentina, collectively drawing down world grain stocks. High rice yields partly filled the gap, so no one knowledgeable is panicking yet, but they will in 2012 if poor harvests continue.

Warnings of world food shortages are old news. Malthus has been kept at bay for a long time, but 2-3 straight years of increasing global demand, but production shortfall, would bring calls to expand industrial agriculture to offset disasters. Market forecasters debate whether the glass is half full or half empty. From a Compression view, that’s the wrong question. A better question is whether the glass is twice as big as it needs to be.

Proposals to ameliorate food shortages, summarized anew in a recent UN report, have long awaited a serious pinch to receive serious attention. They resemble Compression Thinking, because they take a total system view, make use of high-tech if it is not energy and materials intensive, and attempt to learn how to become ever more ingenious using locally available resources in perpetuity.

The most obvious method to extend the food supply is for humans to eat more grain (and other crops) directly instead of using the land to feed animals; then eating the meat. Animals eat around five pounds of grain for each pound of meat. Globally, only half of all grain is eaten by humans. (In 2007 about 48%, with 35% fed to animals, and 17% grown for fuel, mainly ethanol, according to Worldwatch.) Eating less meat and burning less ethanol would open more existing crop ground to grow food. But as consumers, we consider meat to be a higher-class diet, despite health warnings about consuming it to excess, and the livestock industry doesn’t want to shrink.

Second, much can be done to reduce food waste. Estimates vary wildly, and by geographic location, but globally roughly half of all food grown is not eaten. In developing countries, 20-40% of crops are lost to pests and pathogens in the field, and up to half of the rest may be lost post-harvest from poor storage and transport. Something like cheap solar powered refrigerators (other ideas might be better) would help a great deal. Losses are also high in places like the United States (25% or more), due to shrinkage from field to market, and to serving super-sized portions.

Third, and most important, is taking better care of cropland and other resources – total resource productivity, not just immediate labor productivity, and with less reliance on fossil fuel based fertilizers. This goes by different names. “Agroecology” is one. It may involve minimally energy-intensive “high-tech,” like laser-leveling fields to make maximum use of irrigation water, but mostly it seeks to learn from experience as well as from all credible sources to make the best long-term use of local resources in perpetuity.

All this, plus growing more food closer to the point of consumption would multiply the overall effects of having quality food using fewer resources. That is, combine scientific learning and observation to learn from experience how to make better use of what is available. To move beyond learning from local lore, which may be wisdom or may be obsolete mythology, a scientific approach might even do multi-year life cycle (crop cycle) analyses using mass-energy balance – usually done only by ecologists. That suggests the creation of vigorous learning organizations for Compression Thinking. The UN actually proposes 21st century versions of the old county agent systems in the United States.