Dance to the Tune of Life: Biological Relativity, by Denis Noble 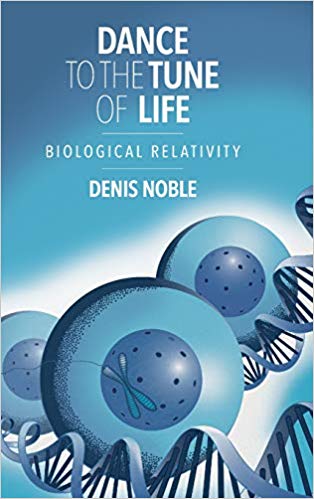 How we explain to ourselves the answers to two big questions underpins the myriad assumptions that guide how we behave:

Answers to these questions are far from our only influencers, but they are big ones. Explaining the big questions drills into both Western religions and Western science, and to the historical conflicts between them. Ever since Darwin, the biggest rift has been between theories of evolution and creationism, or purposeful design. This conflict is bitter because it messes with our beliefs about our proper role in the world, long the domain of religion. Evolution undercuts church authority, first to define what we are; then to proclaim how we should live. It undercuts political autocracy too.

Rigid creationists interpret evolution as an opposing religion – a dogma. Wading into this fray, Denis Noble and his colleagues contend that that creationists and intelligent designers have a valid point when evolution is explained by Neo-Darwinism, which is that biological evolution is a random re-sorting of genes, with the environment testing whether a combination deserves to live or die – survival of the fittest.

This view is deterministic because it presumes that your life is controlled by your genes interacting with your environment. Therefore, if you identify a controlling gene, you can add or delete genetic instructions guiding your health and life. This is only partly true. It’s misleading because it’s incomplete, and Denis Noble and friends are calling bullshit on it.

They are promoting a Third Way, a different explanation supported by accumulated biological evidence. They have set up a web site, The Third Way. Dance to the Tune of Life is only one of many books listed on it, but it’s a good overview. An integrative review of biological research leads to a deep dive into the philosophy that supports the Third Way. This, Noble calls “biological relativity.”

Who’s Denis Noble? He’s an octogenarian British biological researcher with six decades of notable accomplishment. He began as a reductionist Neo-Darwinist modeler, developing the first useful mathematical model of the oscillations that compose a beating heart in 1960. For that, and for subsequent projects, he won acclaim. Today he could kick back in retirement, but he hasn’t. Along the way, Noble observed that more and more evidence of how biology works does not accord with Neo-Darwinism, so he became a point person defining The Third Way, or biological relativity.

Why is Biological Relativity Important?

The antecedents of relativity are ancient. They are in Greek philosophy, Buddhist teachings, and in the insights of Lamarck and Waddington, both significant, but largely dismissed and forgotten biological researchers. Deep thinkers, if not everyone, had their noses rubbed in relativity in physics most notably by Einstein’s Theory of Relativity in 1905. Afterward, relativity in physics became so difficult to deny that it became the prevailing paradigm, culminating a long transformation of scientific thought on several big questions: mankind’s place in the universe, the nature of time, and concepts of causality.

We had to overcome a succession of deceptions arising from how we perceive the universe. It went in several steps, all of them contentious. Way back, many people thought the earth was flat and the sky was a celestial sphere over it (although careful observers knew better). Galileo rattled that belief by defending to church scholars the idea that a round earth circled the sun, the “real” center of the universe, and this did not contradict Holy Scripture – the reference medium of theology. Then increased telescopic power revealed that the sun was only one star among zillions, not the center of anything. Physicists then hung their hopes for a fixed reference framework on ether, a mysterious fluid they assumed to fill all space. When no evidence could be found for this idea, the final argument that all physics could be tied to fixed references finally faded into nothingness. All is relative, time, space, matter, energy – all connected, and all interdependent, everything interacting on the celestial stage of spacetime.

Showing that the sun deflected rays of light was (almost) final proof of physical relativity, but none of this was obvious to the man on the street. It was all strange, abstract, and far away.  About the same time, experiments showed that light could be measured as either waves or particles; then that the state of an electron was not independent of its observation. A “particle” was not independent of an observer. Finally, this led to quantum entanglement, spooky action at a distance when particles simultaneously change states faster than can be communicated by the speed of light. But all this too is outside the daily experience of the man on the street, fussing with blown fuses and sticky doors – all easily modeled by Newtonian physics.

Relativity in physics is only obvious at the cosmological scale or at a nano-scale, way above or way below the scale at which most of us daily perceive things. Words to describe them don’t draw on much daily experience either, so it’s hard to relate to relativity. However, one way to start explaining spacetime to people who have never studied physics is to invert their interpretation of their perceptions using Yogi Berra type definitions. Space is that which keeps everything from being in one place, and time is that which keeps it all from happening at once.

By contrast, acceptance of relativity in biology has to grab us where we live, at our scale of perception. Noble spends many words on the vastness of scale, one indicator of relativity, noting that from the view of an electron, a biological cell appears as relatively immense as the cosmos do to us. He positions human perceptual scale in the middle of this humongous stretch of relative dimensional size:

Biology consists of complex systems, as complex as anything else in the universe because of the number of elements: trillions of cells in a body, trillions of atoms in each cell, more atoms in a body than estimates of stars in the universe. The number of potential interactions is mind boggling. “Gazillions” of interactions and feedbacks are taking place right now to keep your body viable.

Biological relativity recognizes that biology consists of interconnecting systems of systems. The microbiomes embedded in all higher-level organisms, including humans, are part of this evidence. There is no central point of reference, no simple cause and effect explanation, no hope of ever understanding it all. Just as in relativity physics, neither a measurement nor its interpretation is independent of the observer and of the scale at which it Is taken. But there is more to biological relativity than this. We need to distance our thinking from presumptions for which there is insufficient evidence, recognizing that we cannot somehow control it all. Evidence remains the touchstone of science. (Noble occasionally references another well-known systems book, A Systems View of Life, by Capra and Luisi.)

Dance to the Tune of Life is not long, but it requires reflective reading. It’s repetitious in spots while Noble buttresses each of these points with supporting evidence:

Noble elaborates on higher level organisms having a purpose to refute counterarguments by Neo-Darwinist biologists, of whom there remain many. A key point is that genes do not determine what an organism does unless they are activated. Genes are nodes in various control systems of the body, called on to suggest a change in process. Noble likens genes to a musical score; marvelous when activated in sound, but otherwise inert, like a musical score in a library. Epigenetic gene transfer by various routes let an organism vary its genes while it yet lives; then pass those modifications on by procreation. Noble’s book is also an insider account of the wrangling in a scientific field in the throes of changing a major paradigm.

Noble contends that pioneering scientific questions guide us toward evidence for that which we do not know, or from a perspective we have not had. They do not seek to confirm what we already think we know – although confirmation is important to science. And theories should be falsifiable from future evidence. Otherwise it’s not science; it’s a conceptual belief system.

Noble avers that higher level organisms, like mankind, suborn their lower level internal systems to their willful purpose. Biologically that’s obvious; our legs will take us toward any destination we want them to reach. From this, it is easy to extrapolate that we all should regard ourselves as inseparable from nature, but Noble has practically nothing to say about the great question of our time: How can mankind, working together, pull back from the brink of ecological disaster?