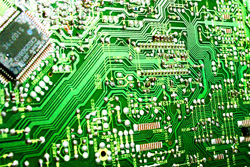 A Yogi Berra definition of complexity: “If I understand it, it’s simple; if not, it’s complicated.” So how do we make things seem simple? Increasing complexity seems inevitable, so can we distinguish between useful complexity and wasteful complexity?

Computers exemplify this. In 1946 the ENIAC computer weighed 30 tons, took up 1800 square feet, and consumed 160 kilowatts of electricity. A modern integrated circuit might draw 70 milliwatts (not megawatts), but computation speeds surpass ENIAC by many orders of magnitude. Unfortunately, demand for computation is also growing so fast that waste heat from billions of phones, computers, and servers is a problem.  Can we complicate computers even better?

Or take the automobile. The original 1908 Model T had 812 part numbers (not the total number of parts). A modern car is too complex to pin down an equivalent number. Toyota says one has about 30,000 parts (not part numbers). Lists of parts at assembly include many sub-assemblies. Not all parts go in every car. In addition, each car has about 10 million lines of code in 20-40 different controllers complicating the thing, but code doesn’t count as a part.

No lone individual can comprehend such complex devices. They are designed and built by processes. People interact with the processes and with each other. Relatively simple processes can produce complex outcomes. You don’t have to understand all about a car to drive it. Likewise, people don’t have to fully understand a web of processes to contribute to designing, building, or servicing a car. However, at a minimum they need a working understanding of the processes in which they participate.

Rote assembly workers have to know that much, but when work processes become complex, with new twists popping up constantly, it is inadequate. Then participants have to understand the why of their work in depth — to know when something is wrong, or likely to go wrong in the future. They have to become learners on the job. They have to understand the mission of the organization, the goals of a process, how to improve a process, and how to consider a wide scope of issues assessing that process. In today’s language, an organization needs a lot of fast learning “mini CEOs” in a lot of positions. A few brains controlling processes are insufficient.

Too much of our complexity is man-made “imaginary complexity.” It exists only because we have not learned enough to simplify something that could be made simpler. This is waste from slow learning.

In the design world, imaginary complexity is an inefficient design that we have not learned enough to refine. In work organizations, it’s inefficient bureaucratic procedures, work arounds that hopelessly attempt to prompt us to think about considerations that we might overlook. But these are cumbersome. Surely there are better ways to prompt learning faster, without so many re-dos, delays, and rejections.

Take the car example again. In inefficient design processes, engineers waste time verifying specs, updating bills of materials, waiting for simulation results, and on and on. They may spend 90% of their time wrestling their own systems instead of asking what-if questions, looking at design alternatives, or thinking about end-of-life re-use processes.

Complicate things with the need for life cycle physical processes, and reasons for better learning organizations multiply. Design for instance, is not just to create functional artifacts, but to anticipate lifetime processes by many work organizations and by the product users. These processes may need to be flexible to allow for future upgrades and changing requirements. Vigorous learning enterprises are needed to keep up with this. We are leaving behind a world in which it was good enough to design, build, sell, and collect the money.