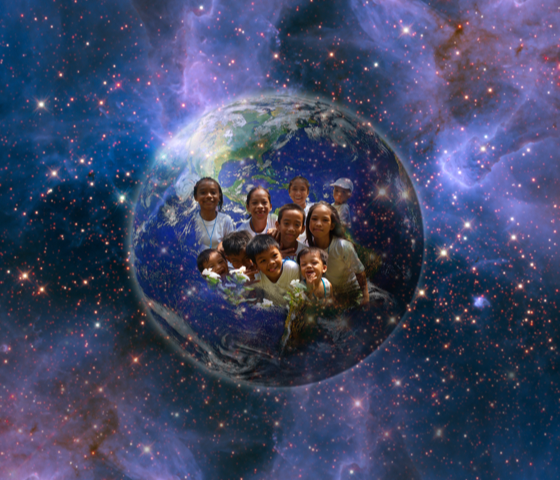 A graphic depiction of Gaia from Pixabay, showing that we are connected to each other, to our ecology, and to everything else. That everything in the entire universe, not just earth bound systems, all somehow link together.

Can We Understand Complexity or Only Sense It?

Complex situations affecting humans baffle us and often stir conflict. Covid-19 is such a situation. Everybody has a different angle on a contagion disrupting all our lives. We cannot be dispassionate about it, but we need to think clearly anyway.

Jack Ward has a succinct definition of complex systems: interconnected systems of interacting change – events and ideas unrolling through time. Nothing stays the same, but we can only project a future that resembles patterns of the past, or succumb to nostalgia and try to recapture a past pattern – as we foggily remember it. When this approach is overwhelmed by uncertainty, by flocks of “black swans” descending, by old systems proving incapable of new challenges, we need a better way to think about complex systems in rapid change. And we need to remain aware that we are but one factor in a world of interconnected systems.

We can never know in complete detail how complex systems work. We have to learn more and more, and from different perspectives, but even then we can only be aware that some of its workings are a black box to us. Don’t know what’s inside. When we learn more about the workings inside a black box, we then discover that more black boxes reside inside it.

Without knowing all this, ecologists have long warned that cutting old growth forests robs earth of a diversity of micro-life that we can’t see for all the trees. Although we don’t know all the ways that this micro-life affects humans, we sense a strong connection. You can call this intuition “deep ecology” or something else. The black box phenomenon describes our conscious learning about systems mysteries that we cannot explicitly describe, but we have to act from a state of ignorance when we can’t see or understand detailed interactive loops.

The moral: don’t cut old growth forest. Then you don’t have to ingeniously restore it. Beyond that, well-known is that a fragmented, niche-filled ecology has homes for a lot more life, and more varieties of life – greater biodiversity. The direction of life appears to be creating conditions for more life, greater variety, and greater complexity.

Gaia as the Vastness of Interconnected Systems

Let’s deepen our dive into complexity with centenarian James Lovelock, considered to be the father of the Gaia Hypothesis, that all ecology and all the cosmos are one big interconnected system of systems. Humanity is one piddling, but rather self-important part of Gaia. Lovelock’s Novacene is a wild, way-out-there book that partly sums up his prior thinking, but mostly jumps into the wild blue by speculating knowledgeably on the future, including artificial intelligence.

A corollary of the Gaia hypothesis is that life seeks to multiply life, and in so doing it is able to seek its own energy, reproduce itself, and self-correct its errors of reproduction. To do this life promotes increasing complexity, including influencing earth’s climate and weather to advance the existence of life. Topping this, Lovelock surmises that a non-carbon form of life could emerge from human technology that would seek to perpetuate conditions on earth (and maybe other planets) to assure its own continued existence, and perhaps ours. (How non-carbon life might find and absorb energy on its own, like carbon-based plant life, is a weak point of Lovelock’s conjectures. Partly because AI software eats so much energy, and also because of doubt that AI can ever be trained to be totally self-aware — have a “soul” of its own — today’s AI experts question whether AI can ever deploy in the sense that Lovelock projects.)

That’s a complex mouthful. Lovelock starts his premises on non-carbon-based life with the many current hypotheses on how what we think is reality is more like a simulation, that the entire universe is based on information processes that link everything together. But nothing else communicates in human language. Human languages trap us in “linear” thinking. We tell stories that have a beginning and an end. Logic flows nicely from observations and premises to conclusions consistent with this input. Non-human life may not be bound by this limit. Not if it communicates with processes akin to parallel-processing quantum computing.

Humans may actually do this too, when we are suddenly inspired by a concept from “out of the blue,” something off-track, unrelated to prior perspectives. Lovelock credits his innovations (several besides the Gaia hypothesis were notable) to intuitive thinking: an idea just came together. Later, he could not logically reconstruct how.

But what about artificial intelligence? It won’t really advance until we cut it loose from human control, beyond being cyborgs in service to human masters, like aircraft autopilots today. When faced with a situation for which they are not programmed, autopilots suddenly revert control to a human pilot – sometimes with disastrous results. Lovelock suggests letting AI pilots in drones learn from near crashes or even real ones, so that they become better than human pilots in situations where an AI cyborg can react to sensors faster than a human.

This presumes that AI cyborgs will not intentionally harm humans, the big danger if AI cyborgs are trained to use weaponry to automatically kill humans. (This is the same reasoning by which Elon Musk fears AI going out of control.)

Instead train AI cyborgs to protect and perpetuate the environment necessary for them to exist, become a part of Gaia. Humans are sub-systems of Gaia, but can’t seem to realize it, so we don’t have that much sense. With or without AI cyborgs, can humans develop that level of sense?