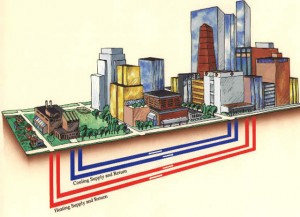 One of the oldest ways to save energy is district energy, formerly district heating. Many old cities, campuses, and other big building complexes used district heating, often as steam piped from an on-site boiler house or as turbine steam from a community electrical generating plant. In an energy-cheap economy, this came to be replaced by gas lines and high-voltage transmission grids.

It’s a media backwater, but district energy is being revitalized. Modern technology can make it much more versatile than “steam radiators.” The International District Energy Association (IDEA) has several overview videos.

The poster child for district energy is Denmark, which is energy-independent. Their best projects claim that up to 80% of energy in fuel is converted to a useful purpose, contrasted with 40% energy captured by the best electrical generating plants, a huge energy saving wherever it is feasible. Modern district energy captures as much heat as possible using current heat conversion technology, and better technology keeps coming along.

Naturally, physics limits how far one can pipe thermal heat without excess losses, so district energy works best in big cities with high building density. However, district energy has proven out in Skive, Denmark, a town of 48,000 that is downright chilly in winter, and it works in small areas like college campuses.

Denmark’s population density is 334 per sq. mile; the United States is only 84 per sq. mile, but its population density varies between Manhattan and the Rockies. Americans sprawled when energy was cheap. Few people want to move to a city, but if fuel costs rise no more than 2-3 times, some may be forced to. The Center for Neighborhood Technology in Chicago has very interesting graphs and data on this.

However, the United States now has too few district energy choices to move into. Of course, creating district energy from scratch is a hefty investment, but the returns from saving energy beat those from grabbing more from harder-to-get sources, so district energy will probably start getting serious attention soon.

District energy is only one factor reducing total energy usage. Modifying buildings to improve energy efficiency adds to the potential. Amory Lovins has an interesting overview of that (and much else) in Reinventing Fire.