Doughnut Economics: Seven Ways to Think Like a 21st-Century Economist by Kate Raworth 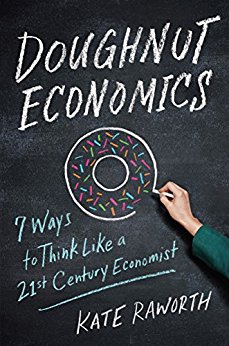 If you follow economic news and have not heard of Kate Raworth, chances are you will. Doughnut Economics is more than a book; it’s a budding one-woman movement. Kate is a British writer with articles in UK newspapers, interviews on BBC (and NPR), a frequent conference speaker, and the reputation of being “one of the top ten Tweeters on economic transformation.”

Raworth also has a web page linked to animations, videos, and a blog. And if you have 16 minutes, you can see her TED Talk, a short version of her ideas.

Raworth studied economics at Oxford in the 1980s and was disappointed by the narrowness of the discipline – elaborate model building based on assumptions that left big chunks of the real world out of the models. She worked with micro-entrepreneurs in Zanzibar; she worked for ten years with Oxfam; she became a mother; and along the way she began to conceptualize an economy the real world needed as a doughnut model. Here is the reviewer’s simplified representation: 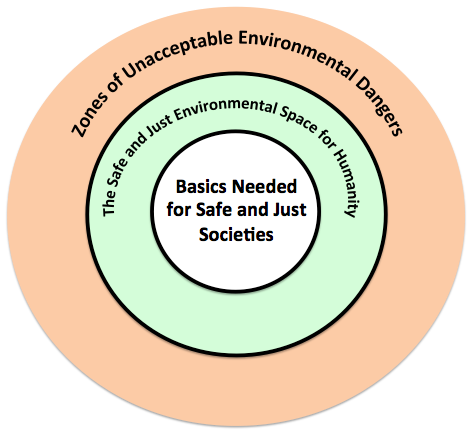 This diagram can be complicated a great deal, and Raworth does that. There are many other concepts for a future environmentally compatible economy, but the beauty of this one is that most people seem to grasp the idea from a doughnut diagram. You need no background in economics or ecology to get the basic concept.

Kate excoriates neoliberal economics. Economists are not only blind to the limitations of the assumptions they have made, the media have presented them to us so incessantly for so long, that most of us are imbued with them. And these assumptions have infected the language of public policy, and political discourse too. Now they are buried in our subjective, collective consciousness, difficult to dislodge. The top four fallacious presumptions:

And here are some more:

And here are Raworth’s 7 ways to change thinking to work out of the mess we’re in:

As an inspiration to take on new direction, Raworth gets a high score in this review; her comparisons of basic values of the present system versus a needed future system are sharply contrasted. However, she does not add much to the divisions among other “new economists” on what this future will look like and what the system must do.

For example, some think that merely dissociating the dependence of GNP on materials and energy would be sufficient progress. Others insist that only a great reduction in human population will decrease materials consumption to a level that the environment can support. Still more propose that we must have “de-growth,” or Compression, a big shrinkage in consumption and GNP. (But if GNP is a terribly misleading measurement, why propose action based on it?)

Raworth and others promote switching to broader measurements of economic performance, like Gross National Happiness, circular economies, and local ones. She never opines how severe this change must be, or how to transition into it – but neither do many others. One book can’t cover it all. Most readers with an interest in economics and the environment will enjoy a romp through a very readable book on subjects that are usually presented in much more esoteric language.