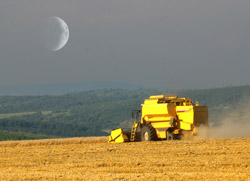 Soil, teeming with microbes and mystery, like sex, still works about as it did millennia ago. When managing soil, technology gives us more options, but not wisdom. If we use it only to prop up soil until it wears out, we’re foolish. Depleted industrial farm soil must be revitalized to grow a garden; whereas soil well managed for years sprouts more produce than can be given away. (I had that experience on farm ground converted to suburb.)

Before the technology of industrial agriculture, farmers concerned for the future knew that unless they managed the condition of the soil, yields would drop. This regularly involved unpleasantness, like redistributing manure. And arable soil is a tiny slice of the entire biosphere. Neglecting the condition of the rest of it isn’t wise either.

Food for both humans and livestock comes from topsoil. Soil is also a carbon sink; needs carbon to transform into edible carbon. Exchanges of gases between cultivated soil and the atmosphere don’t have much effect on atmospheric composition, except for nitrous oxide from excess application of nitrogen fertilizers, but soil composition is important for soil fertility. However, we’ve been losing more and more arable topsoil ever since mechanical plowing exposed more and more land to wind and water erosion.

Why? In sum, it’s eagerness to maximize yield and labor productivity year over year – incentives for industrial farming. Some of the oldest tilled ground on earth is in terraces with soil tended for thousands of years, and still productive. If we regard topsoil as an expendable commodity, we expend a capital asset necessary for life. The wisest of the ancients figured that out. The foolish ones wore out the ground and fled the scene.

Basic care of soil is old-tech, low-tech, and widely known. All gardeners putter with soil because that’s how you grow food. Remediating loss of soil on a large scale is not new either; we dealt with it in the dust bowl 1930s, planting trees and ground cover, contour plowing, rotating crops, letting land lie fallow, and so on, but doing that cuts the yield.

How could all this affect you? Your company? Could it do anything to help customers reduce resource usage, improve their quality of life, or both?