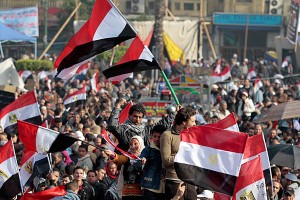 For the last two years, Egypt has been prominent in global political news, but that tends to bury deeper issues in the excitement of who’s in, who’s winning, and who’s not. Any Egyptian government will have to get beyond finger-pointing circuses to address long-term issues.

Descended from a very old civilization, Egypt is a one-nation view of accelerating global change. Think of Egypt; think pyramids. However, building that stupendous architecture depended on capturing the fertility of the Nile River. Ancient Egyptian advances were so good that Egypt survived on them for centuries. Among their recorded firsts; river irrigation, river dams, brewing of beer, and beekeeping. And while not the first to keep chickens, Egyptian chicken farms were very large and productive. In Roman times Egypt was a breadbasket for that Empire. Indeed the country’s name is derived from Kemet, meaning black soil, referring to the Nile Delta.

Until recently, annual flooding of the Nile replenished that soil, letting Egyptians raise two or more crops per year. As late as 1960, life was not Western standard, but people were not protesting: Egypt easily fed itself and exported food besides. It can’t anymore. As Egypt “modernized” unintended consequences put it in the squeeze we see today.

So what happened? Since 1960 the population zoomed nearly 400% to almost 80 million today. Food production could not keep up. Building of the Aswan high dam interfered with the flooding of the Delta, and now dams others are building upstream from Aswan have made this worse. Soil is less productive. Some of it is becoming salty from the Mediterranean. In addition, burgeoning population growth has caused rapid urban sprawl over land that was once tilled. Today, about 40% of Egyptian food has to be imported. Many Egyptians are young and restless, with nothing to do and nowhere to go.

Egypt has oil and gas, not like Saudi Arabia, but enough that oil and other exports paid for imports for several decades. Oil production has begun to decline while gas production is still rising, but domestic energy “demand” is rising faster. Like most energy and food producing areas, Egyptians feel entitled to first dibs on Egyptian output. Energy and food subsidies now take about 28% of the government’s annual budget. Oil exports are nil and gas exports have flattened. However, among other things, the government promised that every Egyptian household could have food, fuel, and electricity. Domestic production may soon not even be able to satisfy this, and the gas won’t last forever. And of course, water has never been plentiful anywhere far from the Nile River, which is now “tapped out.”

Big increases in food and energy prices strain household budgets. Despite subsidies that bust the government’s budget, these two items can take well over half of household income. A campaign to attract foreign investment under the Mubarak government fell flat. (Want to move your company to Egypt?) Tariffs and fees from the Suez Canal are down. Political turmoil is not leading to imaginative solutions, while the uproar turns away tourists, another source of foreign income. Egyptians across the social spectrum are pretty depressed, seeing no light at the end of their tunnel.

Other problems in Egypt dominate the news. Corruption is rife. The military controls much of the economy. Sectarian conflict erupts occasionally.

Egypt’s squeeze is Compression happening today. Old solutions are running out of gas, perhaps literally, so Egyptians can no longer bury their problems in economic growth. So what sequence of changes and mindset shifts could remake this mess into something offering a promise of quality of life while using much less? Hint: We’ll have to displace a lot of hoary old assumptions to do it.