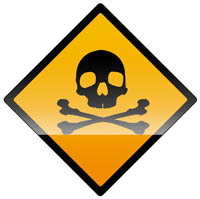 Worrywart’s are beating endocrine disruptor drums louder and louder. In very small concentrations these are known to adversely affect glandular functions and chemical balances in animals. Accumulating evidence suggests that endocrine disruption may seriously affect humans, for instance, by cutting sperm counts. Well-known effects on animals like frogs were one reason to ban bulk use of chemicals like DDT, PCB, dioxins, and others. Bisphenol A, a common plasticizer that can leach out of food packaging, may be a significant endocrine disruptor, so research is intense. (Health advocates want it banned; the Feds have not yet determined whether evidence merits that action.)

Endocrine disruption by more concentrated chemicals has been known for millennia as poisoning. But now industrial societies disperse new chemicals in the environment faster than scientists’ knowledge of their effects can keep up. Studies are complicated by the suspicion that endocrine disruption is more pronounced with combinations of chemicals; studying one at a time may not reveal this. Unless trained and equipped to study it, we can’t personally see this, but for example, beekeepers can see honeybee disappearance. That could turn out to be related to a combination of endocrine disruptors.

Endocrine disruption is one of the controversies about the gulf oil spill. Oil alone can disrupt marine life endocrinology. Some claim that Corexit, the oil dispersant BP used on the spill, is more toxic than the oil itself. Corexit is banned in Britain, but BP used it in the gulf, claiming that the alternative is a potential long-term endocrine disruptor.

The issues are tricky. Dispersing chemicals in large quantities can trigger mass declines in animal or human life, but cause and effect are hard to pin down. Toxins occur in nature, as with insect stings and jellyfish stings. Slowly accumulating ones elude perception. Consequently such threats are easy to ignore, or we invent tales like urine will offset jellyfish stings (vinegar is much better). Tracking often-contradictory experimental findings until a consensus is reached takes more time than busy people have. But using less stuff is a simple way to minimize such hazards, even when they are unknown.