EROI is becoming the standard acronym for energy returned on energy invested to obtain it. A rough consensus of those estimating EROI from various sources is about like the chart below. Different estimators’ calculations vary because a standard methodology is not settled. Despite that, the message is clear. As the world shifts toward energy sources further down the curve, the overall EROI of sources supplying energy to the United States is falling. No evidence suggests that global EROI is any better. 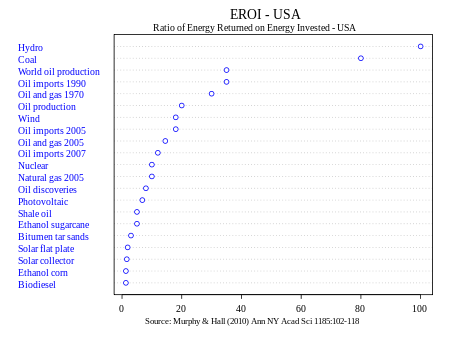 Two methodological issues plague estimates of EROI. One is defining system boundaries: counting all significant energy inputs and defining the entire process from exploration and source to the point of final use. Every Joule from every associated activity cannot be identified, but analysis must capture “the big pieces.” In principle, this is akin to identifying and allocating overhead in cost accounting. It is all too easy to overlook major process drains on energy and thus estimate EROI far too high.

The other issue computing EROI is that much energy data is incomplete or it is expressed in a currency, like dollars, forcing the use of ratios or approximations to estimate how many Joules they represent.

However, EROI is a key underpinning of industrial economies and physical system economics. Nearly everything relies on fuel energy – even food. Industrial agriculture hogs energy – and water. Burning more energy to obtain the same amount of usable energy leads to one of two responses: 1) Learn how to live using less energy. Or 2) Incur rising monetary expense, tear up more real estate, and provoke more social protest trying to expand the energy supply. The ripples from either response will roil the system.

Technically, the only outs are methods to capture energy from nature with EROIs high enough to sustain the infrastructure of an industrial system of living. Lifetime EROI should guide development of viable alternatives to fossil fuels.

Interdependencies must be considered. Energy supplies and water supplies depend on each other. Water is short in many places and that too can determine limits. In the United States nearly half of all water pumped cools electrical generating plants, although at least 90% of it can be reused. Other large demands on water: agricultural irrigation, energy extraction, and mining of ores. Because the concentration of most mined ores is also diminishing, a self-reinforcing down spiral ensues – lower EROI energy mining and refining ores that require more energy to process and that also use more water. Any substance that is more dispersed requires more energy to concentrate regardless of technology, unless nature does it for us – as with solar drying for instance.

Wind generators are one of the better alternatives. If located where wind blows constantly, it has an EROI above 15. However, this diminishes if energy generated must be stored for later use, and connecting them to a grid has sometimes been a problem.

Unfortunately, data linking EROI to monetary maps of the economy (like GNP) are mostly correlative, although the links are conceptually clear. GNP and GDP have many critics of many stripes. They do not necessarily corrrelate with quality of life. To bridge this gap, many alternatives have been devised, but none have been generally accepted.

Charles Hall and Kent Klitgaard devised a “cheese slicer” model of the physical economy. It’s based on simulations of the physical economic effects of declining EROI, from about 20:1 in 2007 down to about 5:1 in 2050. “Discretionary” energy drops from about 50% to 10%. The graph of the 5:1 simulation run (presumed in 2050) is below. It’s hard to read, but the little arrows marked “discretionary” are much smaller than the same graph for an EROI of 20:1 in 2007. 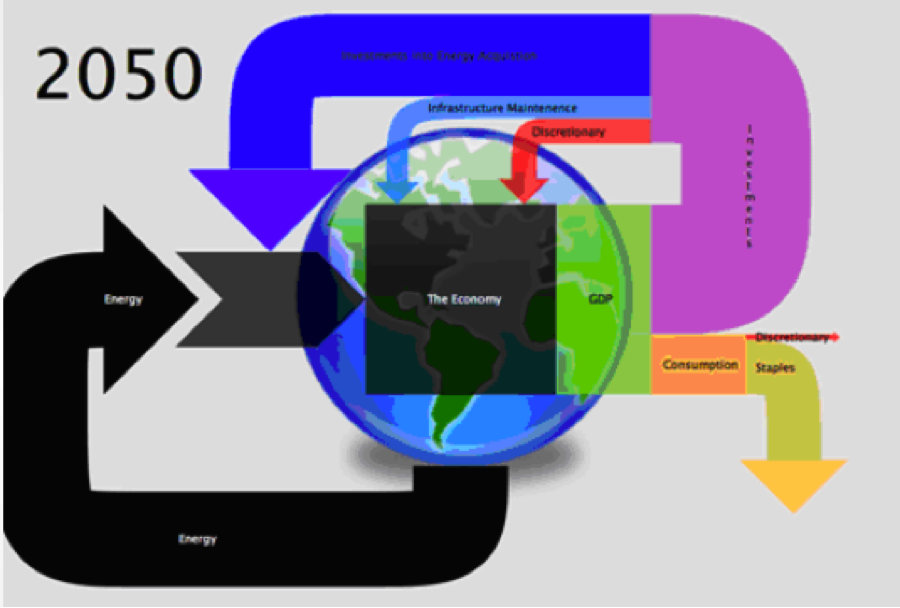 In other words, at an EROI of 20:1, about 2007, we could maintain the basics of life and our infrastructure (sort of), with a lot of energy left over for other things, from buying game consoles to taking Caribbean cruises. But if global EROI declines to 5:1, by 2050 or any other time, we would need most of our energy just to keep the basics going. This analysis did not factor in any efforts to reduce CO2 emmisions by restricting the burning of fossil fuels.

Standard business accounting and economic models cannot reveal such a picture. By the usually unacknowledged assumption of market equivalence, they rate all things traded at an equal price as equal. This is a false equivalence. Accounts show energy and water as minor costs among expenditures for everything else that we do. Physical reality is that they are irreplaceable necessities for everything else that an economy does.

Conclusion: One way or another, fundamental business and economic thinking is overdue for dramatic change.