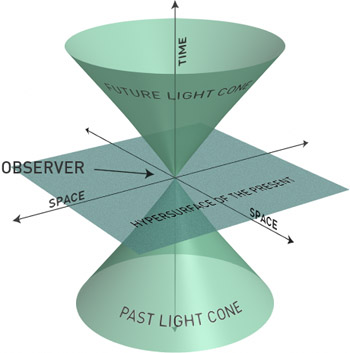 Fumbling in the dark, we grab a flashlight to “expand our light cone.” In a car at night, we hit the high beam for the same reason. And if infrared night vision is an option, a driver can indirectly expand her light cone using another wavelength of radiation. Anything warm transforms into an image on a screen that she can interpret.

Leap to the cosmic level: light cones arriving from cosmic distances must be interpreted considering the connection between time and space – with thinking adjusted to a space-time model. Light cones from space are limited by the speed of light. Light from billions of light-years away can never reach us. Much of the universe is impossible to see – ever. Any event seen far, far away is also old, old, old, not what is happening “now.” “Now” depends on the location of the observer. Galactic distances are estimated using the attributes of the light itself, so it’s complicated: red shifts and comparisons with standard candle galaxies, all pegged to the Hubble Constant. Space-time is our bigger reality, but because it is not obvious to us in the confines of earth, our thought patterns – mental models – for daily life can’t easily interpret space-time.

Similarly, thought patterns in Compression differ substantially from those of expansionist economics by which many mentally frame the world. These models filter what they detect in their light cones. Compression merely prefers to guide action by earthly physical phenomena rather than financial models of human value.  That mental shift isn’t nearly as far out as space-time, and it’s closer to reality than financial models.

All photons enter our eyes from past light cones. What about future light cones – light enhanced by anticipation and imagination, like using brighter headlights to look ahead when driving at night? The more we detect, the more we can anticipate. Detecting more opens more possibilities if we can assimilate them into a coherent pattern, an ability sometimes called systems thinking. Cultivating the ability to think systematically using expanded light cones will become an important part of future work.

How about engaging in a systems thinking exercise to expand your future light cone about your own organization? Then Go to the Exercise.