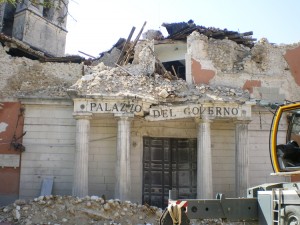 The difficulties of explaining risk are the nub of the recent conviction on manslaughter changes of six Italian seismologists and a public official for inadequately forewarning the public of the L’Aquila earthquake in 2009: 309 fatalities, over 1500 injuries, and about 20,000 buildings destroyed. Seismologists classified the L’Aquila as a “moderate earthquake,” 6.3 Richter, but losses were very high in a densely populated area.

The case has drawn media attention, but Nature has a more detailed account. The scientists were convicted, not of professional incompetence, but of failure to forewarn, letting public officials unduly soothe a panicking population before the earthquake. “Unduly soothe” is not scientific. Emotion is a major factor in how a frightened public comprehends risks.

Major earthquakes are rare events. In between, people become complacent and fail to prepare for another big event that may not recur in a lifetime. Lesser tremors may precede a big earthquake, but not often. If a sticky spot in a fault suddenly gives way, no tremors may precede a big earthquake. The murkily known geometry of a fault determines the mechanism by which it suddenly slips, releasing pent up energy.

Death, injury, and property damage arouse the public. The size of quakes doesn’t. For example, in 2012 an 8.6 Richter earthquake in the Indian Ocean cost 10 Indonesian lives and some property damage. Although the power of this earthquake dwarfed that of L’Aquila, it was a mere hiccup in world news coverage.

The earthquake that devastated L’Aquila was traumatic to those affected. Old medieval buildings collapsed. So did many new ones not up to code. Substantive preparation for a major earthquake – robust construction — takes a long time, and that had not been done. But what most angered L’Aquila citizens was the surprise. After the earthquake, fingers of accusation pointed in all directions. Soon they began to align on the advisory panel.

Ancestral lore gives L’Aquila residents a simple earthquake precaution: Don’t get caught inside a building. Residents wanted to know whether the swarm of tremors they were feeling portended an immanent big one, so they should stay outside. They queried the National Commission for Forecasting and Predicting Great Risks, consisting of six seismologists and a public official, when it met in L’Aquila a week before the earthquake. The responses confused them.

A yes or no answer to whether there would be a big earthquake was beyond the science. The existence of smaller tremors raised the probability of a big one to about 2%, which means that 98% of these “tremor swarms” simply subside. That’s the history of these things. If the panel said yes, most likely they would soon be accused of crying wolf.

Exacerbating the tension, a local retired lab technician had detected increased levels of radon emissions in the area, flatly and dramatically predicting a big quake soon. Since tremors loosen subterranean rock, more gaseous emissions come through the cracks, but do not raise the probability of the tremors leading to a big one. But such an unequivocal prediction put the populace on edge. The technician was charged with inciting panic.

Unfortunately, the visiting commission tried to calm public tension, which the mayor wanted, and they overdid it. The public misinterpreted the commission to be saying that more and more small tremors indicated that energy was being released and no big one would occur, so they should go back to normal.

To summarize, the seismologists stopped after delivering an assessment of the likely course of the tremor swarm, and muddled that by trying to calm fears. They did not do a full risk assessment including precautions to take “what if,” or the vulnerability of the L’Aquila buildings and infrastructure, which is what the public wanted. In all, the commission seemed contradictory and confusing to L’Aquila residents. No written closing recommendation clarified anything.

The global scientific community is upset by the manslaughter convictions of the seismologists, signing petitions and sounding off. Many “hard scientists” are now more fearful of speaking out when they should lest they be misinterpreted, or worse, accused of malfeasance. But the issue is less about the skills of scientists speaking to the public than about the problems of risk management when risks are manifest, but emotionally charged. Clearly presenting what is and is not known to the public is an art.

Entering an era of Compression, many more complex risks need to be explained to the public to increase understanding without promoting fear – which humans can’t stand for long without going into denial. Cultivating the arts of explaining complex facts in a digestible way would seem to open future career opportunities, whether we call it risk management or something else.