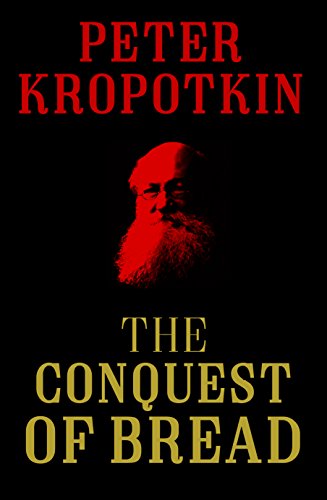 The Conquest  of Bread, by Peter Kropotkin

First written in 1892, this book was probably revised for 20 years or so afterward. It baldly asserts issues yet unresolved, not only why history evolved as it did then, but how it might evolve now, in the context of environmental dangers unknown at that time.

Born to Russian nobility in 1842, Peter Kropotkin grew up in privilege, renounced it, and lived to be exiled, twice imprisoned, and a bit player in the 1917 Communist Revolution. He became known as an architect and advocate of Anarchy, or workers self-organizing their life and work. To nobles and the wealthy that idea was unfathomable; the sky would fall. Besides, Anarchists were attempting to kill them. Even in the United States Anarchists assassinated President McKinley and shot Theodore Roosevelt.

Millions of Russians sensed that the feudal order had to go, but to be replaced by what? Unlike Martin Luther King, the king of non-violent protest, Russian rebels insisted that feudal lords and masters would never cede power peacefully. This wracked Russia in conflict from 1850 or so until well after 1917 – while Kropotkin collected ideas for worker self-organization. He called it Anarchy. It was the workers’ promised land. Lenin and most revolutionaries feared Anarchy as too chaotic, inviting counterrevolution to restore stability. Only prolonged force would pry elite boots off proletariat necks.

Communism attracted many Westerners because the Soviet Union promised worker self-organization, or Anarchy. Instead they got Stalinism coated in pretenses. Americans never suffered feudalism; they could move west or start a business, so Anarchy had little appeal. But in the early 1900s, American tycoons’ fear of violent Anarchists did make them acquiesce to anti-trust reforms.

In The Conquest of Bread Kropotkin explains Anarchist organization. All rebels wanted to displace royal privileges and managerial dictatorship with a system to serve the people; not the people serving the system. However, they fought bitterly among themselves on what that system might be. Kropotkin was the leading visionary of Communism’s airy ideal, Anarchy, or worker self-organization. But was it feasible? The one and only meeting between Kropotkin and Lenin reveals the rift. Lenin blew off Kropotkin, but saw self-organization as great visionary propaganda.

Kropotkin was supremely confident that, given their heads, educated workers would organize more efficiently than control from the top. He cited examples. He saw “it work” at local levels. Parts of his book read like advice from management consultants on employee empowerment. Other parts read like a screed from a starve-the-government conservative. At least two eternal questions emanate from his ideas:

Kropotkin was convinced that “the Divine Right to Property” would never tolerate spontaneous self-organizing. Owner control is the core of the capitalist system. If those who use property are to collectively control it, they must expropriate private property.

Kropotkin detested all bureaucratic authority; public, private, and theological. Set up no bureaucracies under any banner; no uniforms, no robes, no symbols of status. Everybody participates equally. Do away with the State, taxes, and ownership of capital. Trust spontaneous organization to evolve from this chaos.

Assuming anarchy, Kropotkin spills out ideas for self-organization in no particular order:

In school, let children learn to organize themselves; don’t force arbitrary order on them.

Make any wage system impossible. Confer all proceeds and benefits in common. Let those who earned it allocate it among themselves, like pirate crews divvying the loot.

Prefer free time to luxury. Using a labor theory of value, Kropotkin estimated that any worker could afford the basics by working only 5 hours a day (but without factoring in supply chain roll-ups). Many economists forecast that industrialization would drastically cut work time. This happened, but stalled. Why must some people now work 2-3 jobs?

Division of labor is excessive. Let towns grow much of their own food, becoming largely self-sufficient. Everyone should be part worker, part scientist, and part educator. End social opprobrium of manual labor – end class distinctions. (Kropotkin considered food security to be the foundation of all self-organizing to assure basics to all.)

Trust decision-making to those most affected; local, self-governing councils. (Local councils were called soviets, but powerless under Stalinist Communism.)

To save fuel, labor, and materials, organize community work collectively. For example, one big oven is more efficient than 100 small ovens. Set up central stores, from which everyone can draw what they need, and only what they need. (In Kropotkin’s time a majority of people lived in small villages; he obviously had that picture in mind.)

End patent protection. It impedes rapid innovation. Increase inquirers a hundredfold. Let them coach each other. Kropotkin praised an early incubator workshop for workers in St. Petersburg – a variation on modern entrepreneurial incubators.

Kropotkin even has a section on art. Art should express the emotions of real people, not be churned out for “philistine commissions.”

Kropotkin recognized that Anarchy is an ideal, as summed up in one of his few quotes, “What is needed is a more perfect cooperation.”

Anarchy long ago faded from the news: too extreme for Communists, hated by fascists, and ignored by libertarians assuming that markets will cure all. He was, and is, regarded as hopelessly idealistic, but Kropotkin’s issues have motivated many a bloody conflict. WWII – Hitler vs. Stalin – was only one.

Kropotkin’s ghosts have long haunted the mysteries of governing and operating work organizations. For example, in the 1920s “Mogy” Mogensen began inculcating Work Simplification, developing all workers to be their own industrial engineers. For 55 years he installed Work Simplification to great enthusiasm and effect, but you probably never heard of it. Within a few years, every installation faded. Asked why, Mogy reflected, “Managers think that they can control everything in detail, and the workers are just a bunch of ungrateful wretches.” Kropotkin’s ghosts, again and again.

This has improved very little with lean operations. To be fully effective, they depend on employee engagement. For the past 5-10 years the “the human side of lean” has been a major theme in lean meetings. Effect is minimal; Kropotkin’s ghosts haunt lean.

Now the entire commercial system has stirred major environmental crises. Profit driven companies are reluctant to admit that they even exist. Companies that try to trim their footprint to benefit ecology find themselves in a moneymaking bind if they compete with those that do not. Kropotkin’s ghosts wail louder and louder.

But hope may actually come from chaos rather than stability. In Rojava, a devastated region of war torn Syria, the locals are self-organizing to regenerate their ecology and a self-sufficient way of life.