This simplifies complex issues for easy decision-making, but it breaks down when event consequences are catastrophic and probabilities are low. We ignore risks like the probability of a big asteroid hitting earth in the next century is 1 in 30 million.

Formal risk management also has difficulty assessing consequences having a tangle of causes, like food prices and shortages. In North America food is plentiful and relatively cheap. Not so in many other areas of the world – but how can that affect Americans?

Locally grown food depends on local weather and water, but staple foods are global market commodities, and many regions must import food. A drought here affects global markets; so do droughts in any exporting country. The latest UN FAO global food price index is up again. It spiked in 2008, sagged in 2009 and has risen since then to just below the 2008 level. People that spend half or more of their income for food get testy about price hikes, so governments subsidize food, as in Egypt. Trade deficits for countries buying food are more ominous than the general trade deficits of the United States.

Research at the New England Complex Systems Institute has correlated violent protests in Africa and the Middle East with local food prices, as shown below: 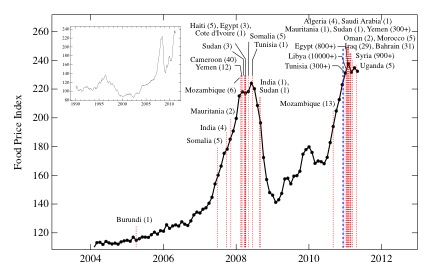 This chart is hard to read, but you can download it full size from the original source.

Using Compression Thinking what can Americans (and everyone else in the world) do about this? Can we grow more food and waste much less of that grown (big opportunities)? Can we waste fewer resources providing it?

A hopeful study has just been released to less than a full media rollout from a research team working in Boone County, IA – corn and bean country. You can get the gist of a tough read by reading the comments too. The key point is that total crop mass equal to modern “chemical farming” with 2 crop rotation was obtained from a 3 and 4 crop rotation with startling reductions in use of fertilizer and herbicide. The overall conclusion is summarized in the graph below. 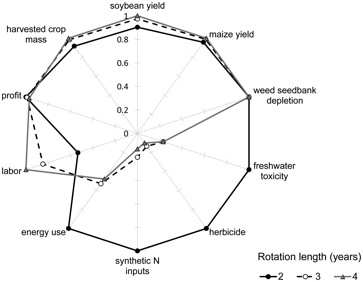 This form of diversified farming competes very well with cash crop farming on every measure except labor productivity, but it is not labor-intensive organic farming. Longer rotations appear feasible today on a large scale for “commodity crops” and local animal feedstock.

As with all research, more needs to be done to confirm the possibilities to increase the quantity and quality of food actually eaten. It’s easy to become over-enthused about this study, as may have been done in a New York Times article (see those comments too). In economic-speak, if we pay serious attention to full-factor productivity with less concentration on labor productivity, the implications for diversifying farming are huge, but we must deal with both our own preconceptions and the risks to the food supply realistically. But if we do not, the risks of global disruption seem even greater.