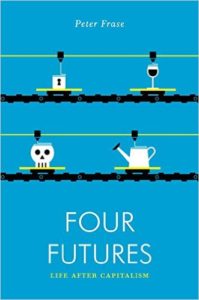 Frase is a writer for Jacobin, a left-wing political magazine that sponsored his book. Left wing polemics being predictable, this book seemed of little interest until spotting a couple of reviews by other authors saying that it was mind opening.

Critics complained that the book left too many unanswered questions. However, raising questions was the author’s intent. He denied having answers. He projects four future economic scenarios. None are advocated as either utopias or surefire forecasts. Although I took issue with evidence that Frase chose to illustrate some of his points, his scenarios paint four contrasting futures:

Frase cannot shake his preconceptions — his anti-elite frames. A boss that does not exclusively act in his own interest or in that of ownership is hard for him to imagine. If he could, his scenarios might re-conceptualize “the system” differently. However, his insight is that re-conceptualizing business as a system is much more than just enlightening owners and managers. If business executives are kidding themselves that they are improving efficiency, or doing anything effective for all of society, then we’re in for a pure power struggle. To escape that, society has to overcome acrimony over age-old issues dolled up in newer technology clothing.