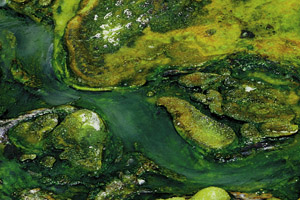 You have to know your algae. They exist in great variety from single cells to giant kelp. The mere sight of pond scum clouding clear water in summer displeases most of us, but algae blooms expanding all over the world are also a perverse resource “footprint” of the unintended consequences of industrial activity, symbolizing its ineffectiveness.

Most green algae consists of phytoplankton essential to the bottom of the food chain, troublesome only when in high concentrations it starves other life of oxygen. However, growths misnamed “blue-green algae” are actually photosynthetic bacteria called cyanobacteria, a name that suggests its toxicity to other forms of life. News from California suggests that this summer it is blooming voraciously in several rivers.

But cyanobacteria have emerged as a preferred “algae” form for deriving alternate fuels. Global proliferation of huge algae blooms are out of control, while learning to produce a good yield of alternate fuels from algae requires cultivating organisms in controlled conditions.

The infamous dead zone at the mouth of the Mississippi is an algal bloom, fed by nutrients, including excess fertilizer, washing down river into the Gulf of Mexico. (Small zones are known to form without any appreciable human contribution.) When last checked, the Gulf dead zone covered only 3300 square miles, but it could blossom to record size: over 9000 square miles. Hypoxia from concentrated algae plays havoc with fish populations, including the species we like to eat.

Dead zones are forming wherever the world has been transformed by industry. A survey in 2008 counted over 400 of them.

If off shore and out of sight, dead zones are easy to forget. However, photos from one of the biggest of the summer are dramatic. This monstrosity, estimated to cover 7700 square miles, is washing ashore in the Yellow Sea, fed by the Yellow River (China), which carries all manner of industrial and agricultural run off. A huge clean up is under way. None of this seems to bother eager swimmers, but it ticks off the fishermen.