Around the world, a lot of gulfs are in what The National Oceanic and Atmospheric Administration classifies as one of 64 Large Marine Ecosystems (LMEs) based on ecological factors, not human ownership or political divisions. Collectively, LMEs account for about 80% of the ocean wild fish catch, most of our other wild seafood harvest, most coral reefs, and much of the plankton activity vital for the CO2-oxygen cycle. Better management of the LMEs deserves high priority, but too many gulfs take a beating with little attention paid.

The Gulf of Mexico is an LME now in the news. The BP blowout is bigger than the Exxon Valdiz’s mere 0.25 million barrels; but not yet rivalling Ixtoc 1, also in the Gulf of Mexico in 1979: 3 million barrels; almost no clean up. The biggest spill ever was from Iraqi destruction in the Persian Gulf when fleeing Kuwait at the end of the war in 1991: 3-10 million barrels, almost no clean up. Now nearly forgotten, these old spills years later show surprising recovery in some areas; almost none in others. Oil spills have occurred regularly, but people soon forgot and life went on. Oil companies have seen it all before.

Or maybe they haven’t. Sizes of big oil spills are rough estimates from point sources. Multi-point spills and slow trickles don’t make the list. The gunk coating Nigerian waters would not make this list; a barrel here, a few gallons there from many different incidents and many more perpetrators than oil companies. Degradation from slow forming, cumulative effects are hard to see, and like watching yourself age, it’s accepted as normal.

The Gulf of Mexico is rich in seafood. It’s the source of about 25% of U.S. oil production (not consumption) and 16% of natural gas, with more coming from Mexican waters. Drilling in the Gulf is sure to resume, while its marine system has to revive. Abandoned oil rigs act as artificial reefs to attract fish, but that cannot preserve the overall marine ecology. Undisputed: oil in water is bad. Less recognized: Oil deep underwater could be more damaging than that visible on the water’s surface and along shore.

The Gulf of Mexico can’t be what it was, but the mess should be “relatively easy” to deal with politically. Its fisheries are among the world’s best managed. Oil drilling there has to raise its performance discipline by several notches. But remediating Bluewater Horizon does not address a bigger issue: should we keep dumping CO2, NOx, and similar petro-molecules into the air? 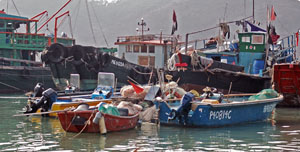 Much more wicked problems lie in the South China Sea, a big island-specked body of water south of China. Biologically the South China Sea is one of the richest and most diverse of all LMEs, so sustaining it is a vital ecological goal, but it is increasingly polluted. Gunky rivers run into it. Coral reefs are threatened. Too many boats contend for the catch; it’s overfished. And its location is crucial. Half of all global merchant shipping runs through it, including 10 million barrels of oil a day, so oil spills haven’t been unusual, and piracy remains a threat.

Although rarely in U.S. news, the South China Sea is a crossroads of conflict. Nine different governments have staked conflicting claims to parts of it. Depending on who is estimating (or bluffing) oil and gas estimates range from 7 billion up to a bloated 225 billion barrels of oil equivalent – an undersea Saudi Arabia. Deposits seem heavy in coveted natural gas, but because of disputes, exploration is incomplete. Dubious Western oil companies avoid these risks. Nationalized ones may not.

China wants to negotiate bi-laterally with the other contenders, who would gang up on China to negotiate as a group if they could unite their differences. Most disputes are about marine management, not petroleum. For eight years, ASEAN has tried to forge a mutual “Declaration of the Conduct of Parties in the South China Sea,” but the last ASEAN summit in April 2010 again failed to make progress. Will the cumulative damage eventually force squabbling factions to unite to save all humanity, or will we quibble ourselves to death?