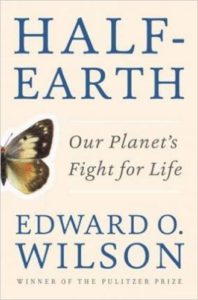 E.O. Wilson is first of all, a naturalist. That differentiates him from specialized biologists studying little slices of the field. Naturalists observe a total ecology. Wilson became well known for studying ant societies, but he had to do it by immersing himself in the total context in which ant colonies thrive or die.

Consequently, Wilson spent a lifetime painting a big picture of how biodiversity works. Now in an assisted living facility, in Half-Earth Wilson summarizes decades of observation; then ponders his big question: how can mankind preserve life on earth?

Simple: re-wild half the earth to nature, and let humans not intervene.

Human interventions, even when well meaning, diminish biodiversity. If the current trend in extinctions continues, eventually we will destroy some feedback loops of nature on which life depends, including human life. If one looks at our economic system from the viewpoint of nature, Wilson’s logic makes sense. However, if we look at nature from an economic viewpoint, it doesn’t. This is so head turning that Wilson’s book garnered only one major review – in the New York Times.

Fellow environmentalists reviewing this book on Amazon complained that it offers nothing new on specific countermeasures, but it is long on insight.

However, Wilson remains optimistic that humanity will come to its senses in time to preserve itself. He sees hopeful signs. For example, the monarch butterfly is stable, not thriving, but not extinct. However, a global turnaround depends on us clearly understanding the risks of biodiversity loss and what we can do – or stop doing. Humans destroy biodiversity through all five of naturalists’ “HIPPO” categories of disruption:

Population – more people; more of them with big environmental footprints

Pollution – from chemical toxins to plastic in oceans

Rates of extinction have multiplied by a thousand times or more in the past 100 years. The rate of new species formation is much slower, so rapid adaptation is unlikely. Some efforts to reduce extinction rates are successful; others meet with disdain. For example, contractors building a dam are incensed if a project is blocked in order to save snail darters, or whatever. Snail darters are one of many known marker species. Markers represent a huge number of unknown species, sometimes a whole ecosystem of them.

The truth about biodiversity is that it is impossible to know exactly what we doing. By rough estimate, only about 1.9 million organisms are known and classified by science, while the total number is estimated to be 10 million or more. Include microbes and viruses and we really are probing the unknown. Every new pandemic in the news highlights some little critter previously unknown or overlooked. Mass extinctions not only knock off marker species, they obliterate a lot of unknown organisms. We literally do not know what we are doing, and are often unaware that we are doing it.

Therefore a biological tipping point could come as a complete surprise. Recent research on gut microbiomes emphasizes that biology, including the human body, is not a set of independent organisms. Our bodies depend on a balance of microbes. We can’t stay alive without our symbionts. Likewise in all nature, life is a balance of symbiotic processes, most of them unknown. We are far from knowing all the actors, much less the symbiotic processes in which they play a role.

Wilson contends that by far our wisest action is to set aside places for the rest of life to care for itself. Without that, at some point the rest of life may be unable to take care of us. There is so much that we don’t know – and can’t know – that exercising the Precautionary Principle is the only way. Deep respect for nature embodies that principle.

Take for instance, the perilous state of bananas. The banana that North Americans know is the Cavendish, ideal for growing on big plantations and transporting from there to our mouths, ripening on a journey timed to end about when we want to eat a ripe one. Unfortunately, the Cavendish is threatened by Race 4 fungus almost everywhere but in Central America, and there it is expected in due course.

Breeding a Race 4 resistant Cavendish may be possible. However, it is a complex, time-consuming project, whether done by conventional methods or with the assistance of genetic engineering. There are up to 1000 different species of bananas in the world, many of them naturally resistant to Race 4. To figure out what traits might resist Race 4, where should we look? At all kinds of other bananas. However, this diversity is also threatened by all the elements of the HIPPO acronym.

Mixing the Cavendish with other vegetation instead of monocropping might slow Race 4, but diversifying is “thought” to be up to 20 times more expensive, and we like cheap bananas. Few plants lend themselves as well to a good profit margin on a commodity product, and consumers are accustomed to the yellow Cavendish. Persuading them that an alternate that “looks rotten” tastes delicious is a long, expensive marketing campaign. Business logic is to expand the plantations and markets for Cavendish as long as possible. (Have any wild bananas been driven extinct by the expansion of Cavendish plantations? We don’t know, and such a question is unlikely to come to our minds.)

For similar reasons, E.O. Wilson’s Half-Earth recommendation is unlikely to be heard, and if heard, not really understood. He speaks not the language of business, but as one seeing human activity from the viewpoint of the biosphere. From that view, he opposes environmental “Anthropocene Ideology,” which posits that since pristine nature is no longer possible, guide economic development to let man and nature coexist – a mix of green cities, farms, and parks. Wilson counters that in practice this policy will not slow the destruction of biodiversity. However benign their intent, imbalances introduced by human activity disrupt the symbiotic flows of nature. That is, parks and recreation areas are not wildlife refuges where nature can evolve as it wants. For example, environmentalists fear that opening Cuba to American ecotourists will destroy the very biodiversity that they come to see.

Nonetheless, Wilson remains hopeful. He foresees a shifting in worldview from wealth based on quantity, to wealth based on quality, where quality encompasses ecological realism – viewing nature as an ecosystem evolving as it will, not as a system for us to mold exclusively for our own benefit. Accept that, and quality of life is from human self-understanding and symbiosis with nature, rather than from piling up material wealth.

This huge shift in worldview has precedent. Before the rise of civilizations, before the industrial revolution, before financial dominance, before the digital revolution, this was the guiding belief of all indigenous peoples. However, too much has changed for 10 billion people to live as a few million indigenous people once lived. Our planet is packed. One trivial indicator of how packed is that in another generation we could have 1000 humans alive for every natural species surviving.

Mankind has never faced a situation like this. We can’t undo our past, and we can’t continue our current pathway. What guiding belief should we adopt for an era in which we can summon appropriate technology to aid our stewardship of a living environment?