Homo Deus: A Brief History of Tomorrow by Yuval Harari 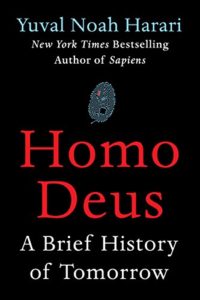 Yuval Noah Harari is a professor of history in The Hebrew University of Jerusalem, and a secular Jew. That’s important because he spends part of the book on the rift between science and religions, and he’s a neutral observer. Along the way he dribbles in history of how values and beliefs form. For instance, mowed lawns began as a symbol of aristocratic status in medieval France. Others imitated it, and eventually a mowed lawn signified status among suburbanites; now you are considered slovenly if your yard isn’t mowed.

Harari says that we need to remember that beneath the rational veneer, biologically we are still animals. Beliefs and religion evolved from that base. Hunter-gatherers lived among animals; spoke and shared with them, thinking like animals in order to survive. Nature was interpreted as Gods. Since the Gods provided, they gave back to the Gods.

Agriculture changed that narrative. By Judeo-Christian theology we were uniquely created by God; therefore we have dominion over nature. Animals – and slaves – became property. We cared for them, but they are here to serve us.

What are both animals and humans? Are we merely biological algorithms reacting to pleasure and pain? Harari thinks not; empathy for others is the important difference between humanity and artificial intelligence. An artificial intelligence may pass a Turing test by faking empathy, but can inert sensors really feel anything, or do infinite logic loops just fake it?

Christianity also introduced the binding beliefs of human centrality and reverence for ancient scripture – as presently interpreted. Conformance to similar beliefs is necessary if we are to bond together doing anything as a mass of people larger than small tribes. For example today, confidence in the value of currency – a dollar – is a belief binding together participants in a global economy is. Take that away and we’d come unglued.

We have no choice but to believe the same web of beliefs as those with whom we must interact. Common stories give meaning to our lives. Most of history consists of stories silenced because official history must support the web of myths that legitimizes the reigning elite. Changing myths invokes major social upheaval. That explains chaos today. Different elites seek to perpetuate old beliefs while others promote new ones.

For example, in ancient Egypt, the immortality of the Pharaoh was a fiction supporting the real perpetuation, the Egyptian bureaucracy that for millennia ran the system that supported life in Egypt. Pharaohs died; the bureaucratic system didn’t. Today what beliefs support the fiction that a corporation is a semi-living entity? Unending scientific progress and economic growth are two myths that fulfill this need.

But to the relationship between science and religion: A religion has three facets:

Ripping up the facts threatens religion. Science has done that for a long time. Religion struggles to keep up. Theologians have to reconcile new facts with ancient religious doctrine. Science has no built-in ethical rudder, but all scientific knowledge is subject to change upon falsification; however falsifying the basis for a belief is a killer for religion.

Here’s Harari’s summation of three forms of knowledge, or “ways of knowing:”

Humanism is Harari’s way forward, and the Homo Deus. There are different branches of humanism, but Harari thinks that it has to provide a deeper sense of common meaning than market choice, voting, perpetual growth, and other binding myths of today. Not only must we become conscious of living on a finite physical planet, we need to expand our state of consciousness in other ways, perhaps by engineering our minds into more productive dream states. Our forebears put great stock in dream states, and highly creative people today are reportedly most imaginative when “in the zone.”

Harari speculates about the future, recognizing that all crystal balls are cloudy. We have the possibility of humans – at least some humans – becoming superhuman, technically enhanced by superior capabilities. But how will their emotional, empathetic capabilities develop? Will they all be data-driven?

One matter on which Harari has confidence is that future system complexity is such that no one superstar can run the show. For example, teams program Google search algorithms. No individual genius understands how they work, and embedded artificial intelligence lets algorithms keep improving themselves.

Humans will not be the apex of any big, new networks, but more like tiny chips in a big computer, a society behaving more like one big learning system. So what new myths might bind us together? 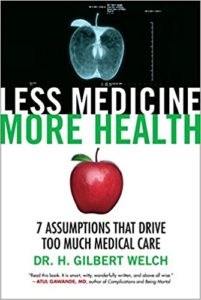 This book has been out two years, but it was brought to mind by Jack Ward and a recent article in The Atlantic, “When Evidence Says No, But Doctors Say Yes,” by David Epstein. It’s a series of stories about drugs that have been approved, and sometimes widely prescribed that do little or nothing for most patients, and sometimes have harmful side effects. It will probably up your blood pressure if you have been prescribed one of them. It is a jolt to confidence in the current drug approval process – and Congress is considering loosening FDA’s standards of approval.

Welch classifies seven assumptions that underpin medical practice today. They help drive the expansion – and expense – of health care. He asserts that much medical attention is unwarranted, and too much is harmful. We overspend on health care for not very good outcomes. (That said, no one disputes that modern medicine can work miracles compared with 100 years ago – before antibiotics.)

Finally Dr. Welch notes that a great working definition of good health is impossible. One of the latest is, “the ability to adapt and to self-manage in the face of social, physical, and emotional challenges.” If health is construed as some form of perfection, some doctor, somewhere can always find an abnormality that needs tending. Just focus on staying well, good diet and exercise, and enjoy life until something obviously needs intervention. Life and health are much more than biophysical mechanics.