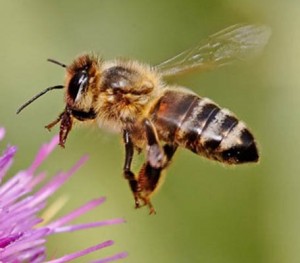 Last winter, between 40 and 50% of U.S. honeybees disappeared in the worst season of colony collapse disorder (CCD) since it was first reported in 2006. For a day or so, this penetrated national news. Both beekeepers and growers of crops dependent on pollination (about 25% of items in an American diet) are deeply concerned. Losing half of all bees each year signals a system on the brink of disaster. But can anyone do anything?

Last Thursday, a New York Times article reported on a federal study, a misnomer. It was really a conference report. Attendees from many different viewpoints laid out a long list of possible causes: Varroa mites, neonicotinoid pesticides, other pesticides, herbicides, and bee immune systems depleted by an accumulation of pathogens and stresses, including being trucked to areas to serve as pollinators.

Conferees proposed a general direction of change. Heading their list was land management reforms to generate more nutritional forage for bees close to native hives. Corn syrup is a poor substitute for natural bee food. A good question is why bees can’t thrive in the same locale as the crops they pollinate. A noted contrary example is huge almond groves in California to which bees are trucked from North Dakota. The groves cover too big an area to support bees out of season, and even the bee forage area in North Dakota is shrinking. That is, almond grove sizes are out of whack with natural cycles, and human intervention to support it has to depend on nature somewhere. This situation illustrates approaching limits for reducing biodiversity.

Honeybees are only one pollinator in trouble in what appears to be a brewing global pollination crisis. Bumblebees and butterflies also are stressed. Issues are more systemic; not confined to one species, but the honeybee crisis is getting attention. Examination of honeybee carcasses shows up to 100 different foreign chemicals. Their interactive effects in bee bodies are not known, and broader systemic problems are foggily understood also. For example, the herbicide glyphosate (RoundUp) in isolation appears to have minimal direct affect on bees, but its cumulative effects when combined with other chemicals is unknown. And more broadly, if widespread use of RoundUp kills most weeds in the vicinity of hives, it eradicates weed blooms that also supply food for bees.

Several commentators on articles about honeybees consider them the “canaries in our coal mines” – our surface mining of earth for food, that is. Bee problems involve too many interactive effects to fully understand in detail. Nonetheless, any intervention should aim for a system more resilient to disturbances.

In this situation it is tempting to dither while we wait for more evidence or seek a single magic answer. However, time is running out. Without starting remedial action, total collapse seems all too possible. Conferees in the federal “study” proposed general ideas, not a specific plan with a timetable to start learning by doing. For example, do a priority diagram of known bee stressors and promoters; then craft a plan to remove stressors, add promoters, but structured so as to carefully observe the system for signs of improvement, unraveling what was effective and what was not.

To the consternation of Bayer, the manufacturer, last week the European Union voted to ban the use of neonicotinoids for two years, to buy time looking for other effects. At least the Europeans have started learning how to remediate a sick system by doing.