The 48 Laws of Power, by Robert Greene 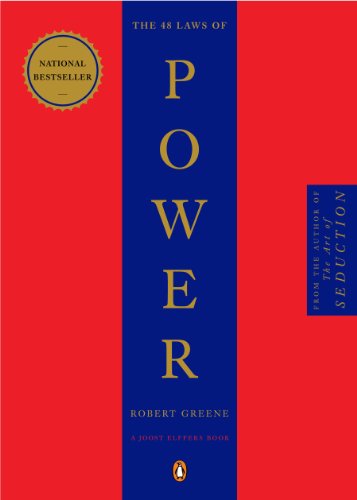 This book is 18 years off the press, but it was recommended by Lonnie Wilson as being highly popular with business readers, so I read it, or most of it. Robert Greene, the author, has made a career of writing power-oriented books about the arts of deception. Other titles include The 33 Strategies of War, Seduction, and Mastery.

The book is a field manual for that old classic, The Prince, by Machiavelli. In fact, Greene says that Machiavelli inspired this book. It’s long and loaded with examples from history, ancient to recent, and both Asian and Western, as befits an author whose life has been consumed by studying the classics. He dredges up example after example that I had certainly never seen.

Most of the examples are about the rise and fall of empires, the use of deception in wars and political conflicts, and how to excel in palace intrigue. Timeless examples, but from the view of business management, they are about dominance and subtle sucking up. Tyranny is presumed, and usually the objective is “winning” just to be winning; no mention of objectives higher than coming out on top, or not – and why.

The 48 laws range from “Never Outshine the Master” to “Assume Formlessness.” Mao Tse Tung was a master at formlessness, or guerilla war. Going through the 48 laws, it seems difficult to choose which card to play when. They tend to be contradictory. For example, Law 6 is “Court Attention at all Costs.” Law 38 is “Think As You Like, But Behave Like Others.” To make sense, each law has to fit in context. If you have played corporate hierarchy games, each law will remind you of behavior that you have observed, if not exhibited.

I’m sure that players of power games in any organization will sharpen their game from Greene’s examples, although not by some formula. They will file away ploys in wily minds, hopefully recalling one at the right time in the right situation.

Greene refers to strategy, but the laws are mostly about tactics. They say little about grand objectives, major systems change, or who change might benefit – or not. For example, Mao was a master tactician warring against the old elite, the Kuomintang. The imposition of his ideology was both brutal and ineffective. He could not recognize this, so it remained for Zhou Enlai and Deng Xiaoping to put the system on track toward the explosive growth of the past three decades. Now the consequences of that growth have to be recognized and dealt with. Xi Jinping appears to be maneuvering to do that.

From antiquity until today, Chinese political history is filled with intrigue and war, usually obscure to outsiders at the time. However, vignettes from ancient China help fill 48 Laws of Power.

The popularity of Greene’s writing is informative for managers wanting to decentralize power, giving employees much more responsibility for the business. Information systems, visibility systems, and need for fast, flexible response all line up to make a much more networked organization necessary. Our risks and rewards are very different from millennia past, or even from thirty years ago. But many people still have an instinct for power games, and for the delusion that surely if I gain control of the existing system, everything will be much better.

Looming is the need for all mankind to come together to reverse the ecological devastation of fast growth and industrialization. That creates a need, not only for more collaborative forms of organization, but for a transformation in core values. What do we think progress and success should become? Certainly not winning an old game just to be winning. How do we prepare ourselves for that? Omnilog and Deep Reflection?