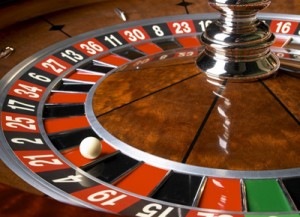 Shelly Palmer used this phrase to describe the May 18 Initial Public Offering of Facebook, described as a Grand Casino Game – a monetization of Facebook hype, positive for the winners; negative for the losers. Of course, this assumes that money defines reality. Before opening, FB asked $38 a share. In trading, FB hit $42.99; then sagged to $38.23 at the close, propped up by underwriter Morgan Stanley buying shares. In between, someone bid a ridiculous $4000 for a share, and FB set an all-time IPO volume record. To sense the giddiness, Google “Facebook IPO” (pun intended). FB closed at $34 on the next trading day (Monday). The one sobering thought: will Facebook CEO Zuckerberg buckle down to accepting Wall Street as his major stakeholder like other CEOs.

The same day, May 18 other stock prices drooped amid European sovereign debt worries and J.P. Morgan’s $2 billion debacle with a hedging bet. Since that loss is only 0.1% of J.P. Morgan’s $2.3 trillion balance sheet, why the decline? Suspicion that J.P. Morgan’s hedging games with hundreds of billions, or a trillion more in their portfolio is getting sloppy. And hedging is where the action is. Foreign currency trading alone, including derivatives, runs about $4 trillion a day, about the market volume of the NYSE stock market over three months time. Among big time traders, Facebook’s IPO was cheap entertainment.

The punch line is that money does not define reality. It quantifies human valuations, biased by hype or anything else. In the case of Facebook, the financial risk is obvious. Will streams of future income ever scale up to the hype? How can relationship services break into discrete packets, monetized as revenue? Can Facebook corner the prime social media providers? Less obviously, valuation of the whole financial system assumes that a host of parties and counterparties will pay up as anticipated. But the tangled web of derivative hedging makes assessing that so complicated that the smartest analysts (and their models) can easily deceive themselves.