Implementation Aspects of an Ecosystems Approach, the Conservation of Natural Resources Program, University of California at Berkeley, 1969-1972; doctoral dissertation, by S. Loren Cole, 1975. 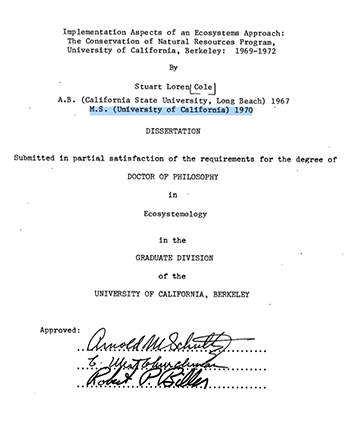 Having peered into a number of doctoral dissertations, I began this one wondering how much caffeine would be consumed wading through it. To my surprise, Loren had a good turn of phrase telling a very interesting history, written when the concept of integrated thought, or systems thinking, was just emerging from infancy. If such stuff interests you, it’s a pretty good read, especially the first half or so. I can only imagine Loren – and perhaps his advisors – tip-toing around the wording because Loren made a big crack in the linear, specialized academic disciplines of that time. That crack lingers on, but the problems of reductionism – fragmented specialization in science – remain in place.

Indeed, nearly all of Loren’s logic expressed over 40 years ago sounds much like contemporary writing on the issues of reductionist vs. systemic thinking. By its very comprehensiveness, Loren’s writing cannot be boiled down to a few morsels in a review, but perhaps a few samples will suggest them.

“Since the methods we have for identifying and understanding complexity are inefficient, we tend to simplify things to the point where we have some control over their behavior. We ceteris peribus everything. By holding certain factors constant we can then isolate the influence of a particular characteristic and observe its impact and effects. This approach is often useful for studying models of systems but is quite limiting as an effective method for resolving societal problems.

The concept of monoculture is a direct result of simplifying reality. By trying to eliminate (hold constant) any competing species, either plants or animals, and by attempting to structure the environment without regard for the totality of interactions, we improve our short-run management capability to the sacrifice of long-run stability. Effective ecosystem control requires much more than an ability to manipulate specific elements of that system. The long-run implications and the total costs (not just economic costs) of this simplifying technique cannot be ascertained with methods which limit the factors to be studied.”

The simplification of assumptions for creating models is still an intellectual hazard.

Here’s Loren again, pointing out the fallacies of applying narrow, linear logic to the banning of DDT, rather than broad systemic thinking in government regulation:

“The banning of DDT has been shown to have had some validity in terms of certain specific impacts on ecosystems. The banning process was based upon the specific effects of this particular chemical rather than on the underlying factors (e.g., persistence, highly toxic, broad range, etc.). Upon banning of DDT other similar pesticides were substituted, some of which have even greater effects. This lack of systemic thinking causes one problem simply to be transferred to another.”

Loren did not want to define an ecosystems approach because definitions, by definition, set boundaries around a concept that may preclude it being interpreted to its full extent.

In his work to persuade faculty to present an integrative course on biology, Loren developed a method for meetings that he called the Quaker Method. Take turns speaking. Give full attention to someone speaking. Learn how to listen. His rules resemble what soon became known as rules for dialog.

At the end of Section I, Loren wraps up his ideas on an ecosystems approach:

Confessions of a Recovering Environmentalist and Other Essays by Paul Kingsnorth 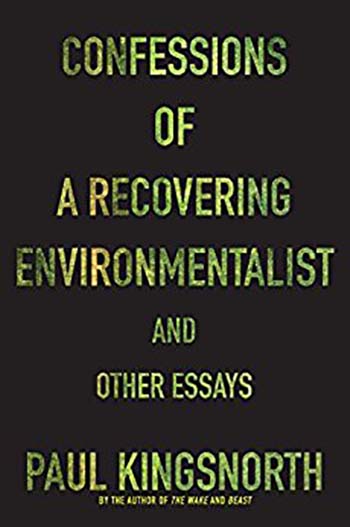 Paul Kingsnorth is a professional English writer living in Ireland, an accomplished wordsmith, and frequent writer for The Guardian. In his youth he was also an ardent environmental demonstrator, out front in many a protest. Over time he began to question the efficacy of protest, and the shallowness of many of the changes protestors advocated.

The book is recently released, but written as a series of essays over time as Kingsnorth reflected on what our relationship to earth and its ecology really means. Kingsnorth’s novels are much more popular. So far this book is obscure. One reason is that he raps the shallowness of much of what passes for environmental activism.

The book title suggests that Paul gave up being an environmentalist to happily frolic with prime polluters. Not so. He began to think about the environment systemically, coming to the conclusion that much of what passes for environmental action is grossly inadequate. We are deluded that if we just fix one major environmental problem, like excess CO2 emissions, all will be well. It won’t. We’re damaging the ecology in too many other ways. Loren Cole’s Ecosystemology brought Kingsworth to mind.

We have to work past some big delusions – that if we substitute clean energy for dirty energy we can continue merrily on our way. Or if we learn to recycle all materials, we can resume enjoying an ever-growing cornucopia of goodies. Kingsnorth concludes that the root of wild goose chases after geo-engineering miracles is a fundamental belief that drives technical civilization, from the coal mines of West Virginia to the “technium” of Silicon Valley – faith in never-ending progress in some form.

Kingsnorth finds the myth of progress to be so pervasive that few environmentalists or ecologists can shake it. We have to believe in something, in some “better” tomorrow, in a future more pleasant than the present, in a less violent form of civilization where we all get to do more of what we think we want. Paul holds that civilization is tightly tied to the concept of progress. Breaking that tie would force us to think about “uncivilization.”

The book closes with Kingsworth’s Eight Principles of Uncivilization. They boil down to stepping outside the urbanized human bubble and engaging with the non-human world.

The book leads up to Paul founding the Dark Mountain Project in 2009. The project is writers and artists dedicated to Uncivilization in the sense of changing the dominant narratives of industrial society. It began with a manifesto, a brash, clanging manifesto embellished with poetry. Only with new narratives will we find our way in world beset by damaged ecologies everywhere. The artists have not found narratives zingy enough to penetrate mainstream narratives yet, but they are working on it. A few people, here and there, are experimenting with less cushy, convenience-laden ways of living – and more important, with a less progress-driven concept of what it means to be human.

As if to illustrate the difficulty of escaping commercial thinking, I noted that the introduction of the book warned readers to beware of copying lest they infringe on intellectual property. Writers have to earn cash somehow, even if they live close to nature trying to be frugal and self-sufficient.