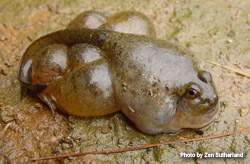 Environmental toxins are more complex than any busy person can be expected to follow. Even biological specialists unable to grasp the scope of these risks tend to issue messages that are contradictory generalizations from limited observations. That’s one form of the reductionist thinking plaguing the modern world because all of us have limited perceptual capacity.

Plants and animals produce toxins in self-defense. In small quantities, their toxins form part of the delicate chemical balance of the biosphere, which is impossible to fully understand, but easy to disrupt. Many pesticides and herbicides disrupt the biology of intended targets by amplifying or mimicking these natural toxins. But if we introduce strange molecules into nature’s balance, or toxins in larger quantities than nature can counterbalance, we can run red lights on the road to hell without noticing anything until it runs off a cliff.

Bruce Ames, a well-known researcher in carcinogens and micronutrients, recently made news by declaring that people should not fear eating commercial produce that had been treated with chemicals because their risk of getting cancer from them was lower than the range of health risks caused by diets poor in fresh fruits and vegetables. From this it’s easy to generalize that herbicides and pesticides are low risk, but Ames spoke only of cancer risks in humans, and that’s not the only risk.

Endocrine disruption is another risk that has been studied for more than 50 years, but without the media attention of carcinogens. In brief, an endocrine disruptor interferes with glandular functions in animals, including the human kind. That news seems snoozeville until a researcher points out that sexual reproduction is one of those glandular functions.  Affected species, including human, are either rendered incapable of reproduction, or if they do reproduce, offspring are horrible mutants.

The sadists among us, on hearing this, conclude that a lot of us being unable to have children takes care of the overpopulation problem, undesirables first. That 19th century thinking rationalizes that woes visiting others will bypass us, and that we might even benefit from them.  However, once small quantities of disruptors are dispersed in the biosphere, they affect all wildlife, all domestic animals, and all of us, regardless of social class or economic position. And a mighty small dab can do us in. Concentration of just a few parts per million can disrupt glandular function. Security analysts imagining terrorist plots can’t hatch one more devious than endocrine disruptors on the loose.

The message that such horrors could come to pass cannot easily penetrate the prior belief screens of most of us. Unfortunately, although done by a small community of global researchers, investigations of endocrine disruption keep accumulating. Some of it is iffy, but much of it, like research on frog disappearance, keeps homing in on endocrine disruption from human made chemicals as the main culprit.  Humans are known to be subject to similar endocrine disruption. Frogs are only faster absorbing the chemicals, an ecological role similar to that of the canary in a coalmine.

Theo Colburn, a long time veteran of endocrine disruptor research, is the founder of TEDX. That site has more information on endocrine disruptors than anyone not deeply involved can absorb, including a downloadable Excel sheet with scientific citations on 850 known or strongly suspected endocrine disrupting chemicals.

Looking at things the other way around explains why causality is so hard to pin down. About 0.4% of newborn human males has a defect like hypospadia (displaced urethra). Could an endocrine disruptor be the cause? Possible, but a diagnosing physician has at least 50 other potential causes to evaluate.

The size and the complexity of just endocrine disruptive toxicity boggle the mind. We have more perils to address than we can comprehend, much less handle. That is what led to that global challenge of Compression:

By the year 2040, globally improve quality of life to the equivalent of an industrial society while using no more than half the energy and half the virgin raw materials as in the year 2000, and reducing known toxic releases to zero.

That goal is obviously very tough to execute, but at least it sets a clear direction for overall change. Drastic reduction in the use of resources diminishes the scope and the complexity of all other problems, even those we are not yet aware of.