A Plan for a New Economy?

Jackson Rising: The Struggle for Economic Democracy and Black Self-Determination in Jackson, Mississippi, by Kali Akuno and Ajamu Nangwaya 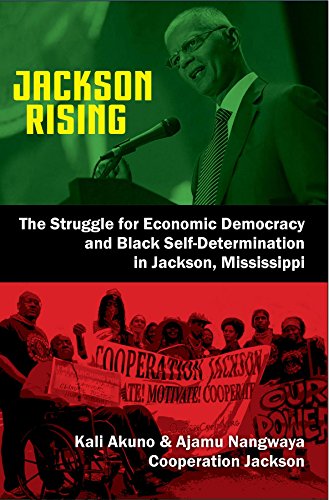 This book drew interest because of rumors that Jackson, MS was a rapidly rising experiment in localized economies dedicated to restoring ecology. The authors are editors of a collage of papers that came out of a conference called Jackson Rising.

Kali Akuno, a long-time Black activist, was a deputy mayor to the late Chokwe Lamumba, mayor of Jackson until his death in 2014. That administration dissolved after his death. Ajimu Nangwaya is a former V.P. of the Canadian Union of Public Employees, and a long-time advocate for minorities in Canada.

Their book is more of an insider’s report than a journalist’s explanation, hard to follow unless you know its background. Chokwe Lamumba was a Black attorney noted for pleading civil rights cases. That won him election as mayor in 2013; Jackson is 80% Black. During that time he “played nice” with the business establishment and was just beginning to challenge them when he died after only eight months in office.

Kali Akuno was one of the principals developing a Jackson-Kush plan to revolutionize the economies of the poorest people in the United States in the Black Belt, an area that starts in Jackson, goes over to the Mississippi River; then stretches from Memphis for a couple hundred miles or so South. In every county, Blacks are the majority population. Jackson was to be the prototype for the entire region. Lamumba’s death sidetracked that plan.

But in November 2016 Antar Lamumba won the mayor’s race in Jackson with 93% of the vote. Antar, also an attorney, is the son of the former mayor. In the intervening years, initiatives had bobbled along in Jackson. The election gave them new life. The diagram is an overview of what Cooperation Jackson has in mind: 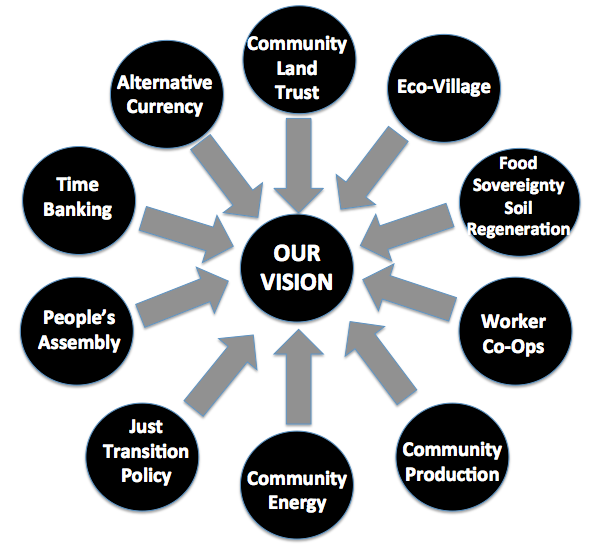 Scanning each of the 10 initiatives, the plan is a ground level program to improve the environment. Whites and other ethnic groups are involved, but the leadership is mostly Black. Scars from racial animosity pockmark the writing. More generally, distrust of neoliberal business as usual can’t be missed. Akuno has said that since the White establishment no longer sees value in the poor (mostly Black) as slave workers, they want to eliminate them – exclude them from the system until they self-destruct.

Cooperation Jackson wants to replace crony capitalism with “eco-socialism,” which is democratic capitalism, not state controlled. To crack this, participative budgeting is one idea. Let poor people vote on how public money should be spent. That dovetails into regular meetings of the People’s Assembly, which appears to be much like New England town meetings. The extent of participation in these meetings is unknown.

Cooperation Jackson is sequestering land using Community Land Trusts, using them to block conventional development and re-gentrification. Poor folks are tired of being pushed out to put up monuments or to build a new stadium. Instead create economic development with them staying in place, not being priced out of their own real estate.

Some of the land put in trust that has been abandoned is being converted to growing food. As of 2016, only a couple of acres of community garden were being cultivated, but the plan is to greatly increase this and feed locally grown produce into co-op groceries. End the food desert. Grow your own nutrition. And compost the leftovers.

They also want electricity off the grid. Solar energy is welcome.

There’s room for high tech too. They’ve experienced enough subsistence work using hand tools. In the works is a Fab Academy to coach people to design and make their own creations using 3D, CNC, and other digital methods. Learn to program. Making for outside markets would be helpful, but first make for yourself.

While Cooperation Jackson will take grants, they are not actively seeking them, and do not want to be dependent on them – or to be beholden to them. What bank is going to invest in these projects? Forget banks. Instead, instead bootstrap these plans with an alternative financial system: time banking, alternative currency, and local credit institutions run by people who understand. A form of public bank, perhaps?

Critics accuse Cooperation Jackson of wanting to turn the city “into a Cuba.” To fend off retaliation by the business elite, Akuno and Nangwaya are instigating a “Community Union,” similar to any labor union, but not specialized. Any worker in the community can belong. This idea certainly does not assuage local business owners’ fears.

Akuno and Antar Lamumba are just picking up speed. Their plan is very similar to plans in neglected neighborhoods of Detroit, Philadelphia, and elsewhere. Many of these initiatives are also minority led, and have a loose federation in the New Economy Coalition (the Compression Institute is also a member). Can these grassroots programs eventually take over from the existing economic system? That is the dream.