Kids These Days: Human Capital and the Making of Millennials by Malcolm Harris 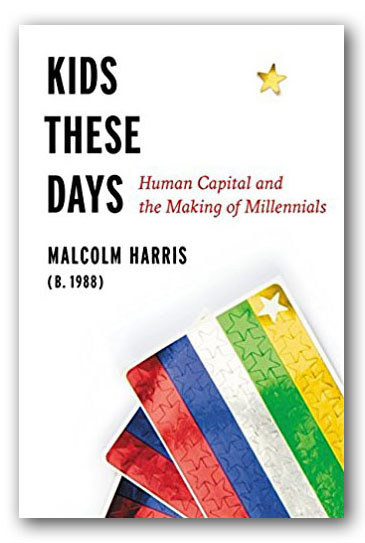 Malcolm Harris is a 29-year old millennial and a good writer explaining Millennial malaise. The Millennial generation is the first to be pinched in large numbers in the bind of the American economic system. Our economy is supposed to be the greatest, but everything they see sucks. Why?

First, everything is changing so fast that it’s hard to be grounded in anything. New technologies, social customs, and sexual practices go blinking by in hypercompetitive rushes. The urge for growth is growing. Millennials have been born and bred on smartphones to compete in a world of shiny, market-based distractions. Preparation for a career starts in pre-school. Why must kids be driven to playdates instead just knocking around the neighborhood like their forebears?

Millennials are said to be lazy. B.S. Harris says. You have to compete for anything you get, beginning in kindergarten. (Predictably, yes, some of us rebel at this.)

The system is supposed to be great. Everyone is expected to act like they are saved by it although they are damned. The big money is in trading capital, where very few lucky Millennials go. Most of the rest don’t see a great future. But how do they compare with older generations?

The Great Depression of the 1930s was an economic stall out, not a psychological depression. People pulled together. But the funk since 2008 is more psychological, a depression that isn’t abating. Asked whether most people could be trusted, only 20% of Millennials said yes, well below other age cohorts. Economists don’t have a funk indicator, but if everything is all money, depression of social trust is a big deal.

America is a society powered by growth and the growth of growth hitched to a dog-eat-dog, precariat economy. Hypercompetitvely going nowhere does not inspire Millennials already late entering self-reliant adulthood. Long preparation may have burnt them out already. To them the morning scrum of a software team is less an exciting management concept than just another waystop zipping to a place of little high tech purpose. The American dream needs a new theme.

To fix these ills, Harris has no grand plan, no wonkish policies, no deep philosophy. He merely advises fellow Millennials to Bop It! (Swat the system with personal actions wherever you can.) His Bops:

Harris ends with, “It is up to the Millennial cohort to make something else of what’s been made of us.” If nothing else, from Harris we sense a generation’s premonition of a huge change coming.

Review by another Millennial: http://www.newswise.com/articles/view/687784/