The ideas for a vigorous learning organization are a composite of the best seen in a number of companies over a 25-year span, so it is possible for real people to do these things. Migration of an existing organization to this state would take years, so it is not easy, but it seems possible.

The operational objective of a vigorous learning organization is to create that elusive ability to be both highly disciplined and highly flexible – not an easy match. In an attempt to become highly efficient, most 20th century organizational successes became too rigid to adapt quickly. Henry Ford vs. GM in the 1920s is a classic case. GM did not try to beat Ford building Model Ts, from which everybody (including Ohno) learned a lot. Instead, GM flat out-innovated Henry, who could not adapt quickly enough to hold his market. But all that was from an earlier era, and we are entering a very different one. 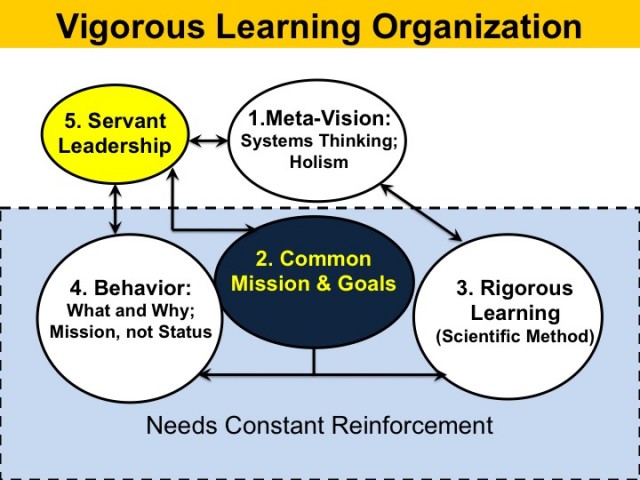 The above figure shows five major aspects of a Vigorous Learning Organization. All parts interrelate, so development of such an organization is not by independent structured projects that stack up like bricks in a wall. Instead, begin initiatives to develop people, including leaders, and use systemic structure as a framework on which human capabilities can grow. (A concept of developing people in that way is why TPS senseis, if they tried to articulate development of TPS at all, used some verb like “create” and never one like “install” as if one were wedging in another software package.)

Meta-Vision: This philosophical term means the ability to see a picture of any organization from an outside-in perspective. It includes the ability to see yourself somewhat as others see you, which is not implied in the trite phrase, “seeing from the 40,000 foot level.” While no one can completely master this, the ability of leadership in particular to stop and think about a bigger picture than the P&L statements is necessary to comprehend the issues in Compression. Change starts here.

Common Mission and Goals: In the sense used here, a mission is not a goal like making a record profit, nor even a vision of some future state. It’s a statement, or common understanding of what the organization exists to do, which could be as simple as “help people dig dirt.” If they consider it socially vital, people will unite around a common mission, and some will dedicate themselves to it. Sometimes, as with health care, a mission is so obvious that it hardly needs stating. Other times it’s not obvious, so a stated mission inhibits people from flying off in multiple directions. Of course, they will not always agree on everything, but it helps if all are working for the same cause.

Missions don’t change very often. Goals change regularly. They are statements of overall transformations or improvements that everyone can work toward in the course of a few months or a few years. Two to four of these will do. Multiple people can’t keep too many in mind at once. If you are familiar with annual strategic plans developed by hoshin kanri, the upper level objectives would be goals in this sense.

Why is all this important? People can unite around common missions and goals. Throw many monetary incentives in the mix and the carping about fairness starts.

Rigorous Learning Systems: This begins with problem recognition and problem resolution using some version of scientific logic, like PDCA. It includes asking 5 whys or 500 whys, going to the gemba (which may be with a customer, etc., not just a factory), and learning how to think critically. That’s a start; there’s more.

Common issues using such frameworks are not probing deeply or widely enough to frame a problem in context, whether it is important or symptomatic when deciding where to invest learning power. A second is not retaining what we learn so that we rework the same problem time and again. That is, collectively absorbing what individuals learn so that it is shared and becomes standard practice is not as easy as it sounds.

A learning system is incomplete without a way to capture what is learned so that it is easily accessible when new situations are faced. The filing system need not be complex; it’s better if it is simple. A3 paper files are a form of such a system, but files are useless repositories if unused. And use of a record system is two-way; as input to it as well as output from it, expected as a regular part of work. Human psychology factors in because we do not like to report negative findings or failures in detail, but that is some of our most important learning.

To explain why design and development of this system is important, consider a description of a university library, used to explain to graduate students why they should know the history of their field. “The library is our past speaking to our present so that you can make our future better than today.”

Behavior for Learning: Vigorous learning refers to collective learning by an active working organization, which can extend to big external networks. It is more than individual learning just for self-interest, although that can be a valuable source of innovative ideas. Collective learning implies sharing what we learn that is relevant to our mission or to immediate challenges. Some of us like to hide what we know. Indeed a company’s reward system may perversely encourage this by overemphasizing individual performance.

Thus behavior for learning digs into the worm cans of organizational culture, the composite of “how we do things around here.” Culture is influenced by everything, but notably history, reward systems, and leadership behavior. Changing it may be like restructuring noodles, but it can be done.

So what behavior encourages collective learning? Just developing people for teamwork, for starters. Many people have been through forming, storming, norming, and so on. Beyond that, three factors seem to help:

1. Encouraging the reporting of negative outcomes. Before people will do this, they have to actually experience that doing so is not a career impediment. They are still valued.

2. Set up a code of behavior. Better yet have employees from all areas devise one. That may take time, but the outcome is thought out from many angles, and it is theirs. Even better, have some form of organizational recognition that people actually commit to abiding by the code; like they put their John Hancock on a big thing on a wall that everybody else can see.

3. Devise a code used in meetings to straighten up someone straying off, especially if discussion is degenerating to personal attacks, or a hidden agenda is sensed. It could be a code phrase like “Are we going below the belt here?”

For most of us, behavior for learning – collective learning – is not normal. Neither Mother nor schooling fully prepared us. Instinct is to revert to form because conflict may be more fun. So once a code of behavior is in place, leaders need to be exemplars of it, and little “ceremonies” should regularly reinforce it, sort of like standing for the national anthem every time you go to a ball game.

Servant Leadership: The foundation of servant leadership by that name is a book with that title by Robert Greenleaf. However, the military version of it is short, no-nonsense, and equally applicable to any organization. In military organizations, the mission has to be the primary motivation, not money. Few people go into combat because of immediate financial incentives, so leadership has to be of the people.

The nub of this kind of leadership is recognizing that an organization’s purpose is to carry out a mission with excellence. It’s not to maximize profit. A military commander developing troops has to be aware that the next mission may be something unexpected. Versatility and preparedness are important. Finally a good commander realizes that in any tough situation, the welfare of everyone depends on top performance as a unit.

So the key ingredients of becoming this kind of leader are personal attitude, integrity, and priorities. Four simple rules of behavior sum this up:

(Because of this, ex-military commanders usually make good lean leaders too.