Kivalina is one of four Alaskan seacoast native villages eroding so quickly that they need to relocate within 10 years or less. Ice in the Bering Sea keeps diminishing; ice that until the last 20 years or so diminished the waves pounding the coast for much of the year.

Native Americans living in these villages have no doubt; climate change is washing them away. Kivalina Inupiat  are in the news as the United States first “climigrants,” meaning people that must move because of climate change. Moving a village like Kivalina is no small task. The town has been snarled in bureaucracy and litigation for a decade. 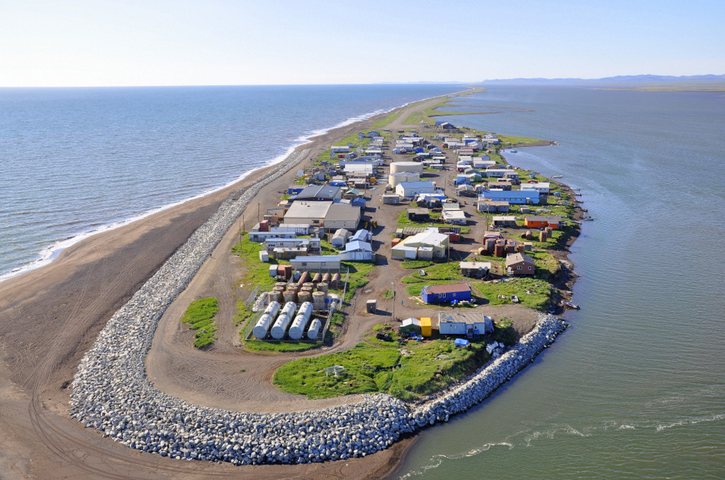 Kavalina on a Nice Summer Day 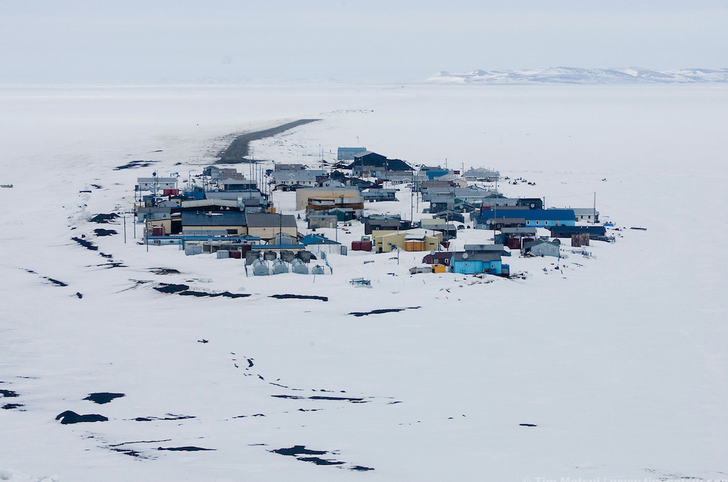 And Kavalina in Winter — Light Some of the Day

Kivalina is remote, on the West Coast of Alaska, north of Nome and well above the Arctic Circle. Almost 400 Inupiat people live there now, a fourfold census increase in a century (but was everyone counted 100 years ago?). They sustain themselves mostly as their forebears did, eating plants they can obtain in summer and sea life they can catch year round. It’s not easy. Wildlife is diminishing. Forays into the ocean or to distant hunting cabins grow more difficult because of stronger waves. In recent years volunteers have left Alaskan villages when the food catch could no longer support the population. That is, Kivalina has a problem with loss of wildlife and loss of bidiversity, not just climate change alone.

Until 110 years ago, the Inupiat were nomadic, readily moving wherever pickings were better, sometimes sheltering in igloos. They never became warlike. Who wants to fight for the privilege of living here? In igloos?

Kivalina is the only village that still hunts bowfin whale. Forty years ago environmental activists came, demanding that they cease. The activists lost their own food and their boat got lost in a fog, although the Inupiat knew exactly where they were. After three days, the Inupiat went out to the starving activists’ boat, still fogged in, and gave them enough whale meat to get back to a port. The activists never returned. The inupiat still chuckle about their reputation as “bad ass Eskimos.”

Now look at the pictures of Kivalina. Propane tanks, oil tanks, an electrical generator, aerials, and a landing strip, built in 1960. Residents can even take classes on-line from the University of Alaska, but running water and sewage are limited because of freezing pipes. Having evolved into a well-equipped remote camp, Kivalina is not easy to move. Finding an alternate spot is not simple either. Melting permafrost prevents parking all that heavy stuff on many otherwise promising locations. Sites need engineering studies and climate forecasts. As nomads, the Inupiat never had such problems.

Kivalina’s present location was set in 1905 when the Bureau of Indian Affairs (BIA) built a school on this spit of land where offloading building materials coming by sea was easy. It’s not a spot the Inupiat picked themselves. However, not all children went to school until the 1950s, when the BIA compelled Native American school attendance. After that, families had to live next to the school most of the year, so gathering and hunting centered on base camp Kivalina. True nomad life became a memory.

Obviously, a subsistence tribe with little cash income could not build a town like Kivalina. It can’t move the town on its own either, so Kivalina is the center of political and bureaucratic deadlock figuring out what, if anything, to do.

The Bureau of Indian Affairs mandates standards for villages; for example they must have a school. Alaskan state agencies set health standards. Communications systems and a landing strip are “needed” in case of emergencies. Estimates to move villages by the Corps of Engineers are as high as $1 million per person, far more money than is forthcoming. Last week the BIA added $6.5 million for tribal relocation on top of $11 million allocated earlier – nowhere close to total cost. The state of Alaska can’t help much, not now. The drop in oil prices hit state revenue hard. But publicity has provoked state and federal officialdom to concentrate on the case, seeking resolution.

In 2008, Kivalina was in the news for suing Exxon and other fossil fuel producers for $400 million to move the village. They lost. The court ruled that climate change was a political issue, not resolvable by existing law.

Over the past century, Kivalina villagers gradually took up with technology. They do make money, about $8,400 per capita, a third of the U.S. average, scraping by because they substantially feed themselves. Despite all the changes, the Inupiat and many other Native Americans still feel themselves to be symbiotic with nature, and they hang together, a necessity when often in survival mode. In a competitive economy they feel out of place. For example, intense grade competition in college seems strange.

Kivalina is a microcosm of the millstone of economic development where one can see the effect of technical and economic development free of the systemic fog overlaying a big society. A century ago, many Inupiat really did live perilously close to nature. Today, they still live as close to nature as “confinement to a modernized village” will let them – but they need to be subsidized to do it.

Now nature is changing faster than the Inupiat can adapt. Their modern conveniences are a millstone slowing their adaptability. Moving the village takes energy and technology. They can’t just pack their few necessities in a boat and paddle to a better place – a “better place” that now has to accommodate much more stuff.

Kivalina is in technical debt, meaning that their infrastructure requires daily attention. When something goes wrong, Inupiat have to fix it themselves. The more stuff they have and the more complicated, the more that must be mastered – by somebody. Between hunting for food and keeping everything running, the distractions of daily living hog brain space needed to think deeply about their long-term future. Are they better off with longer lives consumed with convenience, or were they better off with less?

Wildlife is depleting, so Kivalina is affected by loss of biodiversity as well as climate change. Reverting to a nomadic existence is hopeless. It was dicey in the 19th century with more game and fewer people. Earning enough money to move themselves is hopeless too, so Kivalina and its Inupiat lifestyle are wards of government agencies that are reluctant to “subsidize” them. So what could they do to care for themselves in ways very different from both their past and their present?

A conversation with Larry Merculieff, Elder at Large of the Tribes of Alaska put this situation in a larger perspective. The human population of Alaska as well as the whole world is now far too large for everyone to live as indigenous people once did. Our infrastructure base is a monster consuming a planet with limited resources. To strike a new partnership with nature, we need to see ourselves as symbiotic with nature, just as Inupiat still do, but our balance with nature has to be something not seen before.

As a whole, mankind has never experienced this situation. We may be able to meet the challenge, but first we have to recognize that it exists, that it is existential, and that we have to become very imaginative thinking very differently. And we have to rethink what we as humans really are, and need to become, not just what technology can do for us.

(This could not have been written without the insights of Ilarion Merculieff, Elder at Large of the Tribes of Alaska, and Terry Chapin, University of Alaska, but the conclusions are from Doc Hall.)