More Than a Structural Economic Problem 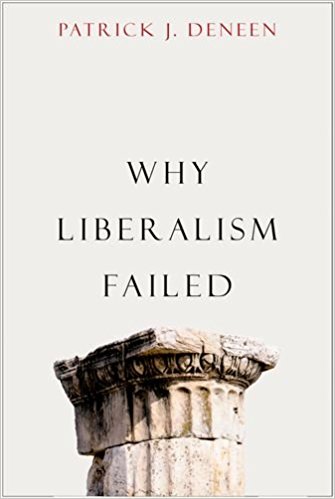 Patrick Deneen is Professor of Political Science at Notre Dame with a record of public service before academic life. His writing references ancient religion and classical studies, roundly debated by other liberal arts academics. Politically, Deneen is an all-around offender, excoriating both conservative and liberal doctrines as these are usually understood in the U.S. While they quibble over trivia the civilized basics, the glue that binds all economic and political institutions, are eroding.

Many people sense a slow fraying of social bonds. I weakly addressed social bonds at the end of my own book, Compression, so I plowed into Deneen to see how a classical scholar might treat it. Unfortunately, he is in much the same muddle as everyone else, doubtful of any grand strategy and advocating a slow change in values. His route arriving at that conclusion is a grand tour of ancient wisdom. A quote from an earlier Deneen essay summarizes most of the content of Why Liberalism Failed in his grand-sweep-of-history style:

“Liberalism was a wager of titanic proportions, a wager that ancient norms of behavior could be abolished in the name of a new form of liberation and that the conquest of nature would supply the fuel that would permit near-infinite choices. The twin outcomes of this effort, the depletion of moral self-command and the depletion of material resources, make inevitable an inquiry into what comes after liberalism.”

Deneen defines liberalism as two major changes in thought oozing out of the Middle Ages. 1) Choices: Everyone should have as many choices as possible, including opportunities to become anything they want. And 2) Nature exists for us to explore and exploit. Independence of nature is an aspect of Descartes’ mind-matter duality. Therefore we can plan our own “progress.” But for instance, even if we can do it technically, are we wise enough to guide our own evolution via genetic engineering?

The upshot is that the developed world is deep in self-made crises. Nation states guarantee individual rights in various contexts, but nation states are no longer in ascendancy. Human consumption is well beyond nature’s tolerance. Huge numbers of choices overwhelm us more than elate us. Is our “freedom” no more than fast food and cheap gasoline? Have we become slaves to our own consumption and individualistic styles of living?

Choices are the essence of a market economy, but they have social consequences. Money or credit limits our choices of cars to buy, but circumstances limit our choices of jobs (have we done 10 years in prison or 10 years at Goldman-Sachs?).

Paradoxically, if a mother must work to support a baby, but can’t afford day care, in what sense is she free? Won’t her circumstances also affect her child? Some of us envy being wholly independent; no reciprocity; no regrets; no sentimentality; no residual commitments after payment. For a while, scads of money may sustain the illusion that it can buy anything, but sooner or later, our independence runs out of gas.

Technology keeps fraying the bonds of community. People live in compartments; work, family, recreation – no time to meet neighbors. Mobility begets artificial “anti-culture,” displacing local character. Everyplace looks like everyplace else (logoed franchises and Wal-Marts, with identical dumpsters in the rear of each). Social media thinly links hordes of dispersed people. It thickly bonds very few. But a face-to-face community communes; it shares meals, work, births, deaths, storms, and festivals. Strong trust is built by enduring danger and disaster together (I got your back).

Villages now differ from those of yore. Deneen interprets the 19th century French observer of America, Tocqueville, as concluding that individualism is America’s strength promoting wild growth, but a weakness when growth stops. Competition promotes growth; collaboration is necessary for survival. Without growth will Americans sacrifice for the common good? More likely, the litigious horde will sue each other to the bitter end, ignore history, and neglect future generations.

Pursuit of self-gratification detaches us from close social relationships. It saps social trust. Why cling to boring social institutions if you can get rich quick? When fast buck opportunities end, both liberal economics and liberal democracy will fail. Anywhere opportunities are limited, democracy struggles; too unstable. Family, tribe, and community have always provided stability amidst chaos.

We agree with Deneen as far as he goes, but it’s not very far. Given that environmental dangers are deepening rapidly, perhaps Deneen and the Compression Institute both need to proclaim fewer abstract facts and more directly promote how people can do differently. We know that we are more likely to change our values from forming new habits, than figure out what new to do from barely understood values statements.