J is for Junk Economics: A Guide to Reality in an Age of Deception by Michael Hudson 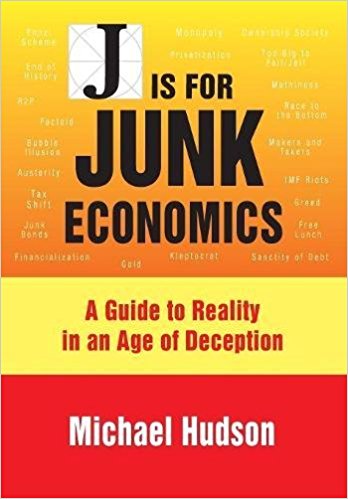 Michael Hudson was a Wall Street analyst for years before turning academic – and turning against Wall Street. He’s lived in the dens of Wall Street and delved into economic history and philosophy. That gives him both Street cred and academic cred, so it’s hard to frame him as a crank. His tons of books leave no mistaking his take on modern economics: the models guiding it are a pile of crap that justify the 1% systemically screwing the 99%, not just here, but worldwide. And he explains how they do it.

Two years ago, Hudson laid out his ideas of economics in Killing the Host. Now Junk Economics tediously summarizes that book while winding through mainstream economic jargon, repeating the same points over and over. Junk Economics opens with an A to Z devil’s dictionary of doublespeak in economic terminology. Scraping off that palaver reveals economic models to be the equivalent of the ancient medical belief in bloodletting to rebalance the evil humors afflicting anyone sick of anything.

After this slog a section of essays has titles like “Economics as Fraud.” Hudson isn’t subtle. It ends with his bubble model, which overviews his thinking in seven points:

There’s a lot more, but Hudson summarizes it as creeping financialization. All trends point toward a few institutions and billionaires “owning” everyone else, a 21st century version of debt peonage – the kind of system that the United States was founded to escape, except at that time the nobility owned everyone, not banks. In Europe, the unearned income of the landed aristocracy was called rente, a term occasionally used by economists today to describe income from social dominance, not social contribution.

Hudson fumes that economists’ shallow market-demand models came about because their education failed to include history and philosophy. Adam Smith, John Locke, even Karl Marx and on to Thorsten Veblen – all in different ways proposed how to escape feudalism. Veblen referred to the education of moneyed elites as “trained incapacity;” they fail to learn any alternative to the system that confers their privileges. Americans and their economists have forgotten what got us here.

From ancient times, no civilization has escaped gradual accumulation of wealth and power. Many maintained stability by having jubilee years when debt was erased and everyone started over – or they survived a regime change that achieved the same end.

How do you blow a financial bubble? Less by overheating a market than by inflating asset prices faster than wages. When debt payers can’t keep up, the system implodes. Hold down wages and bid up real estate prices; that will do it. When a critical mass of low-income people can’t afford housing, trickle down hogwash will no longer deceive them; they will revolt. Present day economists assume that if household debt ratios stay below a red line, everything will work out. Perhaps that’s not all there is to it.

Nowhere does Hudson deal with financialization of disruption, the unicorn business model used notably by Amazon, Google, and Facebook. The investment strategy is to pay no attention to earnings; any that come are re-invested or stowed in cash. Instead, bet on selling stock as the price rises, presuming that it will go up. But from news about unicorn companies, they seem to be deepening income disparities and driving up real estate prices in places like Silicon Valley – right in line with Hudson’s bubble theory.

Hudson is also highly critical of foreign policy of the United States, the International Monetary Fund, and the World Bank. To pump economic growth they recommend low taxes and government austerity, but expect countries in debt to pay up, international rente, if you will. Chicago School economics did not work at all in Chile; Argentina refused to pay, and most recently Iceland told foreign creditors to shove off. These countries are still surviving.

As you might guess, the combative Hudson does not expect to be invited to any administration’s Council of Economic Advisors soon. He is a mouthy darling of an alt-economics movement that is still a small minority, but growing. Part of this movement is Rethinking Economics, economics students in many countries resisting the neoliberal models of their professors. Besides Hudson, another icon of the student rebels is Kate Raworth and her Doughnut Economics.

And yet Hudson does not address the issue critical to all humanity: infinite financial growth is impossible on a finite physical earth. His bubble model doesn’t speak to it. Firing some of us up about being screwed by financial rentiers is easier than firing all of us up because nearly all of us are collectively screwing the planet.

As for how to get out of this, Hudson has little suggestion other than popularizing the thinking of old economists and philosophers who were savvy to the machinations of elites obtaining a chokehold on society.