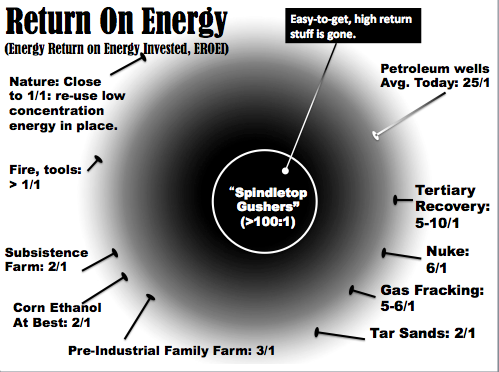 Compression refers to humanity being squeezed tighter and tighter on a finite planet having limited resources. It also refers to the learning processes by which we must address tangled complex issues in a practical way, engaging in much more effective interaction using the limited time that we have. The reasons for this are overwhelming. Humanity must learn how to love living on a crowded planet.

Whatever global climate change does merely exacerbates the endless abuses that we unwittingly heap on the global ecology, area by area. Many of these are “wicked problems” to resolve, because we roughly know the technical directions in which to head, but these may ignore many important human issues, and we can only re-learn systems and habits at a plodding pace. Not the least of our challenges is brightening up – being positive about leaving an old high-waste era and entering a new era of distributed learning, so our biggest challenge is advancing to a “higher state of civilization.”

Here’s a run down on why we must do this, using minimal citations:

Fresh water is drying up in many places, and we are contaminating much of that which is available. In the American West and Southwest cutbacks are obviously necessary and allocation of limited supplies is contentious. Many parts of the world are in worse straits – China, much of Africa, the Middle East. Dig beneath the headlines; water is a major factor in political instability in all these areas.

Agricultural soil is diminishing both in amount and in quality (topsoil erosion and degradation). Industrial commodity farming motivates copious use of fertilizer and chemicals. Critical reviews of world food systems reveal many vulnerabilities. One badly missed harvest on a global scale would trigger food crises in areas unable to feed themselves; thus depending on food distribution. Estimates of food waste from multiple causes run as high as 40-50% of total food produced. Industrial food depends on energy, so deep cutbacks in energy availability would affect it. In addition, warning flags are flying on industrial-scale agriculture for many other reasons. One is that heavy use of herbicides and pesticides appear to be damaging much more than the intended targets; sick people, for instance. Demands to drastically throttle their use are rising.

We and our ecology now co-exist in a big stew of chemicals whose long-term effects are unproven, dubious, or known to be harmful. For example, TEDX lists hundreds of known and suspected endocrine disruptors, which are sneaky threats to both humans and animals. For example, the herbicide Atrazine is known to be an endocrine disruptor of frogs by deforming their sexual organs so that they cannot reproduce. The New Yorker nicely summarizes the long-running battle between Tyrone Hayes, independent scientists, and Syngenta over this finding. Endocrine disruption could be an unspoken, unintended way to end human population expansion long before polar ices melt.

Oceanic acidification, ozone holes, diminishing habitat and biodiversity, disappearing pollinators like honeybees, antibiotic resistant pathogens; the list of known problems from human activity is long – before contemplating unknown dangers, and all of these were unknown prior to “discovery.” We seem doomed to being reactive, needing big, visually tangible personal threats to conclude that we must live more in symbiosis with our ecosystems. Distant or abstract evidence is buried in our information overload.

However, the decline of easy-to-get energy may be emerging as one that hits enough people that it cannot be ignored. The return on energy from all sources appears to be decreasing, both from established ones and from newer alternatives.

Proponents of endless growth blow off signs of peak energy or peak minerals. By their market logic, increasing prices should bring forth the technology to assure increasing supplies of energy. However, nature’s economics do not consider monetary costs and prices. It is more like return on energy – how much energy must be expended for the amount gained – and those estimates are not so rosy. A return under 1 signifies that we are expending more energy than we obtain. Globally, our return on energy from all sources, including alternatives, is dropping. 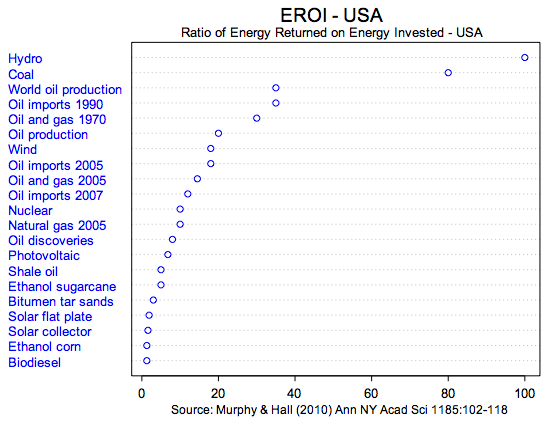 Estimating returns on energy (EROI) to compare different sources requires identifying all the major energy inputs into each process for obtaining energy (identifying every detail is impossible). Despite this difficulty, estimating EROIs dispels the illusions generated by monetizing only parts of the process or from spending cheap energy to obtain expensive energy. (A full process and its consequences are not captured by financial calculations, and no model can anticipate them all, but they can’t be hidden from nature.)

Figure 1 is a summary of some comparative process EROIs, and Figure 2 begins to portray what low EROIs might mean to us. Although they are only educated guesses, those who have examined returns on energy for a long time generally agree that if an industrial economy cannot maintain sources of energy with returns in the vicinity of 8 or 10 to one, industrial economies anything like we know them today are not viable. We won’t revert to preindustrial systems, but we won’t have “energy to burn” either.

Low returns on energy require tearing up more of the earth to get it. Improving methods of capture will help a little, but no technology can offset the basic physics of the process. Less concentrated energy sources require more energy to concentrate the stuff into useable form. More real estate is disturbed (or destroyed) and some is in populated areas, so many more people push back. On a crowded planet, we all like using lots of energy, but not its adverse affects on our personal lives, health, and property.

For instance, if the volume of gas wanted from fracking wells is to come close to making the U.S. energy independent, bigger areas will resemble a pincushion with fracking wells spreading into populated areas, diminishing the suitability of land for other purposes, like farming. Noise, traffic, smells, and contaminated water disposal make fracking wells detestable neighbors. Decreases in property values give people good capitalistic reasons to protest fracking near them – never mind what it does for ecologies lacking human population but are important to our overall quality of life.

The Canadian Tar Sands are at least as bad if one checks what is entailed in working them. Just for starters, about 66 square miles are now covered by tailings, and that is a fraction of the total area affected. More contaminated water is disposed of daily than is pumped by a city the size of Houston. Operators are obligated to restore the land, but it is impossible to fully restore such a mess to its prior condition – and moving tons of soil for restoration additionally decreases the Tar Sand’s already low return on energy. And these local issues are in addition to the fears of people who protest moving huge volumes of processed bitumen by rail and pipeline.

Such issues give rise to such derisive phrases as “stinkhole prosperity.”

But a low return on energy also applies to mining and refining minerals, from gold to gallium (found in trace amounts in zinc ore and bauxite). The same principle applies. The less concentrated the ore, the more tons of earth that must moved to get it, and the more energy applied to refine it. If that energy comes from low EROI energy, we have a double whammy. Everything becomes tougher to obtain.

Several sources other than ebullient resource companies have estimated the peak times for extracting various minerals. Without allowing for lower EROI energy, Andre Dierderan projected from 2% annual growth rates that workable reserves of almost all commonly used minerals would peak within 40 years. That is a short lead time to adjust.

Arguably the most comprehensive estimates are by L. David Roper from Virginia Tech. His formulas have been tested for the past 40 years. He does not allow for low EROI energy, but does factor in recycling. (Some is lost with every pass through recycling, so it is not a 100% recovery process.)

In short, growth of physical consumption at the present rate cannot be sustained indefinitely, regardless of the technology used. Trying to pinpoint exact dates for reaching limits is useless. Too many variables are involved. Obviously decreasing our consumption rates will make supplies last longer – but how long? It is enough to realize that we are within perception distance of the big squeeze – Compression – with changes that will probably make our experiences of the past 100 years pale by comparison.

That is why the Compression Institute holds that we must seriously prepare for a future in which we use far less stuff. The clincher argument is that were there no limits on extraction and disposal, trying to consume as much as we can makes no sense anyway. Something fundamental is wrong with an economic system that drives us to maximize consumption.

Finally, this greatly challenges mindsets in the advanced industrial world, where about three fourths of all traded energy and materials are consumed. Very few of us living in industrial economies are eager to cut back. One reason is because it strains the imagination picturing what such a different world would look like. What, specifically, would we do and what would life be like? In future episodes, we will try to paint some pictures of what that might look like. We will ask you to help.

Physically, industrialized economies evolved to run on abundant energy. Finance was the primary guidance system and a major motivator. (Just compound interest is a growth formula, and expectations of growth are baked into the system.) Energy propelled very rapid expansion. But with the big squeeze approaching, this guidance system needs deep rethinking; more than a few tweaks.

Fortunately, the existing system is not totally misdirected. It has evolved at its fringes a lot of thinking that edges us in a new direction. The lean, quality, and sustainability movements all value the elimination of waste, and we can build on the disciplines of this kind of thinking. Policy level changes are desired and necessary, but the Compression Institute is dedicated to helping us learn at the operational level where “things are done” how to create model initiatives to cope with the realities we see approaching.