Neurotheology: How Science Can Enlighten Us About Spirituality by Andrew Newberg 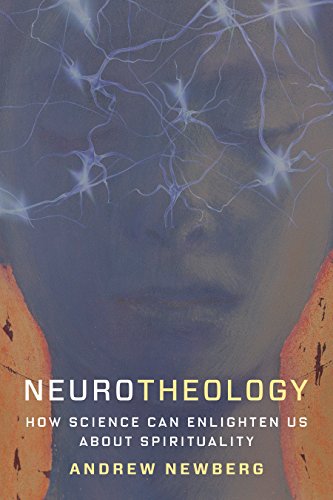 Andrew Newberg is an MD and Professor of Emergency Medicine and Radiology, and
Director of Research, Marcus Institute of Integrative Health, Thomas Jefferson University and Hospital in Philadelphia (how does he cover all this?). Neurotheology, just out, is his newest book.

The book attracted this reviewer because of its integration theme. Newberg tries to bridge the big gaps between different ways of seeing the world, mainly between science and religion, or core beliefs based on science with core beliefs based on intuition. Neural research techniques have advanced rapidly in the past 30 years or so. Based on his own research and that of others, Newberg explains how the brain makes sense of the world. His deepest question is whether any such thing as reality exists, and if so, whether humans are capable of perceiving it.

Newberg describes the brain both physiologically and as a functioning organism, trying to relate the two. The brain is a happy prison, from which we peer out trying to infer logical patterns in what we perceive, but brains collectively can’t grasp the grand totality of the universe. Like the dwellers in Plato’s cave, we’re forced to infer from shadows on the wall. Some inferences can be scientifically proven; others, like whether I love my wife, we can’t, but even proven science is incomplete. We can never know it all.

Sharp divides between religions have led to wars, or are invoked to inflame hostilities. Strict atheists are religion-averse; science should not accept old tales, while absolute truth fundamentalists are enraged by science questioning matters of faith.

We’re also trapped in our memory systems. Religions try to capture young brains early to guide them, believing their doctrines to be pathways to societal living, if not eternal life. Any major change in beliefs is traumatic, a mystical experience.

If you are interested in deep questions, Neurotheology is a thoughtful ride, but not a fast one. Prepare to digest a lot of detail and prior studies. One section describes the current understanding of the physical brain; another the practical aspects of using brain measurements to infer what is going on during various experiences. None of this is simplistic. The brain works as an integrated whole with myriad feedback loops; it’s no mere intricate mechanical device. Newberg steps beyond reductionist science, so his book packs in too much to cover in a brief review.

Newberg is familiar with all the world’s major religions, from Catholicism to Buddhism. He investigates the neural processing of each, seeking practices that can be characterized by neural measurement, but he sticks to religion. I was hoping that he might look at economic ideologies – money worship – as religions. He didn’t, but analogies are enough to spark ideas about the environment vs. economic beliefs.

Our neural workings have both conscious and sub-conscious patterns, both affected by genetics and our environment. Emotion affects conscious cognition, and cognition – our belief system – triggers our perception – what we look for as well as how we interpret it. Most of the time we detect and deal with immediate tasks and concerns. However, how we approach tasks depends on how we see ourselves, whether as a central me, differentiated from all other around me, or as somehow connected to everything in the universe, which Newberg calls our sense of unity, and others call “the great oneness.”

Ethics are codes based on beliefs. Our ethics vary depending on a continuum, from concern just with me at one end, and concern for the whole universe at the other. Concepts of good and evil emanate from where we are on this spectrum. If me-centered, good and evil are just conceived as whatever benefits or harms me, or my tribe. These concepts plant the seeds of conflict.

If we are universe “centered,” no easy reference point for good and evil exists. No matter what we do, some harm results to something. Decision-making is more complicated – might require dialog and much more thought and energy. Hence we need forms of organization well beyond command-and-control hierarchy.

Transformation as a Mystical Experience

Some adherents to all faiths report mystical experiences, or epiphanies. Neurologically, these are intense thalamic activities by which the thalamus reprograms the entire brain. Those engaged describe them as suddenly “getting it,” finding a new sense of purpose and meaning, a “calling.” Mystic experiences also reduce depression.

Mystical experiences move people toward unity, toward a sense of serving others or a purpose beyond one’s self. Those transformed leave their ego prisons and experience a significant whole. Their parietal lobes no longer process me-other information. Question: Is mystical experience driven by the brain – free will – or is it prompted by “the great oneness?”

Religions adapt, but slowly. Christianity Is not what it was 500 years ago; neither is any other religion, but our ethics trail way behind technology. Old religious codes don’t cover modern dilemmas like when to pull the plug on a loved one’s ventilator, when life begins, genetic engineering, ecological degradation, or on-line mind manipulation. More and more people are dropping out of formal religion, but some remain spiritual – like New Age venturers. Some become atheists, but still seek something that they have not found. We need new foundational myths from which to encode ethics.

Having covered an enormous sweep, Newberg concludes with a vision for Neurotheology as a bridge between science and religion. To do that he has two proposals:

Investigate and develop a metatheology, which is general knowledge applicable to any theological system by asking three primary questions:

And second, maybe, just maybe, humanity could unite under a megatheology with emotional oomph, but compatible with existing beliefs, so that migration paths open. A megatheology is one that everyone – or almost everyone – could accept as their primary belief system. Humanist “creeds” or United Nations codes are tentative steps in that direction, but there are not many epiphanies yet.

This reviewer is unsure that Newberg’s vision can materialize without also treating economic beliefs as a religion and working out a megatheology to cannibalize them.