Coffee With Doc: Propping Up The Sky

Even before 2008, queasy economic forecasters projected financial meltdown of a global economy propped up by debt. Believers in unending growth accused any pessimistic prognosticator of being a Chicken Little warning that the sky is falling.

The Shakiness of Debt-Fueled Growth

To prime economic growth, central banks, including the U.S. Fed, are emptying their tool kit: zero or negative interest rates (ZIRP and NIRP); quantitative easing (printing money); and “yield curve control.” Besides kick starting growth, they aim to stave off devaluation of assets, like stocks and real estate, that bubble popper of 2008. Although they do not control government spending, central banks may advocate austerity, or tight spending. They assume that healthy capital markets will prime new investment, more jobs, and thus, economic growth. But that old pump is leaking; one estimate is that 85% of quantitative easing goes into global money trading, not new loans. In economies like Greece it’s not even staving off collapse. Are central banks propping up the sky?

Policy makers fear that the world economic system is slipping out of financial control. A fundamental question is whether future income growth can pay off its past debt – whether the future can pay for the past. If repaying debt is hopeless, perhaps this voice out of the financial fog is trying to tell us something; that the present has to pay for the future, a complete flip in thinking. If unable to imagine this new world, we fear it.

Policy gnomes are not the only ones queasy. Sensing that things are not going well, the public is losing confidence in the gnomes. One reason for the tumultuous 2016 U.S. election is low public confidence in American institutions and economic nostrums. 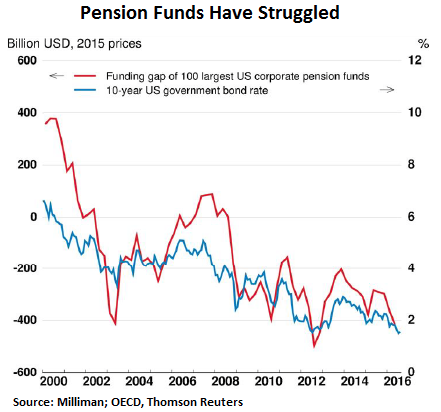 Symptoms of financial sclerosis are abound. For example, low, safe returns from sure thing investments are hard to get. Retirement funds shun high-risk investments, but puny yields are barely enough to pay retirees (Fig. 1).

Corporate debt is rising. Why? Borrowing is a cheaper source of capital than issuing stock. Led by student loan debt, consumer debt is also rising. Mortgage debt is easing back up. Gnomes consider debt to be manageable as long as debt/income and debt/asset ratios are “low.” However, the “gig economy of precariats” is also growing. Lifetime employment with a middle class income is fading. Kick away assurance of future stability of either incomes or asset values, and another debt implosion is upon us – a repeat of 2008 that the Fed is trying to preclude.

Of course, that political scapegoat, Federal government debt, has now risen to over $19 trillion. Total global debt – all government, commercial, and consumer debt – is also rising rapidly. It’s now estimated at $230 trillion. To keep payments on debt coming, central banks are floating the idea of guaranteed payments to all citizens, working or not. This is called helicopter money or social security to everyone. The hitch is that guaranteed income is a political decision, not a central bank option.

Is helicopter money the modern version of ancient “jubilee years,” when all a tribe’s debts were forgiven – “wiped off the lenders’ books” – and everybody started over? No. Helicopter money does not forgive debt. Lenders still collect their money.

And to whom is debt paid – besides loan sharks? Much of it is to banks, national treasuries, and sovereign wealth funds. Realizing this, an indicator is Net International Investment Position, foreign investments less foreign debt. As shown in Fig. 3, The United States’ net debt is $8 trillion and deepening. It’s now about eight times more than the next biggest debtor nation on the planet. And what big creditors are buying this debt? Japan, Germany, China, and Taiwan. They buy our debt; we buy their stuff. This system of debt-fueled expansion has primed global economic growth for decades. 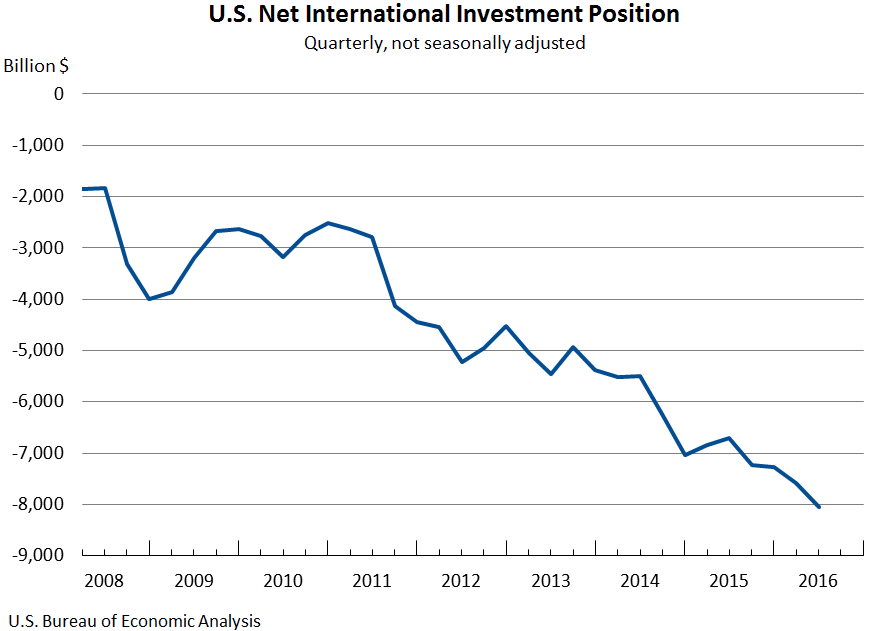 Incentives of the System Taking Us Astray

What do the incentives of this system do for us, or to us? Enron and Well-Fargo are egregious examples, but they violate the values of the existing system. What do the drivers built into this system’s values do?

Summaries of ROI by industry, for instance by CSI Market, show that basic, capital intensive “infrastructure industries” tend to have an ROI of 2-4%. The software and programming industry is more like 10-12%. The system has a bias toward fast growth and high returns, tempered by risk, so that’s where hot money goes. However, this bias hampers addressing pressing collective problems, like investment to maintain and upgrade water systems. Ratepayers paying down that investment over time are reluctant to pay more. Deferring maintenance until it is critical is an easy decision.

Even easier is deferring attention to environmental problems. By ROI logic, investment in the environment must earn a return to a company or community. A ploy to trick this logic is recognizing external costs and monetizing nature at a high value. However, these valuations still use human markets as a reference point, and retain the short-term bias of financial logic.

Another driver of this system is commodity competition – the Uber effect – drive costs ever lower; cut out “middle man” transactions; minimize tax liabilities. A local tax example is big box retailers suing to base property tax appraisals on empty store buildings instead of active businesses. Dare we assert that businesses play governments against other, competing to be the lowest cost location? Thinking deeper down, is increasing productivity, getting more and more stuff cheaper, always a good thing? Not if we think ahead toward a resource short, pollution choked planet.

We need to flip our thinking to a different channel, driving our decisions by criteria based on a different value system – but people can’t instantly flip to a new value system like downloading an app. We need a new, long-term, blue-sky vision, unclouded by me-centered financial thinking. Aeon has an example of a high-tech, environmentally unaware vision. Here’s a simple, environmentally aware vision:

However, a cryptic vision only clarifies with examples. A small one is Exxon’s “over-valuation” of their petroleum reserves – and allegations of deliberately spreading disinformation to sow doubt about climate change. The value of reserves depends on size, concentration, and the ability to extract fuel at a profit. If the price of oil doubles, should the value of reserves double? If it drops by half, should the value of reserves drop by half? Although projecting the dollar value of reserves is not that simplistic, ask a more fundamental question. Why should companies assign any value to reserves on balance sheets; then hang bonuses and stock prices on them like ornaments on a Christmas tree. Is this glitter an illusion?

Naturally, non-monetary concepts of valuation will meet resistance. Everyone involved has to think more deeply and systemically. But that’s the reason we should do it.

“Low-income housing” is another bugaboo example. Jay Forrester modeled urban housing patterns in system dynamics simulations 50 years ago. Many variations of his models with different assumptions have been run since. Some models replicated the situation in say, Detroit. All model variants recognize that housing problems do not disappear by building domiciles – the old Soviet solution: slap up gray slab buildings. All models framed the situation using housing markets and employment markets. New upper and middle class houses let the “underemployed” move up into depreciating older upper and middle class housing – a re-gentrification model. But without boosting employment and wages, low-income housing was a social failure.

Buildings are but one element of bigger “socio-technical-economic” systems. A shelter is a home when people add their touch and accept it as a place that they want to be. That is, they feel comfortable in the neighborhood. It serves their felt needs.

A conclusion drawn from systems dynamics is that building durable quality housing promises a better future than short-lifetime affordable housing. However, maybe we should re-frame the entire situation. What kind of districts and communities will serve human needs and also be a low-consumption, circular economy?

Although this vision is very general, with pictures something like these in mind, we can work toward doing better while consuming much less, working out the particulars as we go. In fact, here and there people are actually working in this direction. We just need to make this new vision more popular.