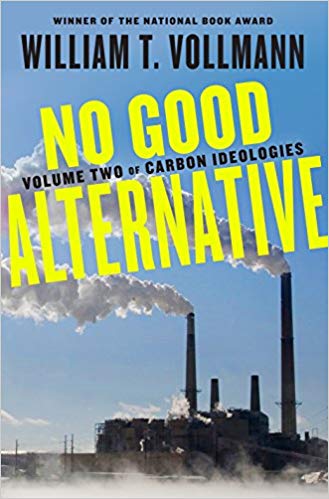 William T. Vollmann (Bill) is a prize-winning professional writer, noted for being adventurous researching his books. For his first, he embedded with the Mujadin fighting the Soviets invading Afghanistan. He follows a story wherever curiosity takes him. This book is no different. It is the stories he pursued after becoming curious a few years back whether our environmental threats are real.

Bill wanted to title this book Carbon Ideologies. He writes very looong books. Editors decided that it was too long to wrap in one cover, so No Good Alternativeis Volume 2 of that book. It’s long too, although not dense, and I could not finish Volume 1. It froze my electronic reader.

Volume 1 covers nuclear energy, mainly the aftermath of the disaster at Fukushima. Bill went there, poked into the site, and spoke with resident victims of that disaster, as well as officials at Tepco, the power company that operated the Fukushima nuclear facility.

Volume 2 is about coal and oil, principally the fracking industry. About half of it is Bill’s wandering conversations in the American center of coal, West Virginia. He talked with the miners, their families, coal operators, protesters, neighbors, and officials – anyone that would talk. He did the same in the fracking fields. That is, Bill investigated this thing called global warming as any citizen knowing nothing about it might do, with no pretenses of any special expertise, and no careful research plan.

All the way through Bill is writing a letter to our successors maybe 50 years hence about how people think now. He does not paint a pretty picture. How could their forefathers be so deluded? Here are some summary observations:

We had a democracy of opinions, but lacked any ideas, let along policies.

We were reluctant to measure anything in the hope that problems thereby might go away – or at least stay hidden.

Most of us lived and died for money.

You can’t prove a theory like climate change to be correct. People want geniuses to do that for them, but it’s either false or incomplete.

Benefactors of the status quo, whom Bill calls “the regulated community,” concocted wild excuses to hang on to their “carbon ideology.” For example, climate change was made up by the Chinese to make Americans less competitive.

Industry fought serious regulations or safety practices because they thought those made them less competitive. Escaping serious scrutiny raised the cash value of companies.

Fossil energy companies rode roughshod over everyone else. In West Virginia any official not agreeable to coal companies had a short tenure. Managers masked ugly practices with donations and philanthropy. They gave extras to the same communities whose water, air, and soil they contaminated beyond restoration. At one point Vollmann describes the system as “the carbon combustion complex.”

Companies were good corporate citizens if they did just a little to help the environment or employee safety; then tooted their horn – greenwash. Vollmann came to see that cosmetic measures are far short of anything needed.

But plain Bill Vollmann is at his poignant best describing the plight of West Virginians surviving with eroded land, contaminated water, and foul air, but still supporting Big Coal because it’s the only prosperity they had ever had. They were proud to “keep the lights on.” His photos help tell the story of their ramshackle, coulda-been communities.

How Vollmann presents his stories sharply contrasts with Paul Raskin’s academic prose, and it probably is more convincing to most people if they bother to read his book. Most of his subjects have an inkling that something is deeply wrong, but they can’t put their finger on it and don’t want to believe it.

Vollmann presents no grand vision of how things could be better. He has been dinged for not technically understanding some of the issues in depth, but perhaps he has better clarity of insight than his technical critics. He realizes that the bedrock of today’s technology is crumbling – has to crumble – and that we are lost in our confusion and in our reluctance to do anything about it.