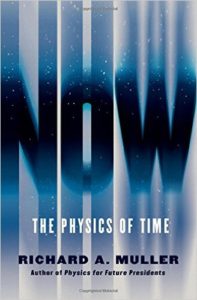 NOW – The Physics of Time by Richard A. Muller

Muller is professor of physics at Berkeley, best known recently as a skeptic investigating global warming, reluctantly concluding that the evidence points to it – with reservations, of course. However, his book, Now, is a review of physics leading to Muller’s hypothesis that since time is integral to space, time is increasing because space is expanding. It’s an easier read on relativity and space-time than any other I’ve seen over 50 years or more. Read it thoughtfully, and you will dig it.

So why plow through the physics of time? Because Compression Thinking requires a shift in the reference frames by which we understand our human roles in the world, and physics is an extreme example. It has regularly undergone startling changes in reference frames as it has learned more about how the universe, from quantum level to astral level, actually works. Or more accurately, it has developed different models with different fundamental assumptions to better explain observations that cannot be detected by our unaided eyes. Physicists could not interpret them without adopting frameworks of thought differing from those adequate for human scale tasks like hanging a door.

E=mc2 began to change everything. Mass and energy are interchangeable. A photon at rest has zero mass, but when it begins to move, it picks up mass. Therefore a beam of light should bend going through a gravitational field, and it does, as shown by an experiment in 1919. Anything that has energy also has mass, and vice versa.

So keep turning your thinking away from the world as you ordinarily see it, and think of it as interpreted by General Relativity. Gravity is motion. Something is moving, although from our reference frame it appears to be standing still. Sitting in a chair, you appear motionless, but are moving upward without knowing it. Planets orbiting the sun “think” that they are moving in a straight line, but space-time is what is curving.

Obviously, compared with how we see things daily, all this seems goofy. Few of us need to be concerned about it, but some of us do. For example, for a GPS system to be accurate, calculations have to compensate for the difference in time frames between one place and another. But to users, all that is an algorithmic black box. We don’t have to think outside our framework — our box.

All time is local. Here on earth, time is referenced to earth’s rotation and to its orbits around the sun. In far distant space, that reference is lost. “Now” is only the present instant where you are, and new “Nows” keep being created according to the motions by which local time is kept.

Using space-time, regions of the universe are described as local energies and momentum densities. Local time, or what appears to a local observer to be time, is a consequence.

Physicists are still seeking a better definition of gravity in the equations that describe all this, or what they call a “theory of everything.” However, they know that everything is not comprehensible. Their next best model will only create another set of questions.

Without trying to summarize Muller’s entire line of General Relativity logic to explain black holes, worm holes, etc., his ending speculation is that time advances with the expansion of the universe, which is expanding faster than the speed of light, creating new “Nows” everywhere as it goes. Therefore our understanding of the universe can never be complete. It’s impossible to see all of it, and new “Nows” continue to unfold.

Muller ends with a useful bit of wisdom criticizing “physicalism” in his profession. That is the belief that if something isn’t quantifiable, it isn’t real. That is, everything should be explainable by a model. An extreme version of that, easy to slip into, is that anything that does not fit our current theories and models isn’t real.

But what does this have to do with Compression Thinking? Well, we need to escape trying to frame our understanding of our earth-bound situation according to the theories and measurements of current economic and financial models. That shift should not be as mind-boggling as learning to think in a space-time framework, but maybe it is.

A number of books on economics are portending the collapse of the system as we know it, and especially the financial system. Here are a couple of them:

The Rise and Fall of American Growth, by Robert J. Gordon.

The Bubble and Beyond, by Michael Hudson.

These and similar books point out that the financial system is shaky, that it is exacerbating the divides between rich and poor, and that debts being incurred are likely never to be payable. That’s OK. Our social problems are not clearly separable from our environmental ones, but these authors don’t dig into the environmental ones very far. Perhaps that’s because their models can’t interpret anything that does not fit into them.

A similar situation clouds proposals to fix environmental problems with carbon markets, carbon taxes, and regulatory constraints on markets. These ideas try to fit environmental crises into the framework of a market based economy. Maybe they don’t fit. Maybe they don’t fit ideas of a socialist economy either. We have to overcome the limitations of our prior modes of thought, and create more imaginative systems than those suggested by our past. No lone genius can do that, but collectively we might be able to do it.