Regular readers of this page know that the Compression Institute advocates radical change toward regenerating ecology. Progress toward that is evident, but slow. To speed it up, we need a radical change in us, faster than human societies have ever changed before.

Is that possible? If so, how do we start? By asking ourselves some questions.

Seriously pondering these questions reveals what drives us, something we are reluctant to reveal, even to ourselves. Do we want more money, more travel, a big house – things for ourselves – or do we want to better others and the environment – fairer justice, fewer environmental hazards, etc.?

Honestly answering is gutsy. These are taboo questions. Instinct is to deflect them with humor. Opening up risks being considered naïve – hopelessly idealistic, vulnerable to attack by pragmatists still playing power games. Deep Reflection digs down where we live, but if we do it, we form bonds of trust.

My personal response to the questions: leave the world, or at least part of it, on a path toward regenerating ecology, with business processes supporting that objective.

That’s the goal of the Compression Institute too, but how to progress toward it? No phrases explaining it go viral: Live better using less; Continuous Regeneration; Vigorous Learning Organization; Compression Thinking. We have to dive below symbolism to really understand how we must transform to live by Compression Thinking. That is not a one-person task; you need to help us. To do it, we propose “Omnilog” and” Deep Reflection.”

Where Are We Hung Up?

Omnilog and Deep Reflection derive from systems thinking. It’s ancient, but we’ve forgotten how, and now our fractionated thinking inhibits dealing with many issues, including environmental ones. From soil degradation to climate change, interrelated threats include some that no one is aware of. But our biggest threat is us. We’re part of nature and don’t know it – because we’re not systems thinkers, or if we are, we’re far too shallow.

Nobody can think consciously about everything at once, much less talk about it all. Attention has to go “down rabbit holes” exploring one issue at a time, and it’s easy for fractionated thinkers to hibernate in one hole and never come up looking for others.

We usually think of systems as human made, either computer systems or bureaucratic ones. To many of us, human built systems are complex labyrinths, murky and forbidding, like tax codes. However, modern life depends on these systems – and often on gaming them. If they “work” we don’t know how; if they don’t, we don’t know why. (Simple human systems work better because, as observed by Yogi Berra, “If I understand it, it’s simple; if I don’t, it’s complicated.”)

Nature is a system of systems, intertwined loops that nobody can fully understand. Destroy them and we don’t understand what we’re losing; maybe part of ourselves, psychologically as well as physically. Exposure to nature, even in small doses, calms us. Whether conscious of it or not, we’re part of nature’s system of systems.

But perhaps the most mysterious systems of nature are our own inner workings. Can we control our own motivations and behaviors? We think of ourselves as civilized, but human strife and violence consistently prove otherwise.

Systems Thinking and Its Impediments

In a fashion, ancient peoples were better systems thinkers, but modern systems thinking struggled to life during the 20th century, perhaps as a reaction to knowledge fragmenting into specialties. For example, my wife has seven doctors; her mother relied on only one. Only her vigilant intervention keeps all seven coordinated.

In a short video, a well-known promoter of systems thinking, Peter Senge, cuts to the core of actually mastering it – communicating without tangling in misunderstandings and conflicting beliefs. If we can master that, all our conflicts, including those between natural and man-made systems, become more resolvable, but we must learn how to overcome deep layers of “human nature. ” How deep? To the instinct level.

For example, ask most of us what our biggest loss would be, and it’s our own life. But there are much bigger losses than that, as illustrated by Nicholas Taleb. 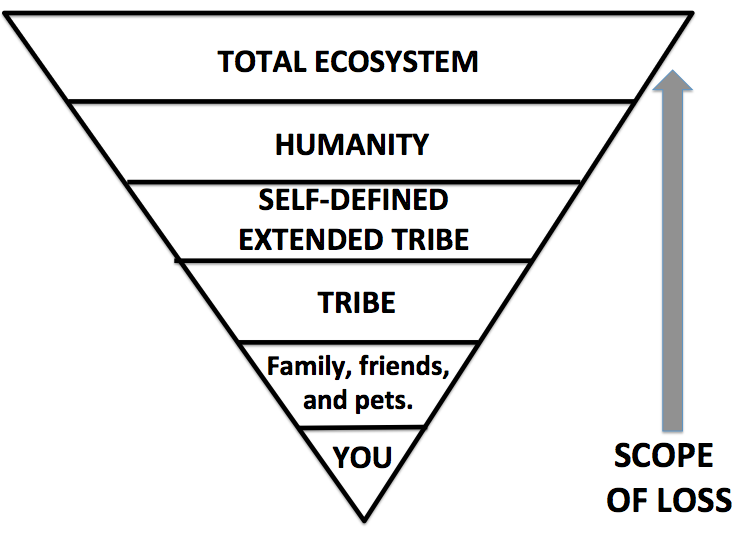 As Taleb notes, most of us first think of a loss as to us personally, especially by Western thinking, and if conditioned by Economic Man thinking. We think of an ecosystem as something remote and separate, not as a living entity on which we all depend.

Modern systems thinking has been afflicted by marketing different techniques coaching people how to do it. To stand out and be hired, a facilitator of dialog needs a distinctive approach to systems thinking. For example, the bygone Pegasus conferences promoted themes of coming together in mutual understanding. Reality was that facilitators softly marketed unique methodologies – an unspoken self-contradiction.

Other integrative managerial philosophies also stall in technique myopia because clients buy only techniques from consultants. Lean operations and total quality stall for the same reason. Managers can’t comprehend the integration of human relationships implied. Me-oriented, they rely on control of separate departments for competitive advantage. Managerial attention centers on the financial status of an entity man-defined by transactional boundaries – $ in and $ out. This system fosters fractioned, inward thinking. Comprehending the seriousness of external, ecological risks beyond the transactional boundaries does not come easily.

Monolog to Dialog to “Omnilog”

Many Western pioneers of systems thinking and dialog studied indigenous peoples. There is a reason.

Indigenous people like Native Americans regard themselves as part of nature, therefore inseparable from all other humans. Connectedness is embedded in their languages and cultures. Nothing about it seems strange. For example a greeting between two people implies “Hello my other self.” When hunting, a kill is not a victory celebrated by hanging a trophy on a wall; instead, thank the animal for sacrificing itself to hungry hunters.

Lacking this culture, Westerners seek systemic connectedness by reasoning through swamps of symbolism foreign to it. One was Martin Buber, a philosopher best known for contrasting “I-It” thinking with “I-Thou” thinking. “I-It” is Cartesian duality, or belief that all learning and experience is by me; everything else is an object to be exploited or analyzed — detached observation, not observation of phenomena of which the observer is a part. Both scientific reasoning and commercial reasoning remain dominantly “I-It.” Even so their fragmented, limited thinking frequently clashes.

Buber described “I-It” relationships as monologs, reasoning by talking to yourself. By contrast, “I-Thou” relationships are dialogs, seeking insight and meaning from other people and things. (Indigenous people raised in the wild amaze “I-It” Westerners by being uncannily tuned to every little change in nature going on around them.)

Buber knew that no one is “I-It” or “I-Thou” all the time, but one mode or the other dominates our thinking.

Dictionaries define dialog as a conversation between two or more persons. However, Buber, Bohm, and other dialog pioneers meant to go deeper. Participants should lay their deepest beliefs bare and listen to understand others when they do the same, and without judging them. The first objective is not truth, but to lay it “all on the table.” Expose to all our deepest hidden reasons for contention. From that, a social direction may emerge. Could conniving politicians bent on “winning” actually come to this?

For dialog to expose a situation, all viewpoints should be represented. For example, is there an empty chair for infants, for parks, for the ecology? Who speaks for the mute? Perhaps we should call this “omnilog,” learning exchanges from every direction, a human version of an internet of things (IoT), but communicating understanding, not mere action signaling.

If you have ever experienced it, a limited example of “omnilog” is a workflow guided by a visibility system. Well done, no one needs guidance. The system displays its own status so that everyone knows what to do without directives or meetings. It is a platform for collective operational learning too, but only to improve efficiency. To question the workflow’s long-term impact on the world, cultivate “omnilog” and dig deeper.

In this New Year we will be launching a program of Omnilog (or dialog) sessions that need to be accompanied by Deep Reflection in between. We hope you will join with us in exploring the possibilities on voyages of self-discovery.