Ours to Hack and to Hold: The Rise of Platform Cooperativism, a New Vision for the Future of Work and a Fairer Internet, Edited by Trebor Scholz and Nathan Schneider. 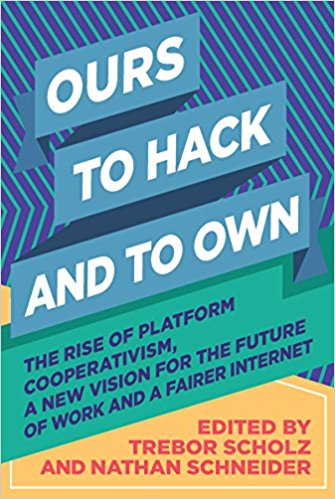 This book is unusual. First, it’s not to be released officially until August, but poke around and you can download a pdf. Second, the new release appears to be a milestone in a fast evolving book, ever under revision, a creature of the digital age. Third, and the reason for interest in it, is that Ours to Hack is a collage of articles by hackers and others interested in new forms of business organization, not just code. Last year, Trebor Scholz wrote a book castigating disruptive business models like Uber, and extolling “platform cooperativism,” the thread that holds Ours to Hack together.

Readers interested in up-to-date detail about “the sharing economy” and platform cooperativism can find a welter of it from a wide assortment of contributors. Itself a cooperative project, the book starts with outrage about abuse of sharing economy participants – er, workers. An example is from Mechanical Turk (participants receive tidbit tasks to perform on line). Many allege low pay, no pay, and no voice in how anything works. Such abuse is what platform cooperativism is intended to fix.

Some chapter writers foresee massive job outsourcing into the “shared economy” with murky issues ensuing. For example, will the public believe crowd sourced news writers? Or if they are even aware, will they care? So far, too many shared economy business models tightly control intellectual property, enforce secrecy, and take advantage of users. So much for digital idealism; human squabbles and treachery lurk in on line business models.

Most of the book dives into “how-tos” for platform cooperativism. You will learn about Copy Fair licensing, open value accounting, and panopticon psychology. A panopticon is a circular jail with an unseen guard observing from the center. The observer can’t focus on every prisoner at all times, but prisoners, not knowing when they are being watched, are likely to behave as if being seen. Today, do hidden cameras, computer cookies, keystroke monitors, and tracking bots create panopticon psychology?

There are too many nascent platform cooperativism experiments to cover. Just one is the CommonGood local currency credit system. The book describes its credit card as an “rCredit card,” a name that has already changed. The idea is to issue cards that card holders in a community can use to grant credit to each other, keeping score by their own accounting. If they build up enough credit, they can finance their own projects without dollars. (Fiat money is created by an authority issuing credit that people accept.) CommonGood is beckoning locals to opt into their start ups in Greenfield, MA and Ann Arbor, MI, and soliciting more communities to launch start ups.

A venture off to a rougher start is the External Revenue Service, a “peer-to-peer” tax system. The idea is that everyone is a philanthropist. Donate a percentage of your income into a pool each month, and you are eligible to receive funds pledged to you. Not sure how this works to build up funds, or whether it does. Not all ventures are well thought out, but readers can pick up a boatload of novel ideas.

Once though the parade of project ideas, contributors launch into the human side of organizing how to make platform cooperativism work, collectively presenting a comprehensive review of what makes a collaborative organization tick. As software enthusiasts, they dig into protocols like blockchain. They wisely note that blockchain only validates transactions, financial or otherwise, without trusted intermediaries, like old corresponding banks. It does not create the trust needed for cooperative work beyond trading.

Janielle Orsi’s commentary also stood out in a series of lessons-learned wisdom nuggets. She is a lawyer experienced in these matters. Everyone has to keep in mind what a true cooperative is and does:

A second interesting commentary is from John Duda, Communications Director for the Democracy Collaborative (or whatever it is called now). To truly emancipate people from corporate management dominance, any cooperative-like organization has to emphasize inclusion and messy processes of bridging values systems. The original wave of food Co-Ops were financially viable, but too exclusive. They became mere alternative market choices in food, and often upscale ones. They ushered in Whole Foods, not a revolution in supplying better food to all of us.

In John’s mind, the market system is broken. Market forces inevitably tend toward outcomes that are inequitable to the environment as well as people of limited means. To avoid the slippery slopes by which money calls the shots, co-ops should beware of accepting capital contributions that come with strings. Money contributors may mean well, but if they dominate, the organization does not end well.

Governance in the interests of all stakeholders is inherently unstable. Money talks, so big benefactors can stabilize an organization, but at a high risk of it losing its purpose over time. Keeping a collaborative organization nimble, but operationally stable is the challenge of our time. Those that have been successful long-term are not big; they can internally communicate at the ground level and work through changes.

Contributors to Ours to Hack migrated toward a common conclusion. A hot, genius-driven tech start up is unlikely to be a cooperative. Decision making in everyone’s interests would bog down an organization racing to grab a first-mover advantage.

Cooperative organizations may be necessary, or even be the only way that we can take significant action to live in harmony with nature. That’s a much more holistic objective than racing for the latest in technology, or even for the fastest modes of logistics to sew up a market advantage.

These conclusions are similar to those of the wave of alternative economics books coming out. For example, Tim Jackson has updated and re-issued Prosperity Without Growth, and he concludes that we cannot restructure our way from this economy to a new one without transforming “the damaging social logic of consumerism.” We need a system more consistent “with a deeper reality.”

Very predictably, Jackson’s single review on Amazon is a rant that hits the usual wall trying to comprehend this shift. The critic can’t see how anything can become better without economic growth promoting consumption in advanced economies and lifting people in Africa out of poverty. Any value system countering this is drivel to him. He well represents the worldview problem that all the authors are trying to work through.