The Patterning Instinct: A Cultural History of Humanity’s Search for Meaning by Jeremy Lent. 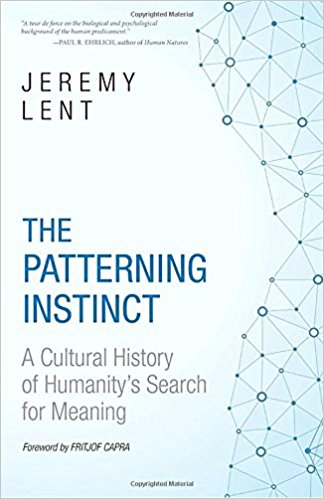 Jeremy Lent was founder and CEO of a software company in the Bay Area, and then become founder of the Liology Institute, seeking a way out of our environmental problems.

The first part of The Patterning Instinct is a deep dive into the values systems handed down from the ancients, including from all major religions. He is searching for the organizing principles of the universe, recognizing that reductionist Western science is unlikely to find them, but perhaps by recognizing complexity, we can get closer to a new conceptual framework that does not yet exist.

In his quest, Lent does not go far down the science path. He goes on an archeological dig into how mankind has evolved various constructs that have formed deep meaning for various cultures. He unearthed most sources that I knew about and many that I didn’t. It’s not so much the facts, but how you see and interpret them that have social impact. If a search for the metaphors, symbols, and concepts that shape our values interests you, you will enjoy the first half of the book.

All his cultural history funnels down to how shifting fundamental belief systems evolved into the fragmented, mechanical view of how things work, or ought to work, that has dominated Western thinking (and science) for at least three centuries. Along the way, Lent points out a number of dissidents that were ignored. Leonardo Da Vinci was one.

The final chapters dig into how our belief systems affect our quest to preserve nature. It depends on how we see nature. Do we see nature as a machine to be used, or as a foe to be conquered? Or is nature a vital adjunct to our own existence and something to fit into an overall web of meaning?

Lent describes the industrial economy as a self-accelerating treadmill of perpetual growth that cannot stop itself. Reversing into something that would even be steady state, much less shrinking would blow up the basic premises and values systems on which economic orthodoxy is based.

Toward the end Lent presents a full range of future scenarios: Kurzweil’s idea of computers taking over: Naan’s concept of technically enhanced man becoming a unified global superorganism; theories of total civilizational collapse; and one that he thinks has better likelihood: society will split in two. A rich high tech elite will live in technological nirvana; the rest of us will live in misery, if we can survive at all.

At present, Lent sees us as in a period of rapid technological change that is dislocating peoples’ sense of meaning in their lives. Living only to consume robs us of purpose. Many-sided, splintered values conflicts are driving political turmoil. Some new system would like to be born, but it is delayed by technological lock-in (no easy fall back systems) and by ideological lock-in because entrenched orthodoxies are tough to displace. In any case, the core beliefs of capitalism that got us here must yield to very different cultural beliefs to take us somewhere else. Fasten your seat belts.