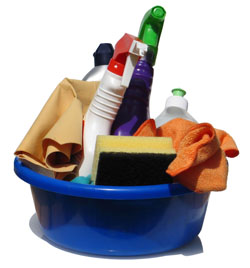 Marvin Klein and Syd Weisberg founded PortionPac in Chicago in 1964, selling to the institutional and industrial janitorial market that typically bought 5-gallon pails and 500 pound, 55-gallon drums of cleaning detergents. Decades before the book, they began acting on the kernel idea of Compression by pioneering a cleaning system using accurate and controlled concentrates in 2-ounce Pacs instead of shipping formulations that were 90% water.

Eventually PortionPac began to sell cleaning education, product and delivery all combined using one pre-determined Flat Fee, rather than sell just the products that the customer would order. Customer benefits are huge. To start, they are a cleaner building using much less detergent (and pouring less down the sewer), and janitors trained in a superior cleaning process. Longer-term, superior cleanliness eradicates a great deal of ancillary waste and cost. However, selling cleaning as a learning experience remains difficult because most customers’ cost and reward systems cannot attach a value to problems that never happen – prevention.

Acceptance of this concept came painfully, because improving a customer’s processes is a tough sell. Buying from the lowest bidder is much easier for purchasing to understand. In the 1960s, the average recommended dilution of the bulk cleaners was 20 to l or 25.6 ounces of concentrate to make four gallons of mopping solution. Unfortunately, no boss, supervisor, or janitor had any idea what 25.6 ounces looked like, plus no easy way to measure four gallons of water. The accidents, damage, waste, and confusion would merit writing a book.

The traditional industry laughed at portion-controlled cleaning, believing that PortionPac would reduce their sales. But, in actual practice most janitors used too little cleaning agent when handling these huge containers, and as a result had ineffective cleaning.

One big break occurred when Geerpress, the leading manufacturer of buckets responded to PortionPac’s request to be able to measure how much water was in a mop bucket. They added gallon markings on their equipment thereby simplifying effective detergent portion control. Today every bucket has these markings. Another break was when Admiral Hyman Rickover’s staff found that PortionPac saved valuable space on nuclear submarines and paved the way to a GSA contract that remains a key part of PortionPac’s marketing program.

Slowly, key accounts from large school systems and hospitals promoted the concept of proper usage. The industry responded with the same level of concentration, but dispensed from metering machines.  That was a major step forward but still lacked the accuracy and control of the PortionPac system.

Another obstacle was that the industry traditionally used very harshhazardous cleaning agents like acid bowl cleaners and germicides that adversely affect the health of janitors and housekeepers, plus the people whose facility they clean.  Portion Pac refused to make these products, but led the way in education, environmental conservation of resources, safety, and health; something that Marvin Klein is most proud of.

About 35 years ago a leading hospital found that PortionPac simplified assigning costs by the then brand new government reimbursement system. At the time Unit Dose drugs were revolutionizing medical care and Portion Control Food was revolutionizing the food industry. PortionPac clearly saw how sanitation, cost control, and productivity all fitted together. They built a network of distributors who promoted the concept.

Twenty years ago PortionPac adapted a system used in industry and began selling a “Flat Fee” or “Shared Savings” program. Instead of selling product,PortionPac monthly delivers the necessary product to each facility, along with the education, monitoring and support to help each account’s personnel clean effectively and safely. Under this Shared Savings program, both the buyer and the seller are committed to proper use, and usually, the cost of the program is dramatically reduced. Customers get a cleaner facility, but more important, savings in labor, purchasing, distribution, etc. Usage may climb when the program is introduced, but normally drops dramatically after support and education programs are implemented. The account becomes more profitable for PortionPac and the account reaches new levels of productivity and effectiveness. Many other long-term advantages come from avoiding ancillary expenses (like maintenance and repair) from poor cleaning that don’t show directly in customers’ cost accounts.

PortionPac is not your normal lean company because it aggressively tries to enable customers to have a better outcome while using fewer resources. In the future, it can probably do this even more effectively.

Although few numbers-driven commercial customers could understand this concept, PortionPac thrived in niche markets such as the K-12 School Food Service Industry, setting up a separate distribution program to sell and service these accounts. Now, over 10,000 schools monthly receive the products, education, support and documentation they need. This market was more receptive due to the buyers being Food Service Directors who understood portion control and welcomed support in the area of cleaning and sanitation. Savings in labor, accidents, and water, energy, and disposal costs are staggering. Less chemical goes down a sewer, and cleaner buildings prevent many other hazards and expenses. However, most of the commercial world remains blind to the value of a high quality outcome.

The hospitals, hotels and institutions on a PortionPac program are very satisfied. This is where the future of the cleaning industry lies, but unfortunately only one or two competitors understands its value. Much, much more should be done to promote this concept. Perhaps the engineering, architectural and business schools are beginning to understand the value and power of this simple concept: If a buyer and seller are on the same side of the table they can focus on results and efficiency instead of volume and cost.

From its beginning PortionPac emphasized the education of janitors. It has a full time Director of Education. PortionPac must explain that cleaning is critical to health and productivity…and that a system is necessary for someone to clean…that janitors need to be taught and supervised in following that process and that portion control detergents are a major key…and that the role of janitors needs to be respected.

Portion Pac has developed countless programs to help customers do these things. For example the Janus program explained that the term Janitor originated in Greek and Roman Mythology. It offered a program to anyone in the industry to help gain the cooperation of the people who manage and work in schools, hospitals, offices, industrial plants, etc.

The Corrections Industry is another key market for PortionPac, supplying many correctional facilities throughout the United States. In eight states PortionPac has set up packaging equipment in their Prison Industries to manufacture their own detergents. This gives job opportunities to inmates and it reduces prison costs. At the same time the prisons get educational support for effective cleaning and training.

Today leading universities, industrial plants, and government institutions use PortionPac to implement big improvements in cost-saving and sustainable programs managing their facilities. They are tagging onto an environmental movement that is still in infancy, still sorting out honest, effective programs from “Green Wash.”

Marvin Klein is proud of Portion Pac’s extensive line of Green Seal certified formulations, but it may take several more years for the mainline market to appreciate them. The environmental impact is staggering and two professors from the Illinois Institute of Technology documented them eight years ago.

Marvin feels fortunate to still be around to see the PortionPac concept moving around the world; very proud of being a pioneer of a movement gaining momentum in commercial and home cleaning around the world. This program multiplies its environmental impact in manufacturing, shipping, shelf space, proper use, etc. etc. Marvin does not measure success by top and bottom line growth, although like everyone, PortionPac does have to make money. Instead, success is leading an ancient profession to a new level of health and effectiveness where everyone will be a winner.

If you’d like to dig into Marvin’s approach to corporate leadership, you can get a short book he has written with Karen Wan, Idealistic Environmental Capitalist. It’s available on Amazon or www.idealisticcapitalist.com, which is worth a peek. In any event Marvin can be reached at mklein@portionpaccorp.com. And he’ll see that you get a copy.

Interview with Mike Dominak, retired Director of Purchasing for the Cleveland Library System, with thirty facilities to clean, and a long-time PortionPac customer.

Mike had been a purchasing manager for two different companies before being attracted to the Cleveland Public Libraries. He was surprised by the variety of buying the job entailed, and delighted to be free of the cost straight jacket that fogs vision in many businesses. The library did not measure his performance by initial purchase cost savings.

Mike could see that the PortionPac Flat Fee service could solve a lot of the library’s facilities problems, but he had to sell the idea internally. He teamed with the facilities manager to test the concept, and it worked, plus Mike had only one contract a year to administer. Purchase orders; inventory shrinkage; all that was gone.

When a new facilities manager arrived, unconvinced of the program’s worth, and disrespectful of the custodians, PortionPac came up with an on going education plan. Mike explained it to the library’s HR manager as a way to resolve problems with the janitors. The new facilities manager bought in when he saw that it both reduced the grievances he had to deal with and improved the quality of cleaning. Over time, everyone realized that keeping library buildings sparkling clean changed the atmosphere. The public did not litter, clutter, or abuse furniture and fixtures. Indirectly that contained a lot of other facilities expenses. In areas like antique collections, cleanliness obviously helps preserve the library’s collections. Dirt doesn’t.

Through the years when PortionPac trains janitors, the head of the library attends at least one session, and usually sessions for all three shifts. When janitors see the director participate in a demo on the proper method to wring out a mop, they know this is for real. It sends a message that your work is really important to the library.

So what’s the difference between Portion Pac’s Flat Fee service, and outsourcing cleaning to another service supplier? Not much if the relationship with the supplier was good, and their process equivalent, but that’s unlikely now. What the library is getting from PortionPac is a superior overall cleaning process that affects a lot of other things.

Budget hawks and cost-driven purchasing agents can’t see this. It’s tough for any of us to see things outside our normal frame of reference. However, there’s hope. In forty years in purchasing, Mike has seen purchasing gradually become more professional, meaning that more enlightened people look outside their rut to grasp process improvement and total cost. A purchasing agent measured strictly on purchase price variance is negatively motivated to lift her perspective outside that rut.

The moral of the story: Many companies now deploy lean thinking to make internal improvements. Many make environmental improvements in current products and processes. But to have major impact improving quality of outcomes while drastically reducing the resources used, they have to quicken their learning processes and take the daring leap to change their business models into full life-cycle propositions.  That is, they have to help educate their customers on how to do more while using much less, and let their most enlightened suppliers help them do the same.