Fuzz: Implying by Not Talking 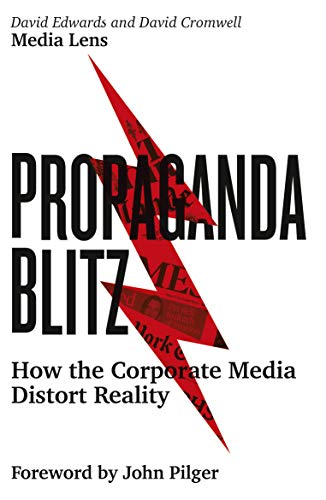 Neither Edwards nor Cromwell are practicing journalists. One was a teacher, the other a scientist. Perhaps that qualifies them to be objective media critics. That’s what they do through a British website called Media Lens that I’d never heard of before. Their book, just out, is a case-by-case blog of corporate media getting a story wrong and concluding that they exhibit a consistent bias in favor of big money.

Edwards and Cromwell attribute systemic bias primarily to the media business model called “how to escape the funding problem:”

A second reason for bias is the prestige of top journalists. They may never become billionaires, but as celebrities they are well paid for drawing audiences. They mix well with upper-crusters, and in time are apt to become imbued with monetized worldviews.

Edwards and Cromwell don’t waste time criticizing media that are openly biased, like Fox News and tabloids. Instead, put the screws to “liberal” media making a pretense of objectivity, like the BBC and The Guardian, but they still subtly cosy up to the money.

So what media are least biased? Sites like Truthdig, Counterpunch, ProPublica and other sites always begging for funds – and like it or not, Wikileaks, which releases raw, unfiltered information, not stories. When information is filtered and interpreted, it’s easier to digest, but subject to charges of “fake news” and infestation by trolls.

Edwards and Cromwell don’t dwell on obvious money bias, sometimes called “buckraking.” They focus on 10 cases of bias by omission. We only review two, Yemen and Climate Change.

This conflict is much like Afghanistan, Iraq, Syria, and Libya before it. Coverage rolls the schtick of the corporate warmongers over all news cycles, something like: ‘ Yes, Saudi actions are bad, but not as bad as others accuse them, and we must be realistic. Suffering caused by our own British government is necessary, so it could not really be a crime. Anyway all the horrible stuff is by the Saudis and we don’t control them, etc.’

This war is now years old. At the end of 2016, UNICEF reported that at least one child in Yemen was dying every 10 minutes. Almost half a million were severely malnourished. Nearly 2.2 million were in need of urgent care. Yemen’s health care system was collapsing. 58 hospitals had been bombed. And the Saudis delayed aid shipments for months. Two years later, Yemeni suffering is worse.

You’ve probably seen reports like this. A blip on the screen, hand wringing; then gone. Why the calm complacency? The British economic news spelled it out. Under Saudi Vision 2030, post-Brexit Britain sees $2 trillion in new investment opportunities. So could reporters just be more understanding about Yemen already? Don’t tie these stories together!

Days later, Hurricanes Irma and Maria landed. Climate scientists linked them to climate change, but if covered at all, as backstories. Edwards and Cromwell speculate that editors fear “politicizing” direct news coverage, but by caving in, they delay the body politic recognizing the situation. The Indian writer, Amitav Ghosh referred to this reticence in The Great Derangement, in which he speculates that climate change does not factor into fiction book plots because both writers and readers fear to think about it. Perhaps news editors suffer the same emotional blockage.

Government reports warning of climate change quietly sink from coverage. For example, a climate report from DEFRA (UK agency) that warned of urgent priorities wasn’t even announced by the agency when it was released in 2017. No mainstream media covered the release. Much the same happened to climate news out of the US EPA or NASA, even in the Obama administration.

But well-heeled climate deniers campaign to bury climate news as deep as possible. Prof. Robert J. Brule of Drexel University in 2013 issued a comprehensive study on the funding of climate denial. According to Edwards and Cromwell, a summary of Brule’s findings is, “From 2003 to 2010, 140 foundations made 5,299 grants totaling $558 million to 91 major climate denial organizations. These 91 organizations have an annual income of just over $900 million, with an annual average of $64 million in identifiable foundation support.” Some of the supporters of climate denial are well known – Exxon, the Koch brothers – but the majority of donations are dark money.

Edwards and Cromwell go on, concluding that climate change denial in the media is a “wholly artificial, manufactured creation,” easily debunked by those familiar with the science. It’s a fraud subordinating planetary welfare to the profits of a few. And the media play its tune in the name of “balance.”

Fatal complacency seems to accompany deep belief in progress. If your mindset is that everything must better and better, you tune out any message otherwise.

Most of us accept that a conspiracy theory suddenly blowing out on social media is probably fake news. However, Edwards and Cromwell contend that the mainstream media allowed themselves to sink into the Wild West of post-truth bloviating by letting themselves be used. For example, one US reporter admitted that his government sources treated him like a horse with a feedbag that they kept filling with rotten food. He knew it and they knew it. But neither stopped doing it.

Edwards and Cromwell think that the subtle self-muzzling of “leftist” mainstream media retaining a sheen of credibility is more dangerous than the blatant lies of pure corporate PR. Unfortunately, a complacent public with limited time to critically examine reporting may be taken in by any or all of it.

For what it’s worth, Reporters Without Borders just demoted the US media to 45thin the world, just ahead of Romania. The UK is 40th. The bottom of the barrel is North Korea at 180th. The US rating has been sliding downhill so slowly for so long that we don’t notice. Throughout the rest of the world, dedicated truth diggers notice.