Food and agriculture illustrate clashes between “learning organizations,” especially local ones, and industrial economies of scale to supply consumer societies. In industrial economies few people now grow what they eat or prepare meals from scratch. Instead they buy processed ingredients and plate-ready restaurant food. Research suggests that people who don’t cook know less about food and eat more processed foods. If given food from a food pantry, they may lack the skills to cook it, or lack anything to cook it with if they do. During the 20th century Americans transformed from a cook-from-scratch rural society into a “dumbed down” consumer society dependent on industrialized food systems. Just since 1955 the ratio of food expenditures in restaurants has risen from 25% to 47%. Restaurant sales kept rising despite the financial meltdown and job losses of 2008. And restaurants as a whole are a commodity industry, employing 10% of all workers to generate 4% of GNP. 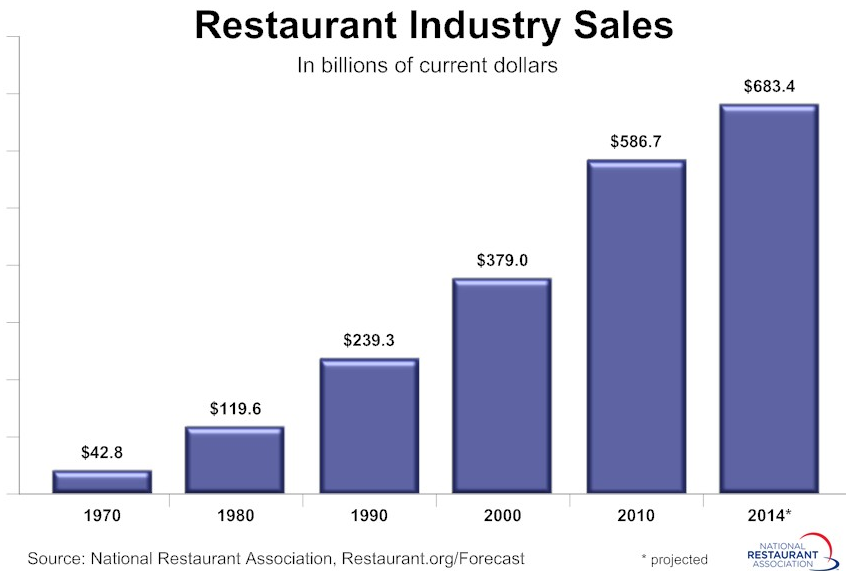 Surveys show that restaurant patrons are increasingly wary of health risks and prefer better nutrition over “factory food.” The obesity epidemic can’t be denied, and it is going global. Food industry critics are multiplying. The food industry issued a rebuttal before the release of the most recent muckraker movie, Fed Up. Among those who can afford it, a revolution from food quantity to food quality appears to be gaining traction. But will those who can’t afford it be stuck in an inferior system? For those who eat to live instead of live to eat, food chemists keep concocting new, new things. The creator of one of them, Soylent, actually named after the 1973 sci-fi horror movie Soylent Green, claims that drinking it confers optimum nutrition while wasting less time than fast food. Critics consider Soylent to be another canned diet drink little better than Ensure, and regard meals as social occasions, not pit stops to refuel. Another technical coup is 3D printing of food. Trial printing of steak made the news a year ago, but the present state of the art printing food that is actually being eaten appears to be more like 3D printing of intricate cake icing. As an industrial business model, Soylent standardizes and replicates high nutrition while appealing to convenience. On the other hand, printing your own food smacks of culinary adventure. On a large scale, both ideas might reduce the environmental footprint of the industrial food system, but both depend on ingredients that must come from nature somewhere, and both are now piddling in scope compared with big agriculture. To feed 7-9 billion people without degrading ecosystems, reducing food system footprints appears necessary. Instead, footprints appear ready to expand. China alone is estimated to increase its demand for corn by 41% by 2023. To do that yields will have to rise steadily, and global grain supply is so tight that forecasters fear that in a year when two or more major global growing areas have short harvests, many people in the world will go on short rations. Ukraine being one of those big breadbaskets, its political upheaval was feared to crimp output in 2014, but rural Ukraine remains, for now, near normal, and its weather for spring planting is better than in the U.S. Poor harvests from other political hotspots add to the discontent. Syria, for instance remains in extended drought. Ignoring farm and food woes in 2011 pushed Syrians to turn on their government, and conditions keep deteriorating. Food prices rose about 100% over the last year. Less land is planted and crop yield per acre is down – again. To avoid importing expensive food for millions of Syrians, the United Nations FAO has given seed to small holders, hoping that they can feed themselves from an arid hectare or two, with a little left to sell in a town, very much like the pre-industrial food system. How can people be malnourished and obese at the same time? Obesity is increasingly seen to be a manifestation of malnutrition. Obesity is more complex than overstuffing on calories. Even animals are fattening, both domestic ones and feral ones like rats that are parasitic on human foods. To describe this, the phrase “food insecurity” is taking hold. It refers to deficiencies in food quality, too little food, or a combination of both. Warning flags are flying on many diverse sources of food that add to quality balance in diets. Uninvolved buyers may assume that the market will provide – that professionals will routinely pull off miracles – but unfortunately, market demand for miracles is rising. Besides weather risks, diseases of both plants and animals are now rapidly transported all around the world. In the state of Florida alone, 19 pathogens are affecting crops. Lists of global crop pathogens are lengthening. Four crises occasionally make the news:

Conclusions: Industrial food epitomizes the self-deceptions of cheap-energy industrialization. Pre-industrial farming and food preparation had to work more in harmony with nature; the ability to overpower it was limited. System scale up had limits; one could not ship grapes between continents. Foods that were once occasional treats, when converted into daily commodities, may not be good for our health. Demand for manual labor is still high all the way through the food chain from farm to fork. If we could automate every process step between fertilizer and fork, would we create real improvements, or simply let our self-deceptions become grander and grander in style? That is, our own lack of wisdom has led to this predicament. Technology can now do a great deal that not long ago was impossible, but whether we should use it looms as a very big, growing issue because nature bites back. In many ways, we have let our desires exceed our actual needs, creating a type of faux quality, thinking that catering to every whim of demand represents quality. Furthermore the financial system emphasizes quantity over quality. To beat competitors, food companies design foods to hit “bliss points” that stimulate eating more of each brand – but collectively, what kind of plague have they unleashed on us? Profiting separately does not add up to quality of life collectively. That’s why we need to emphasize quality over quantity.